You guys MUST be relieved that this is my last Colorado post, no?

I know I am.  It’s a lot to recap!  There has to be a more efficient way, but I just have so much I want to say and share with you all.  God forbid I take a vacation longer than four days… oh wait… I am… later today.

Here are the first five posts of my Colorado recaps!

I left off with Sunday afternoon.  After our hike and dip in the pool, we rushed to check out of our hotel.  We debated heading back to this winery I spotted on Saturday before heading to Denver, but decided against it because it would have been in the complete opposite direction and it was already after 3pm.  Since we only had one night to spend in Denver, and a few hours the next morning before needing to leave, we wanted to make the most of our time there.

Cool picture of Coors Field I snapped during our drive: 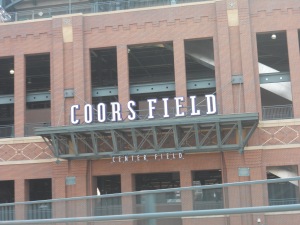 We checked into our hotel in Denver, and immediately headed out to 16th street. 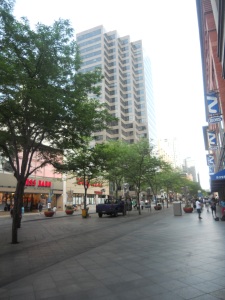 After walking around for a few minutes, I immediately wished we had stayed in Boulder or at least gone to the winery.  Walking around these city streets had a COMPLETELY different feel to it than walking around Boulder did.  Plus it was the hottest day yet, over 100 degrees even in the evening, and it was really just too hot to be walking around.  I thought it smelled and complained that Denver was a smelly city, but then Tim tried pointing out that Boston probably smells exactly the same when it’s 100 degrees here.  I guess he was right.

We eventually strolled down to LoDo, which I had been told really great things about.  However, nothing about it seemed that great to us?  The limited amount of shops it had were already closed, and the bar/restaurant scene just wasn’t hopping!  We chalked it up to first the heat, and second it being a Sunday night.  I got bummed that we made the wrong decision to stay in Denver instead of spending three nights in Boulder, but realized we had to make the best of it.

So we started bar hopping.

We first stopped in at another brewery, the Wynkoop Brewery, where I ordered a Wixa Weiss. 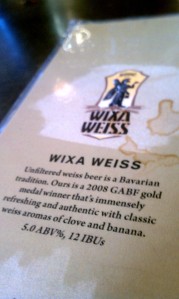 This place was fun, but nothing special.  Then I hated it because we asked our bartenders where the ONE place we HAVE to eat during our one night in Denver would be.  One of the bartenders gave us a restaurant we could go to in Boston.  The other was a pompous piece of CRAP, so condescending toward our question, and gave us the name of a made up place.  I hated him!  So we left.  Good riddance, Wynkoop.

Next stop was a place called The Oak Tavern.  We decided to go here after wandering aimlessly some more.  Nobody was in the bar.  And we had a dunce waitress.  I asked her what the Colorado Native was like, and she was like “Um, like, I don’t like really know, like I think it’s a dark beer, and like, um, it’s made in Colorado!”  Thank you for informing me that the Colorado Native is from Colorado.  Oh, and by the way, it’s a fruity amber lager.  Real dark!  This girl couldn’t think of a place really to recommend us for dinner either.  What the heck!?  Don’t Denver people like any of their own restaurants?

For bar #3, I needed something strong.  Like a margarita.  So we went to The Black Crow.  Which was a cute Mexican place with a fun patio.

They did have tasty margaritas, but they were kind of small.

And their chips + guac was super tasty, but again small portions.  You pretty much had to lick the giant piece of lettuce to get enough guac for the chips.  Oh and the waitress spilled the salsa on my dress.  Grrrr.

At this point, we were realizing that it was just not our night, and we still needed to eat.  So we went to The Mellow Mushroom, per Tim’s sister’s recommendation.  And it was pretty good even though it still wasn’t the vibe we were going for.  I guess we were just being picky, and maybe these places would have all seemed fun had it not been for the servers we had and again, the Sunday night empty feel to all of them!  But at The Mellow Mushroom we had a nice bartender that we enjoyed talking to, we were able to eat dinner, and we made some new friends.  I also gave up on pictures for the rest of the night.  After we made new friends, they brought us to this little Irish hole in the wall that I forget the name of where Tim and I spent our last hours out talking to two Denver cops.  That was the best part of the night!!

On Monday we only had a few hours to do something before our flight, so we decided to get touristy.  Our first stop was Washington Park. 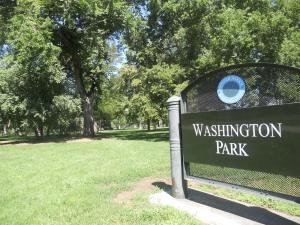 Denver is known for having one of largest parks and recreation systems, so we wanted to stroll around at least one of them.  This one was very pretty with some water in the middle and lots of gardens. 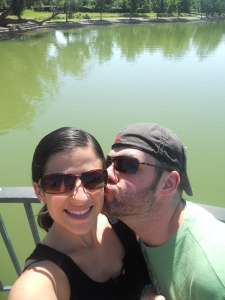 It was too hot to be out in that sun for too long, so we had to get back in our air-conditioned car after a bit.  We decided to finish off the morning by checking out the Capitol Hill area.  Here are my touristy pics of the capital, civic center, art museums, etc downtown:

This next building is the Denver Art Museum — it was built with no right angles! 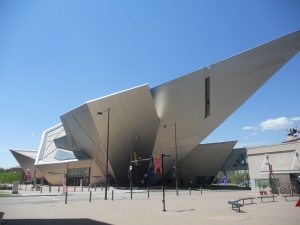 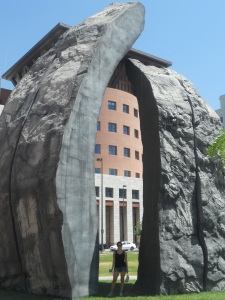 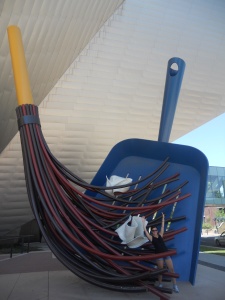 And these dancers were in front of the Performing Arts Center!  I obviously loved them, and then missed my PCDC girls.

My final thoughts on Denver — there is a ton more I wanted to see and do, not sure I’d be dying to go back after not totally loving the nightlife, but again it was a really hot Sunday night so I think we just had bad luck with the night we were there.  The city really does have a lot to offer.  So – we’ll see!

Travel home – We had long (and separate) flights home, but I was able to finish up book two of The 50 Shades series (I finished book three of Hunger Games on the way there).

Who’s been to Denver?  Thoughts / comments?

And that’s it!!  Totally awesome weekend getaway, it definitely needed to be longer and if we go again I would want to stay more nights.  Now I’m off to Ryan and Jenna’s wedding and then vacation #2 of the summer, a week down the Cape!  I’ve been off work doing fun things around Boston since the 4th, but this week I’m completely unplugging.  No worries, Fitness & Feta will still be up and running – I have a bunch of fun and exciting guest posts coming your way from friends and fellow bloggers.  Be nice to them and leave them lots of comments, okay!?