What the Fluff and Other Fun

It started off right, with a workout of course.  I tried a new studio, Boston Body Pilates, with Ashley.  We took a barre class, and it was nice to change things up from my normal routine.  I still have two more classes to use with the Gilt City deal I purchased so I’m looking forward to going again.

Union Square What the Fluff Festival

Then we completely counteracted our morning workout and headed over to Somerville with Slesh and Katrina for the What the Fluff Festival.  I’ve wanted to go to this festival for a while now, so I’m glad I was finally able to!  The creator of fluff actually invented it right in Union Square, so every year Union Square blocks off its roads and celebrates the fab creation with games, contests, music, and well… fluff!

It was cloudy out, but luckily the rain held off.  Otherwise we wouldn’t have gotten to enjoy things like fluff pizza.  Yes, I just said fluff pizza. 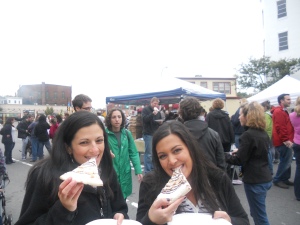 That slice of za was good, but a bit chewy.  If I go to the fluff festival again, I would opt for a Fluffernutter instead of an entire slice.  I think mini pizza slices/bites would have been ideal.  There were cupcakes too.  Lots of cupcakes.  I’m still thinking about that peanut butter and fluff one and want to recreate it. 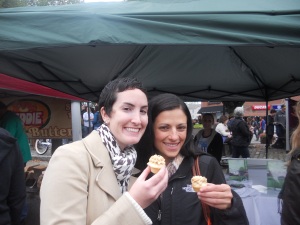 Teddie’s Peanut Butter (my favorite!) had a booth set up and were handing out samples of different nut butters spread on crackers.  I tried the chunky with flaxseed, which I can rarely find in my local grocery store so I was excited about that. 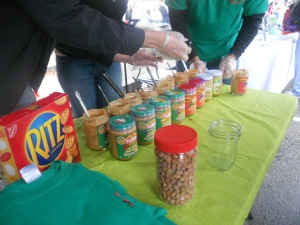 Teddie’s also had a “guess the number of roasted peanuts” contest.  I entered and I’m still waiting for the phone call telling me I won.  Junior year of college I won my school’s candy corn count.  Then senior year my roommate Erica won it and we laughed and laughed and laughed.  We like to think that we’re the most excellent estimators out of ALL the people from Providence College that MUST have participated in the student center’s “Things for Thursday” activity… but some like to tell us that probably not many people entered as we think.  I call bull.

Anyways, the girls and I ended up eating so many sweet things that we were craving something a little more substantial with salt by the end.  I split a hot dog with Slesh.  Not just any hot dog.  A jumbo beef.  I told the man, “I’ll have the biggest beef you have.”  I’m awkward.  And I haven’t eaten a hot dog in over a year I want to say.  YUM.

It was a fun day at the festival! 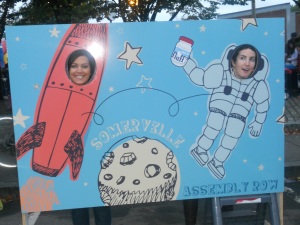 On the way out, I snagged Tim some treats from the cooking contests… I have no idea what this was.   Except delicious.

The fluff festival was definitely fun, but I think it’s something that’s nice to see what it’s all about and then you don’t really need to make a point to go again another year unless you just happen to have nothing to do or you are in the area.  After the festival we headed back to Slesh’s apartment where we hung out for a while, before getting ready to… well.. eat some more.

Saturday was definitely my cheat day, can you tell?

I immediately loved the vibe in there.  We stood at the bar for a while since we had to wait for a table, but the delicious Doc’s Hard Pumpkin Ciders kept us entertained and they had a ton of beers to choose from.  When we finally did sit down, I decided I was craving GREENS since I had stuffed my face with fluff all afternoon.  I ordered the “Grazing Plate” which consisted of red quinoa with garlic green beans, carrots, baby Bok Choy, Chinese broccoli, and grilled corn with herb vinaigrette.  This completely hit the spot for what I wanted since I was still a little full.

Fun dinner!  After dinner sadly Ashley had to head home, but she dropped Slesh, Katrina, and I off in Central Square where we finished the night dancing to a funk band at Cantab Lounge.  Holy weird people watching there.  I loved it though!  Something different.

We finished out the night with a little slumber party at Slesh’s!  Sunday morning we slept in, then drank coffee and chatted some more before I finally dragged myself out of there. 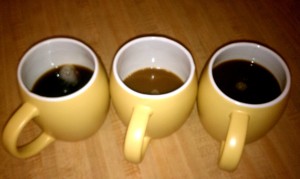 Was such a nice time… I miss my roommates!

What’s the weirdest fair or festival you’ve ever been to?   Locals — anyone else been to the Fluff Festival before?