Tonight I finally got around to uploading all my vacation pictures from Portland.  And then I got sad because I want to be back there.  Wah.  Anyways, here’s a recap of all the yummy food and drinks we had during our week away!

Before leaving for Maine, we reached out to everyone we knew for restaurant recommendations.  We got so many recommendations that we didn’t know what to do with all of them!  We tried our best to make it to all the big ones, but we’ll just have to go back to get to them all.

Duckfat
One of the places that almost everyone said we had to stop at for a casual meal was Duckfat, a small little sandwich place right down the street from our hotel.  When we arrived on Monday it was pretty chilly and cloudy out, so we figured this would be a great place to grab our first lunch of the week.  It was a small restaurant, with some parties even sharing tables, but it definitely made for a unique experience!  I ordered the duck confit panini and Tim ordered a pork belly panini.  Both were delicious!  We also split fries.  I normally do not like French fries, as potatoes don’t really do anything for me, but I figured I at least had to try the infamous fries in duck fat.  And I did like these.  We also had our first beers to kick off the week!  They came in mason jars, which I loved. 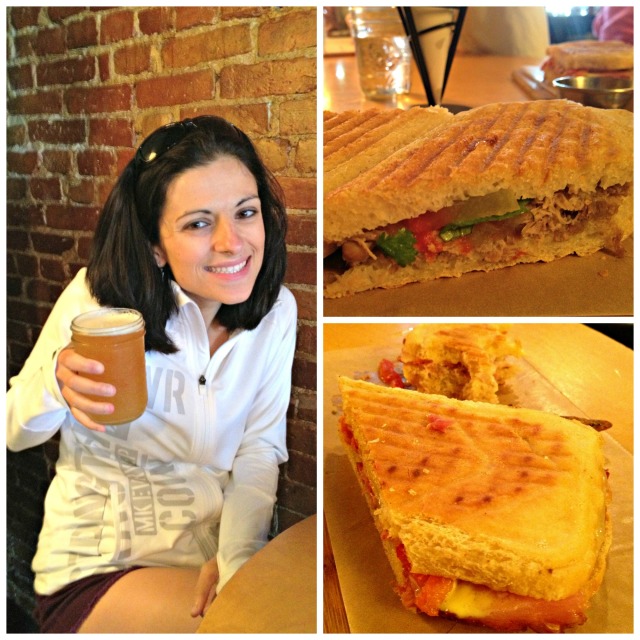 The Garden Cafe at the Regency
After walking around the downtown Portland shops for a few hours on Monday, we stumbled across a cute little garden restaurant called The Garden Cafe.  This restaurant/bar is associated with the Regency Hotel, but it was the perfect place to hang out and get a drink.  So pretty!  I ordered a glass of wine and finished that up with the most delicious strawberry vodka lemonade.  I highly recommend this place for a drink on a nice day. 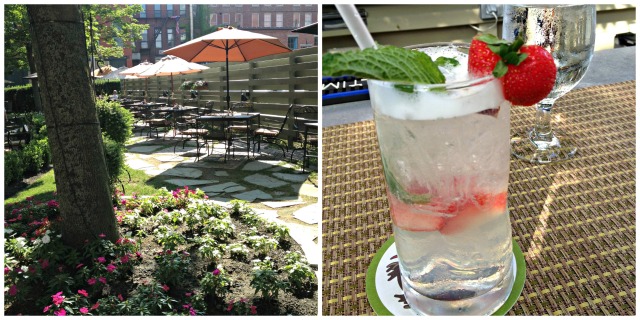 Sonny’s
On Monday night before dinner, we stopped at Sonny’s for a pre-dinner drink.  My friend Cristin recommended this place for its cocktails, and I enjoyed a glass of their house made white sangria.  We wanted to go again another time during the week, but we unfortunately never made it back. 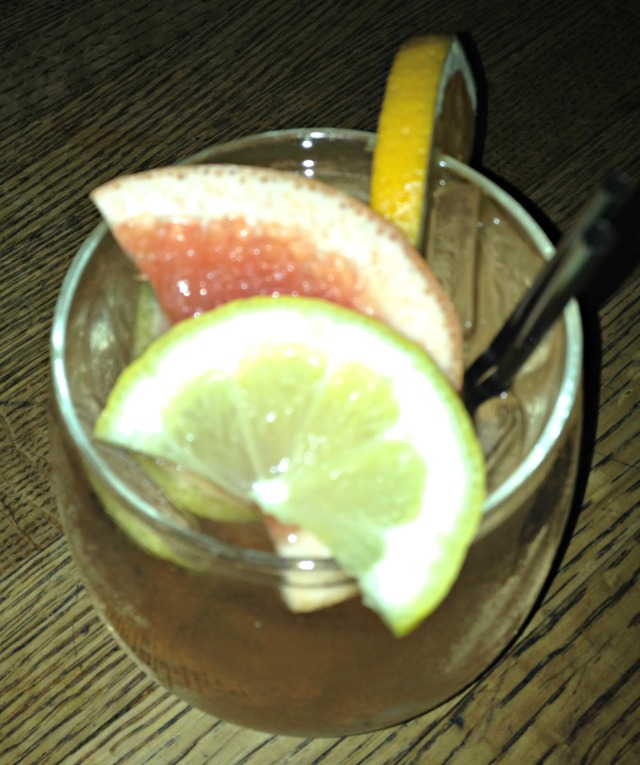 The Grill Room
Dinner on Monday was at The Grill Room & Bar, which was recommended to us by the bartender at the Garden Cafe earlier in the day.  After taking a while deciding whether to each get one big entrée or to go for several smaller dishes, we decided to just a few  smaller options.  First up were the oyster shooters, then wood oven baked brie, then two scallops, and last up was lobster pizza.  We both agreed that the brie was the best of the bunch.  I also think my stomach regretted ordering so much bread the next day! 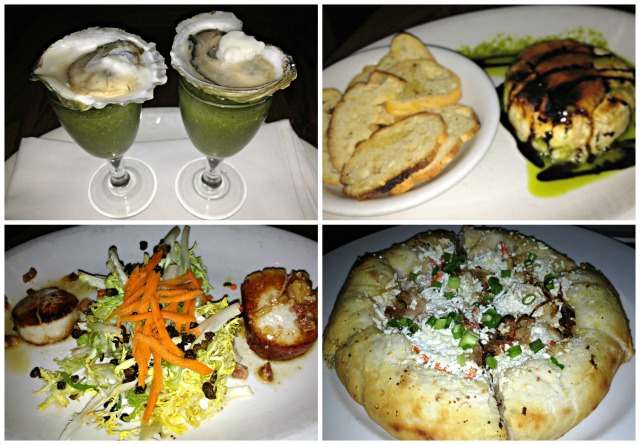 Gorgeous Gelato
On Tuesday we spent the day at Scarborough Beach State Park, so of course gelato sounded perfect after a day in the sun.  My co-worker Mike recommended Gorgeous Gelato, and it did not disappoint.  This place is owned by a family right from Italy, so you just knew the gelato was going to be good.  I ordered raspberry.  Yum! 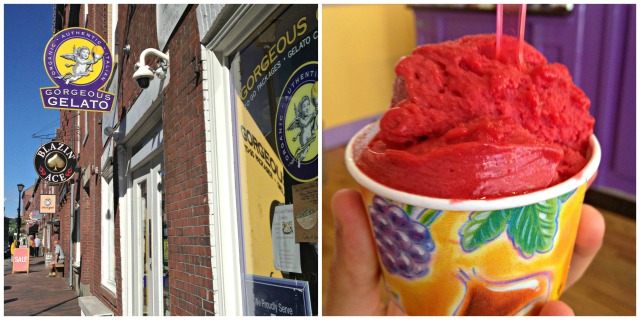 Gilbert’s Chowder House
Tuesday night after the beach, all we wanted to eat was chowder!  We headed to Gilbert’s Chowder House, which we heard had some of the best chowder in the city.  We both got pretty big cups of seafood chowder, so that’s all we needed for dinner that night.  Went pretty nicely with a Shipyard Summer Ale.  I liked this place because it was casual and right on the water.  We ate on the back patio before heading next door to the Portland Lobster Company for some live music and more beers. 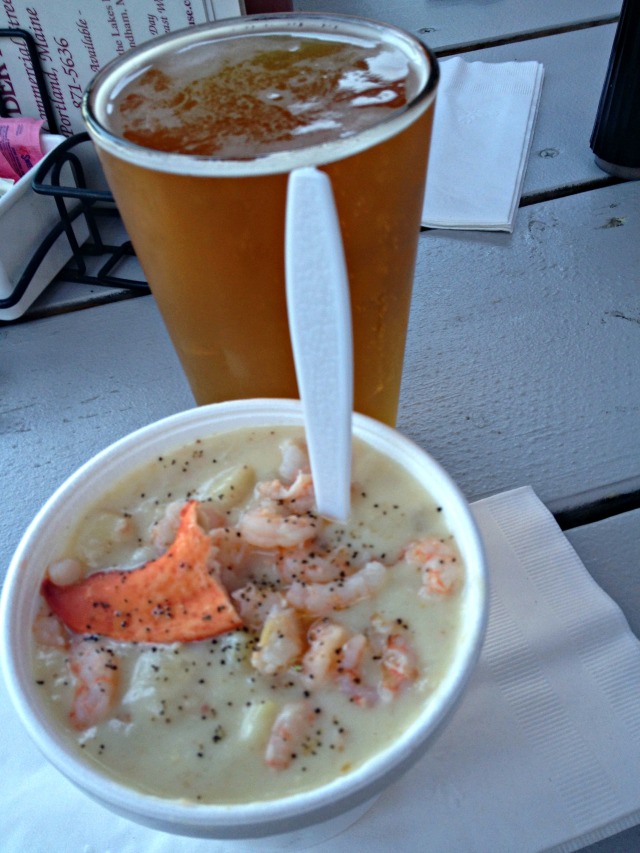 Spread
Spread was our last stop on Tuesday night.  We had passed it on Monday and thought it looked neat.  The restaurant itself seemed a little big and upscale, but their interesting drinks were enough to catch our attention.  My drink of choice was gin with muddled strawberries, bail, fresh lemon sour, and a balsamic vinegar reduction.  And Tim got some crazy blood orange tequila drink with jalapeno. 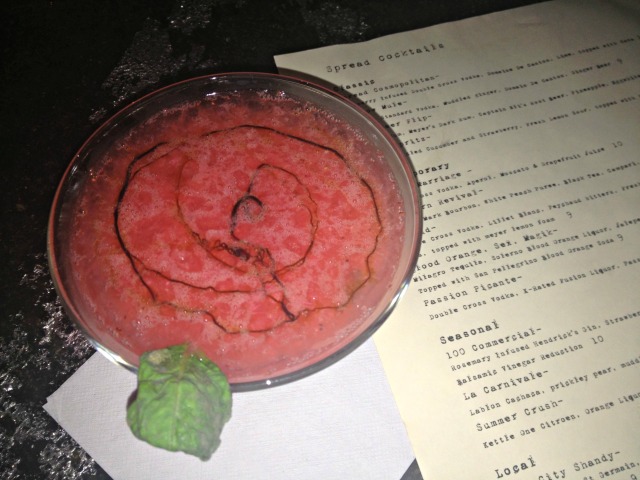 Federal Jacks
One of my favorite stops of the week was Federal Jacks Restaurant & Brewpub.  On Wednesday we took a day trip to Kennebunkport, and while we really wanted to check out Earth, we just weren’t appropriately dressed for something like that.  We loved “Feds” because it had the prettiest view, the most amazing beer EVERRRR (Shipyard Sunfish Wheat), and really good food.  I ordered the blackened haddock tacos after splitting mussels with Tim.  Apparently this place turns into a dance scene with a DJ, but we headed out before it got like that. 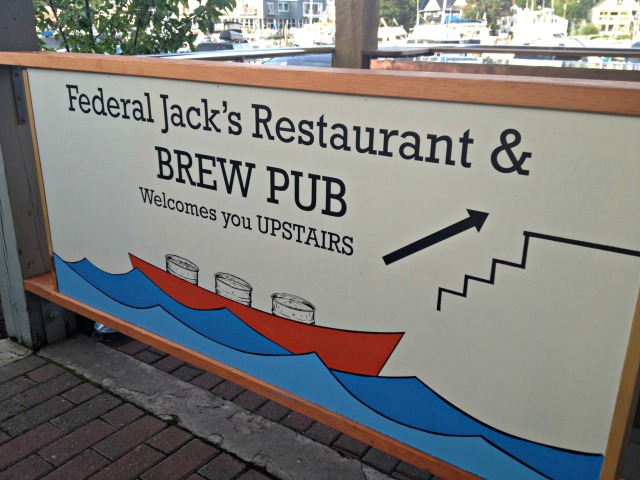 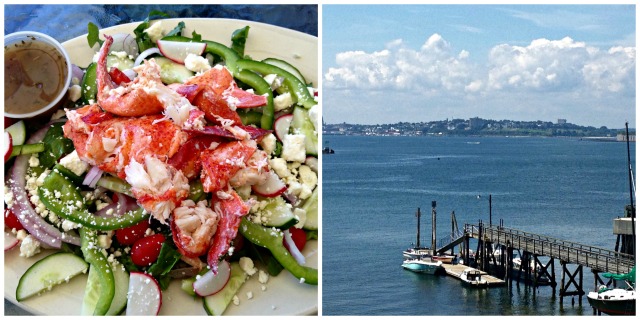 Fore Street
Our dinner at Fore Street was by far our favorite meal of the week, which didn’t surprise me because six different people recommended it to us.  It doesn’t look like much on the outside, but don’t let that fool you!  We loved that the menu changes every single day there.  I ordered flounder with greens over a tomato and mushroom sauce.  Tim ordered roasted duck with risotto.  And we split a side of heirloom tomatoes.  Everything tasted so fresh!  This was a top-notch dining experience. 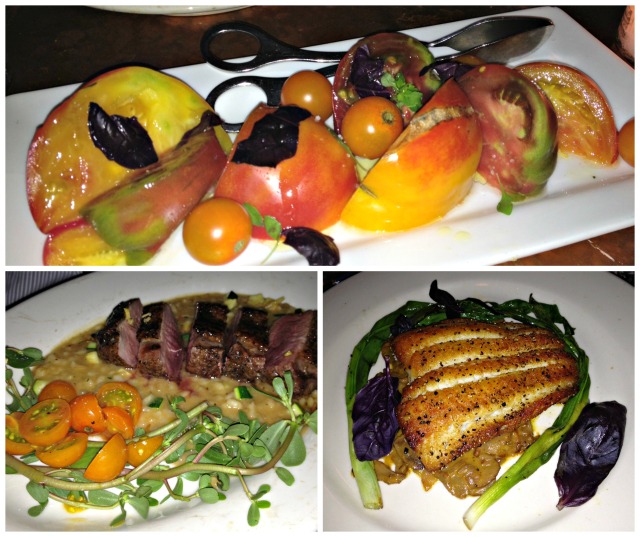 The North Point
Another week favorite of ours was the bar we went to after Fore Street on Thursday, The North Point.  Although we had really good cocktails at Sonny’s and at Spread as I mentioned above, this was my favorite cocktail place of the three.  It was smaller and cozier inside, and the staff were super friendly.  I think it still had an “upscale” feel, but without seeming “la dee da” like at Spread.  They had a pretty big wine list and ten beers on tap, but I went a little martini crazy this night.  Cucumber and peach martinis for me! 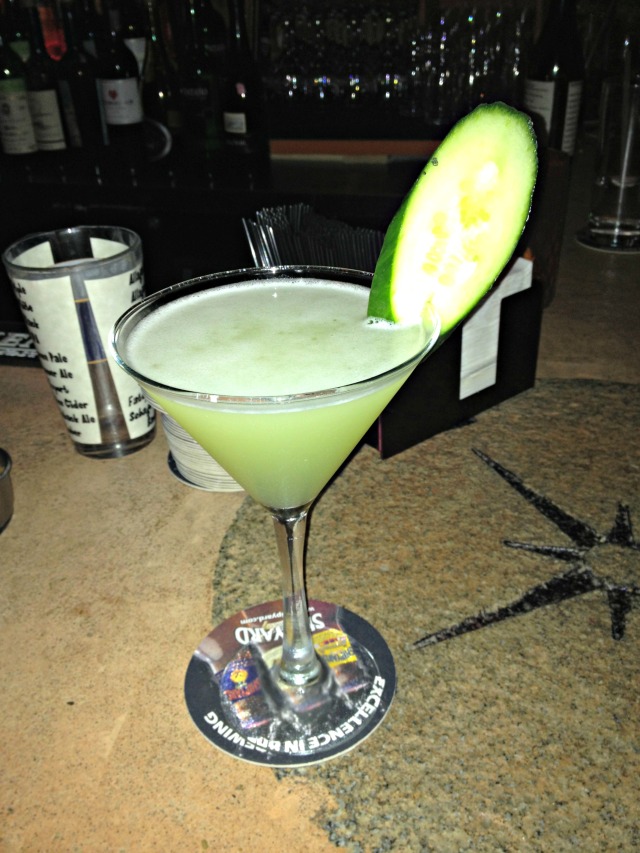 The Front Room
When we woke Friday morning, it was raining and I had a headache from my martinis the night before, so our Greek yogurt wasn’t going to cut it for breakfast that day.  We met a couple earlier in the week who recommended The Front Room (sister restaurant to The Grill Room) for its brunch menu, so we decided to check it out.  We had to wait a long time, but that didn’t matter much to us.  I ordered three items off the sides menu – a fruit bowl, whole wheat toast, and 2 eggs over easy.  Tim’s breakfast was eggs benedict, but instead of over an English muffin it was over gnocchi, and instead of ham it had thick cut bacon.  His was more exciting than mine, but at the time, mine was exactly what I wanted. 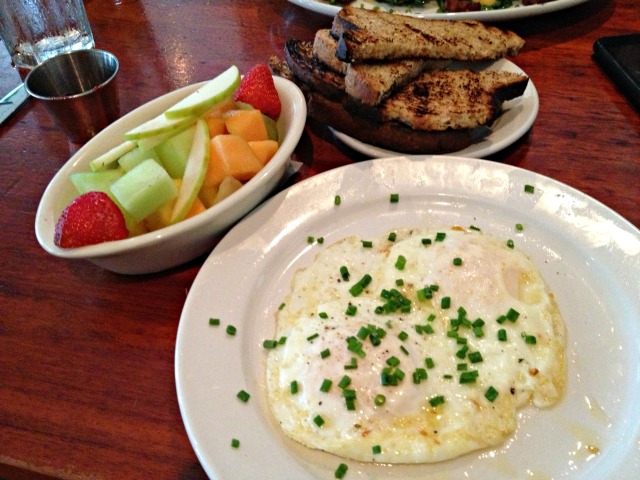 DiMillo’s
While I definitely don’t recommend DiMillo’s for food (we had eaten there a few years ago for my birthday and were not wowed), Dimillo’s is a Portland experience because it’s a big floating restaurant in the middle of the seaport.  On Friday we went there for a drink to enjoy the weather before lobstering. 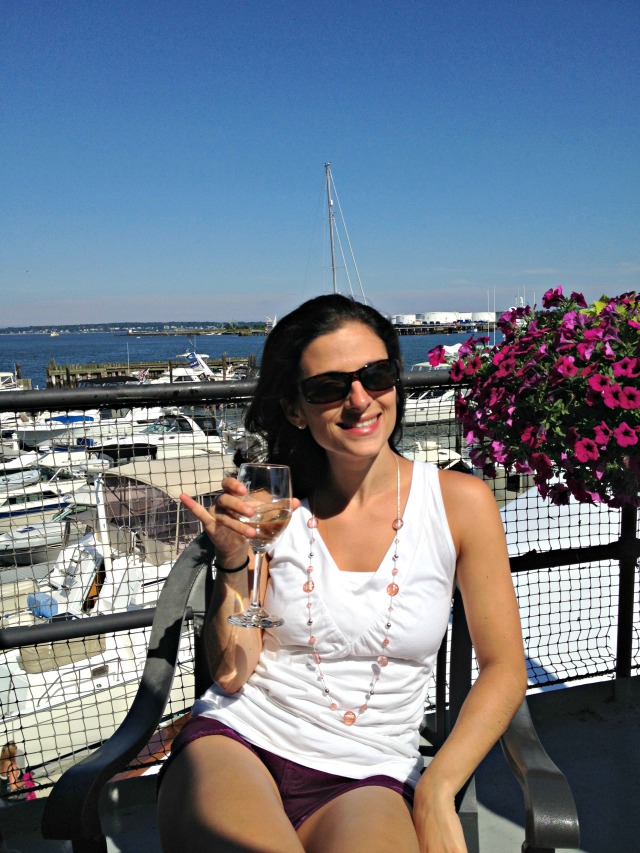 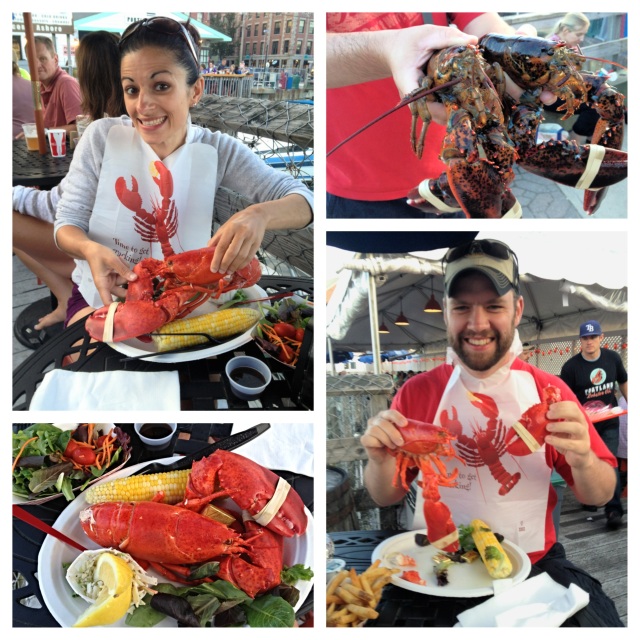 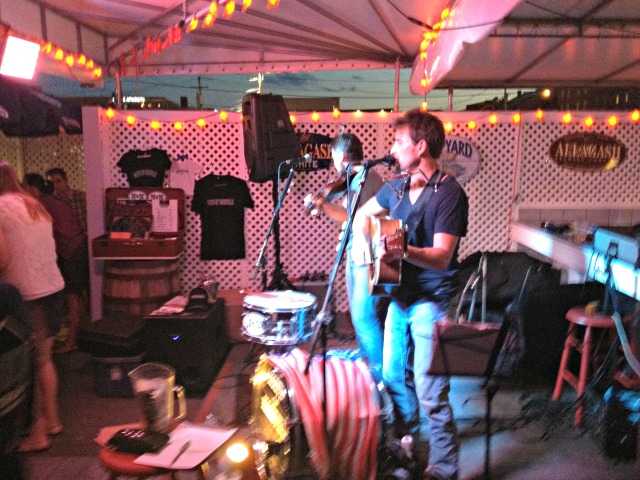 Novare Res Bier Cafe
I keep saying every restaurant was our favorite, and bloggers saying everything is their favorite is a pet peeve of mine), but Novare Res was honestly another favorite!  So I’m saying it!  This place was somewhat hidden, but has a HUGE back patio with tons of outdoor seating, cornhole and outdoor darts games, and over 100 beers to choose from.  Beer lovers, a must visit if you are in Portland! 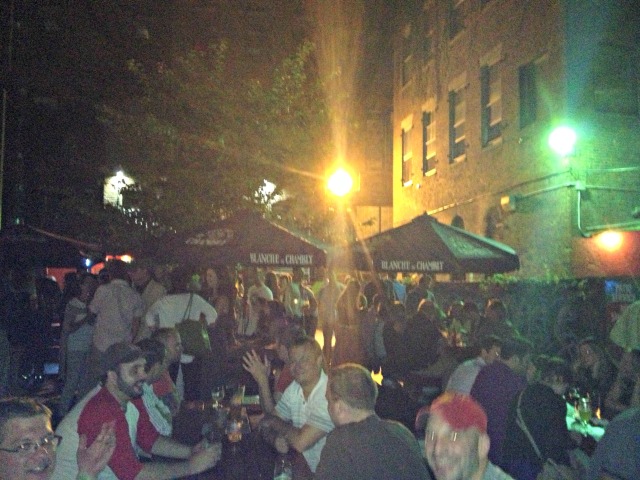 Billy’s Chowder House
For our last day, we headed to Wells Beach, so before heading home we were on the hunt for one last seafood meal.  We thought we picked a decent choice with Billy’s Chowder House, but unfortunately, this was my least favorite meal of the week.  The chowder was very good (thinner than most chowder I usually eat, but the chunks of clam in there were unreal), but my scallops were so disappointing.  Which is ironic since the menu told me they would not disappoint.  They were under-seasoned and my fresh veggie side was a bowl of super buttery corn.  Totally not the way I wanted to end our trip, but I guess one food disappointment isn’t too shabby. 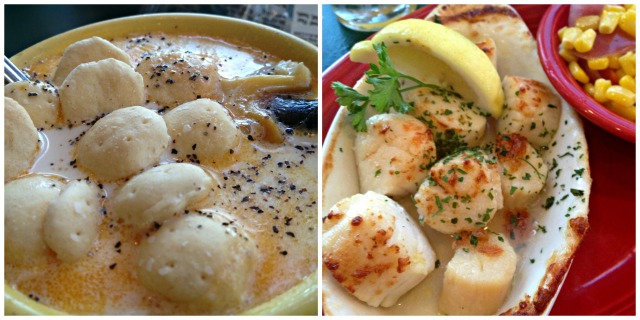 Although it probably seems like going out to bars and restaurants was all we did, it’s not!  We had a ton of other fun day trip activities that I’ll recap soon, and we did come prepared with other food as well.  We had most of our breakfasts packed and several options for lunch on the days we didn’t go out to lunch.  We brought along cold cuts and bread for beach sandwiches, and I also brought along a big batch of my favorite cucumber salad.  Half the reason we love the Residence Inn so much is for the full kitchen in the room.  Other things we brought along ahead of time included almond flour chocolate chip cookies, almond flour banana muffins, carrots and hummus, Clif bars, cashews, peanuts, crackers, and lots of fruit – bananas, strawberries, plums, and nectarines.  Doing this helped us stay on track when we weren’t splurging, but it also saved us some money! 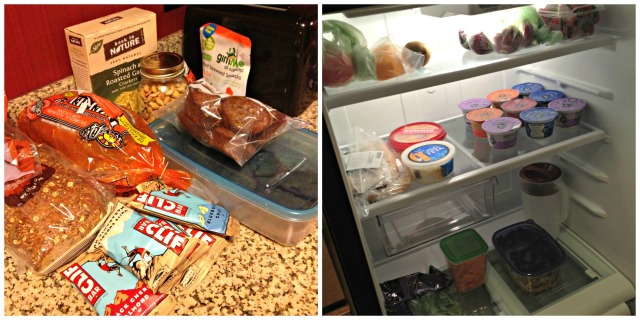 Unpictured in this post are Gritty’s Brewpub (Tim’s favorite!) and Sebago Brewing Company.  Gritty’s for beers and live music after Kennebunkport, and Sebago for late night food on our last night.  Whoops!

Have you been to any of the restaurants I mentioned above?  What Maine favorites did I miss that I’ll have to check out next time?