I’m excited to chat about a new restaurant with you guys today. It’s a good one! 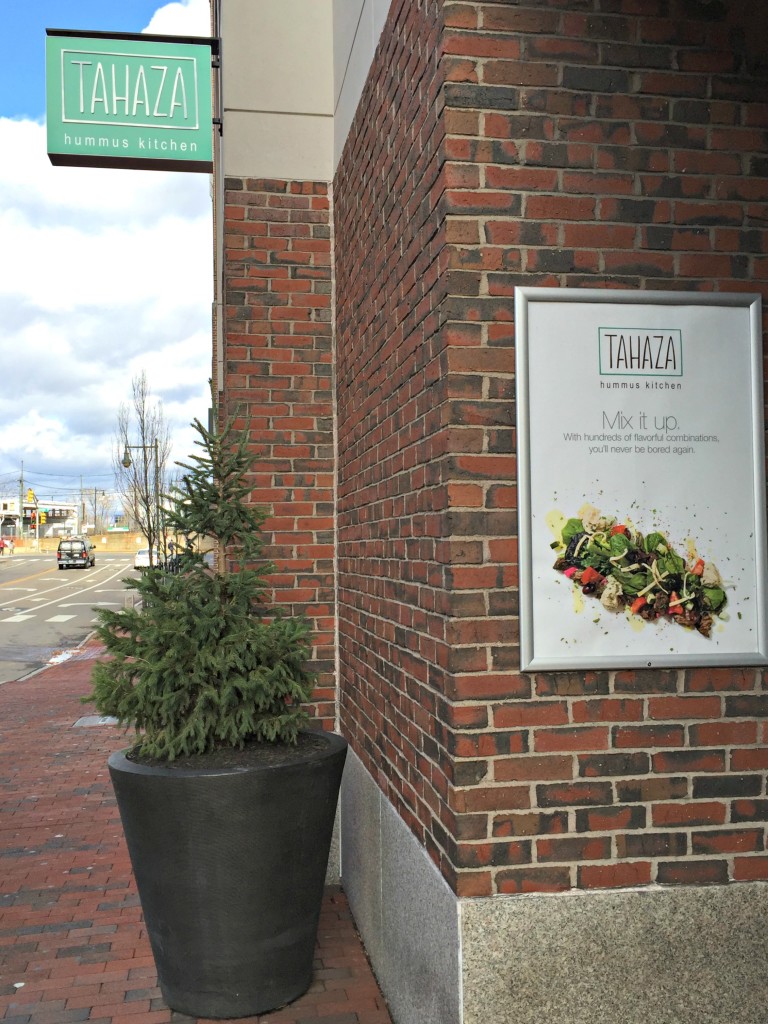 Tahaza Hummus Kitchen opened only about ten weeks ago in Cambridge, just minutes from the Lechmere T stop and Kendall Square. When the folks at Tahaza contacted me to see if I’d be interested in checking out their menu, I was obviously in. A restaurant focused on taking a fresh approach to Mediterranean food? Sign me up. 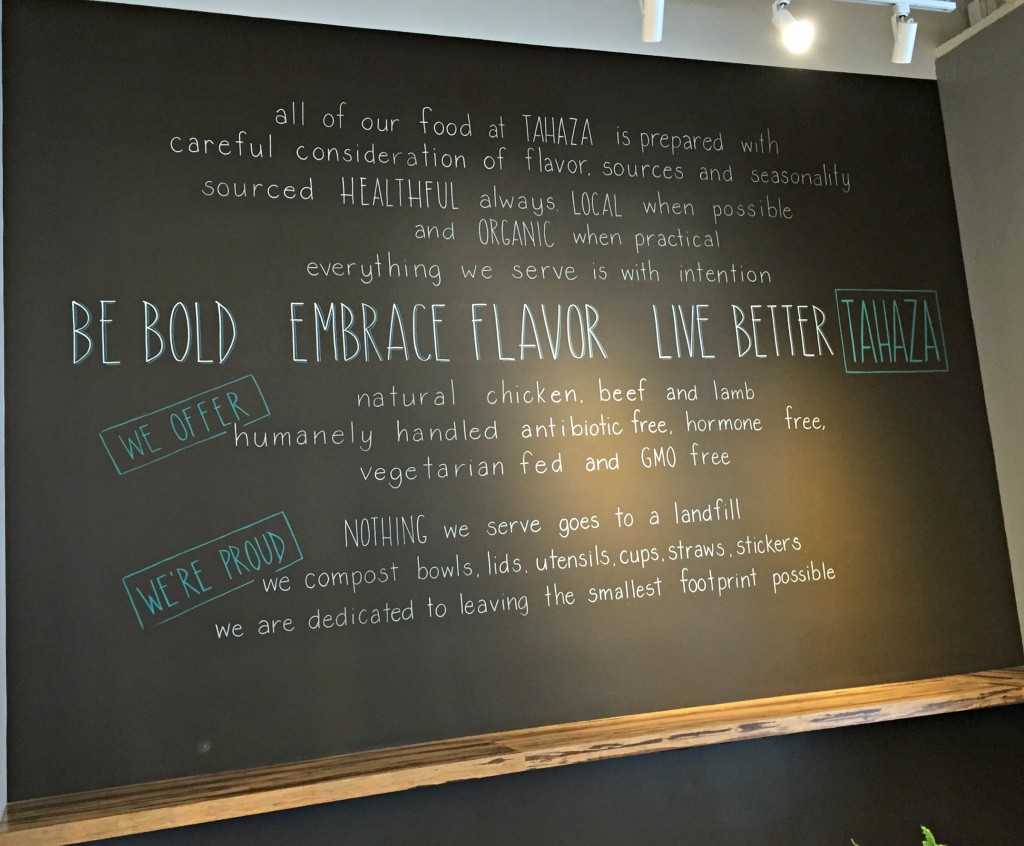 Tim and I scheduled a little lunch date together to see what this hummus place was all about. When we arrived, the owner Emily was behind the counter. She greeted us with a warm smile right away and gave us the run down on how Tahaza’s menu works.

First you have to decide whether you want to design your own hummus bowl, warm grain bowl, wrap, or salad. If you have little ones, there’s also a children’s menu. 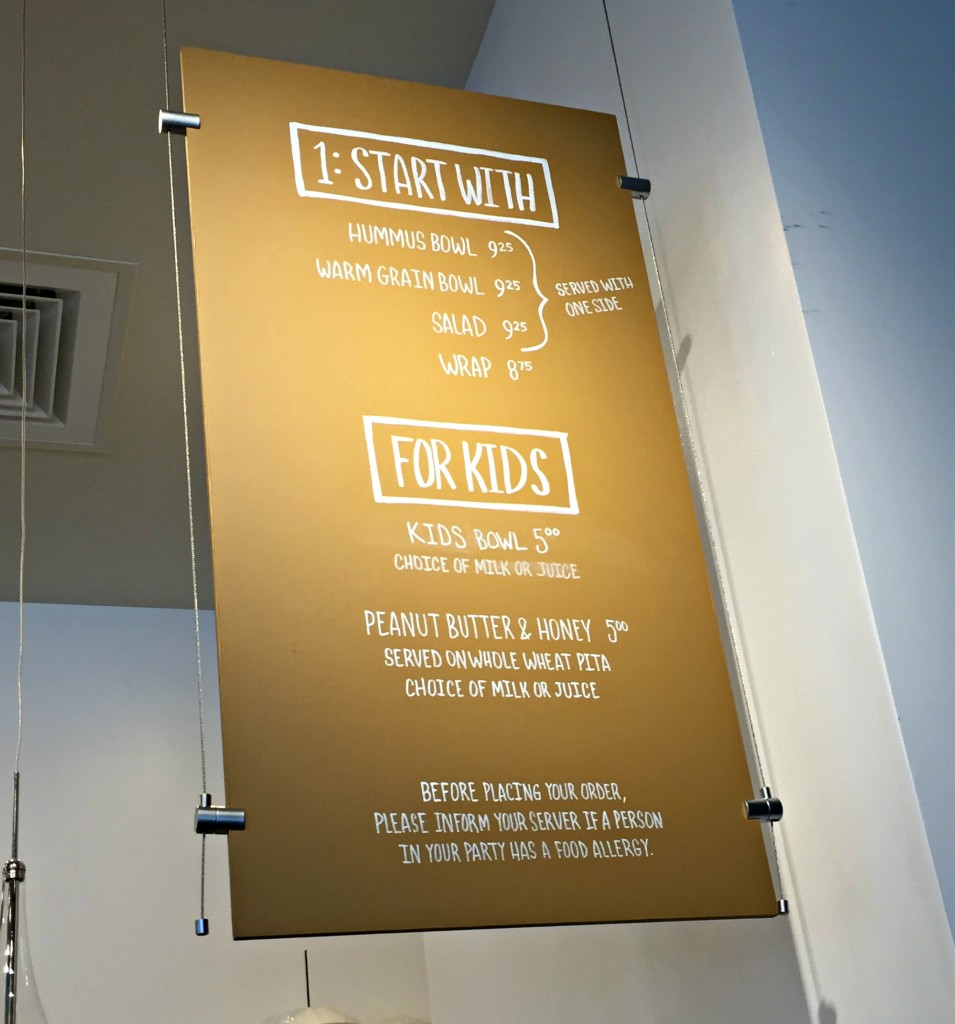 The next step is to add hummus! During our visit, we asked Emily to tell us a little more about what inspired her to open a restaurant with hummus as its central focus. She told us that she used to be in a teacher in London, and people there used to enjoy hummus as a staple in their meals, not just as a snack. Emily thought this would be a cool idea to bring back to the United States, especially considering all the health benefits that chickpeas offer. After some hemming and hawing, her husband finally convinced her to bite the bullet and go for it. The result? Tahaza Hummus Kitchen! 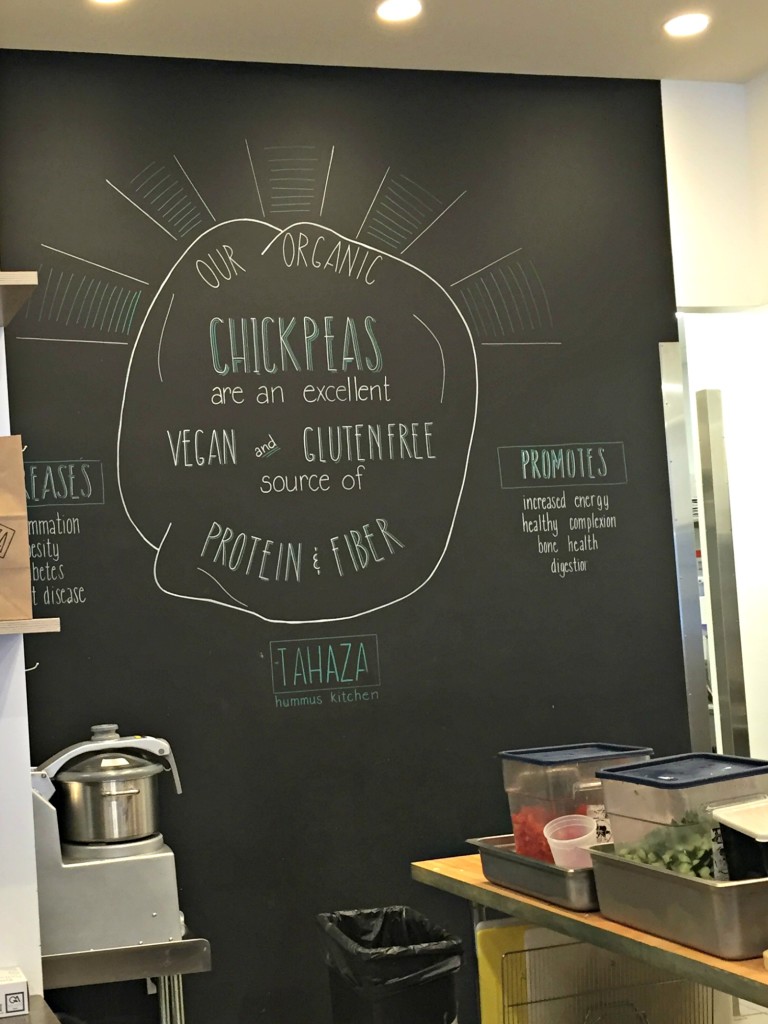 If opting for a hummus bowl, grain bowl, or salad, the hummus gets spread as the base of your dish. Tahaza had three hummus flavors available when we went in: their unique spin on original, roasted red pepper, and beet. We learned that the hummus flavors often change seasonally, and that you can get your bottom hummus layer spread in two flavors if you are having trouble deciding. I decided to try a hummus bowl that used half original and half beet, and Tim decided to try a grain bowl with the roasted red pepper. When Tim and I go out to eat, we almost never order the same thing because we like to try each other’s and compare! 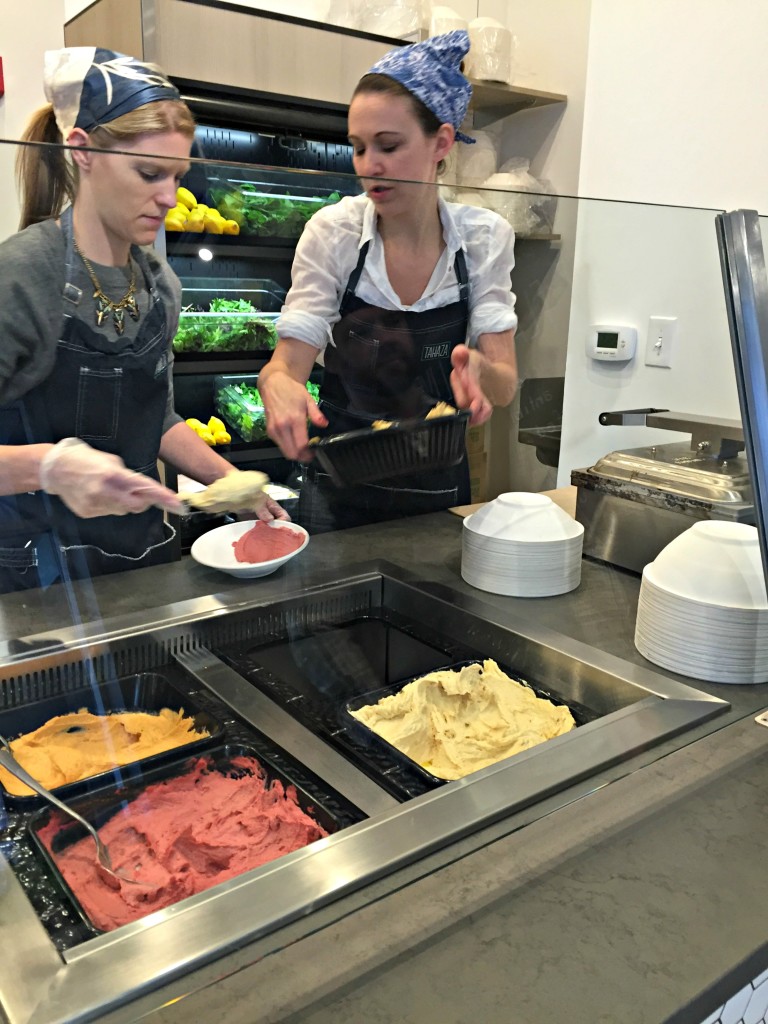 After adding hummus, the next step is to choose your protein contents. The options all looked so amazing and filling: all natural shredded chicken, slow cooked beef, lamb with chickpeas, medley of mushrooms, or baked falafel. I decided to go for the mushrooms and lamb. I feel like not many quick “grab and go” restaurants offer lamb, so this Greek was not about to pass that up! Tim decided to get the slow cooked beef. We also got a falafel on the side just to try it.

After picking your protein, you can basically load up your meal with as much goodness as you like from their selection of seasonal toppings and house-made sauces. 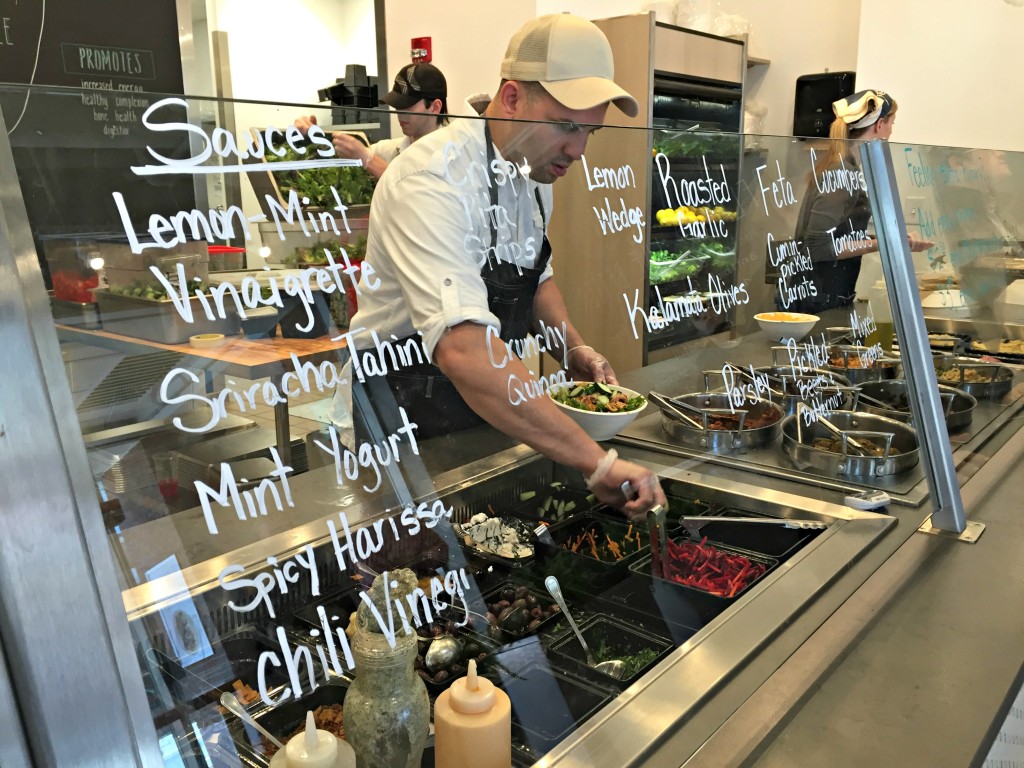 I loaded up my lamb and mushroom hummus bowl with cucumbers, tomatoes, the pickled beets and butternut (yes I went double beet – I am obsessed!), crunchy toasted quinoa, and the lemon mint vinaigrette. 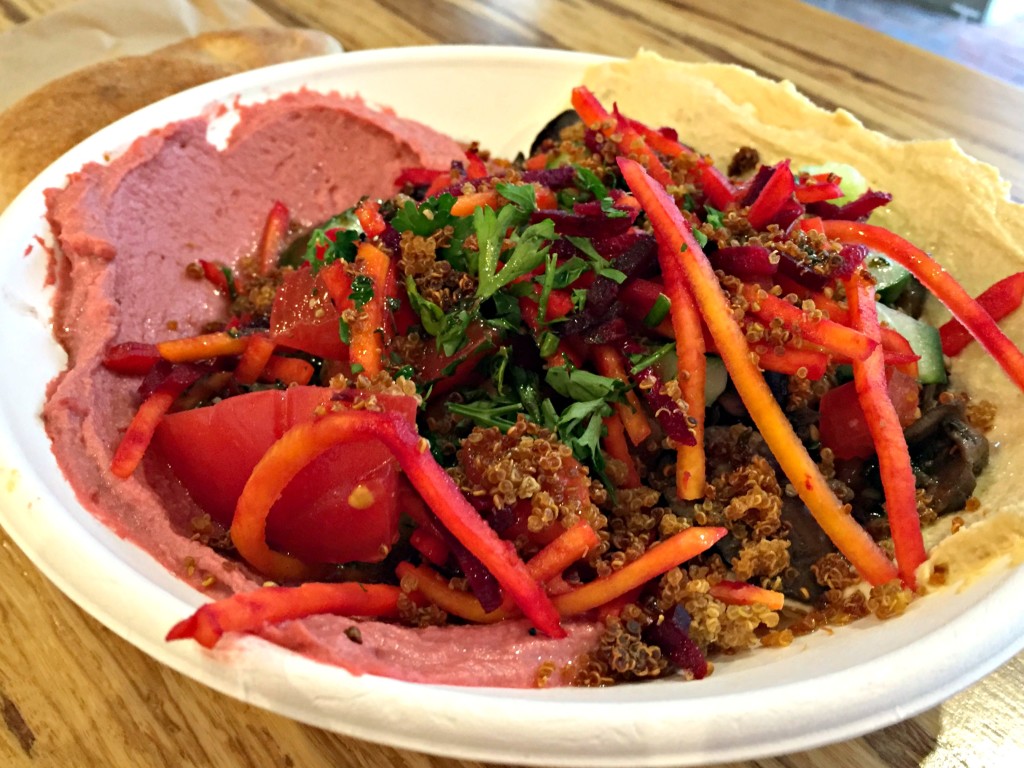 Tim chose to add cucumbers, tomatoes, the pickled beets and butternut, roasted garlic, and feta to his grain bowl. He also went with the sriracha tahini dressing, which Emily told us they are quickly becoming known for! 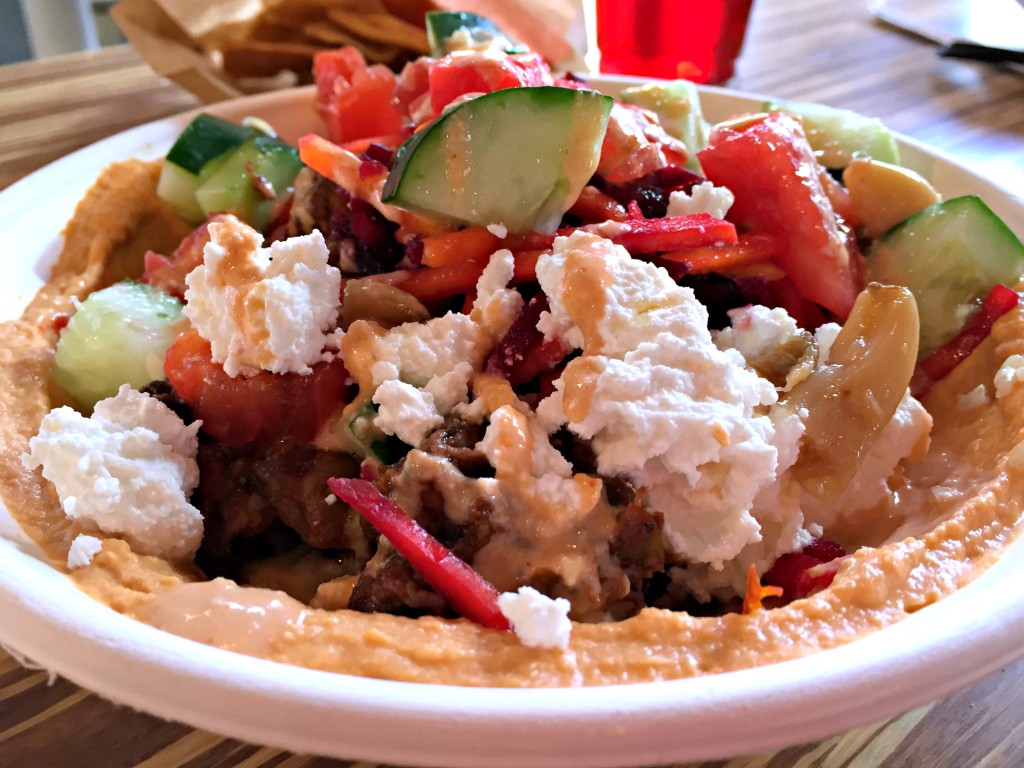 The grain in Tim’s grain bowl was a wild rice, currently the only grain offered if choosing this option. I have my fingers crossed for quinoa, farro, or other grains being added down the line. 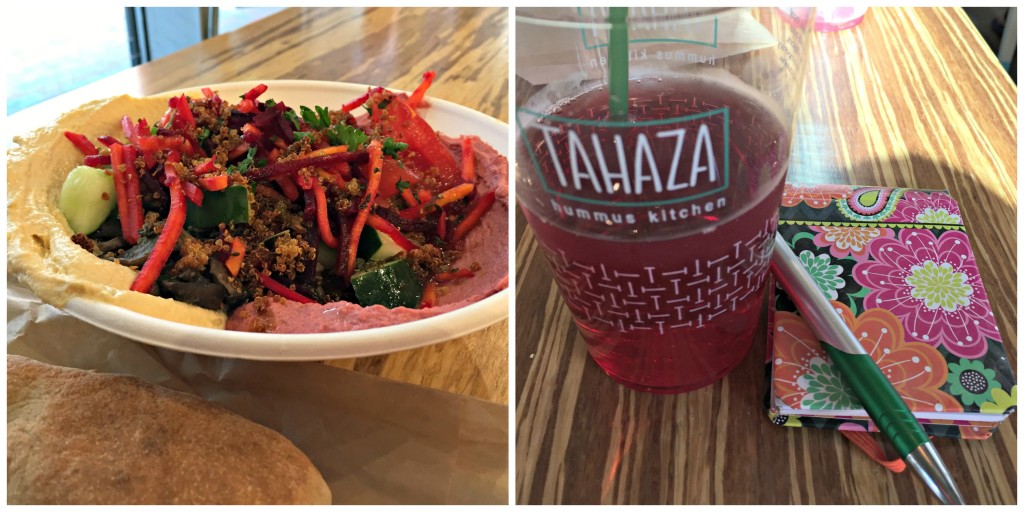 For drinks, Tim ordered the blackberry house made specialty soda, and I tried the blood orange hibiscus tea from MEM tea, a local Watertown company actually! Normally I’m not a big iced tea person, but I actually liked this tea a lot. It wasn’t overpowering at all. 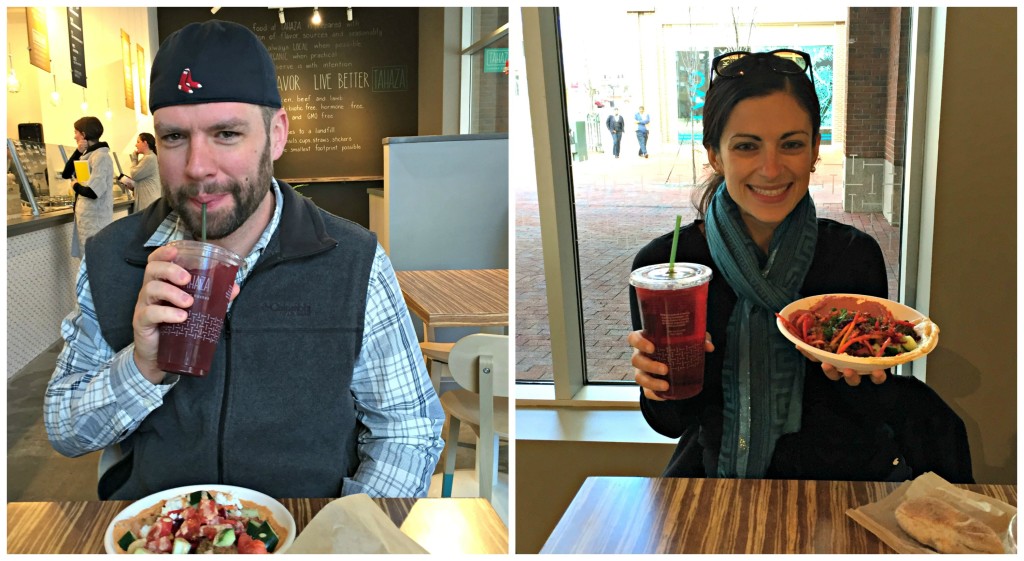 If I had to pick a couple of things that stuck out to me most about our meals at Tahaza, they would be: 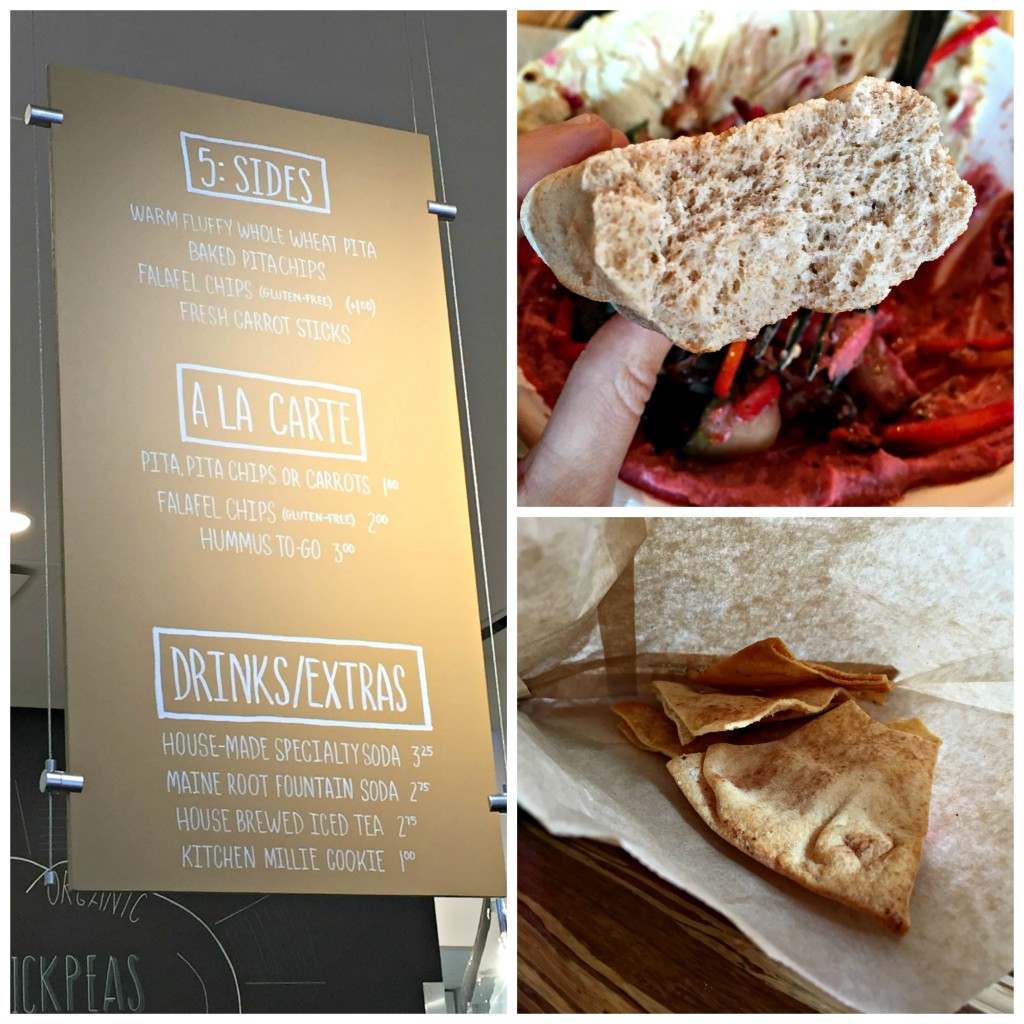 After visiting Tahaza, sampling their food, and chit chatting with Emily, it’s clear that Tahaza is a restaurant built out of passion and strong values. Tim and I quickly learned that Emily shares the same beliefs we do about food tasting better when it’s fresh and locally sourced, and Emily told us that all the food at Tahaza is sourced as locally as possible. The bread is delivered almost daily from Brooklyn, and the wraps come from a bakery in Worcester. They even have a hanging chalkboard that lists their local features. 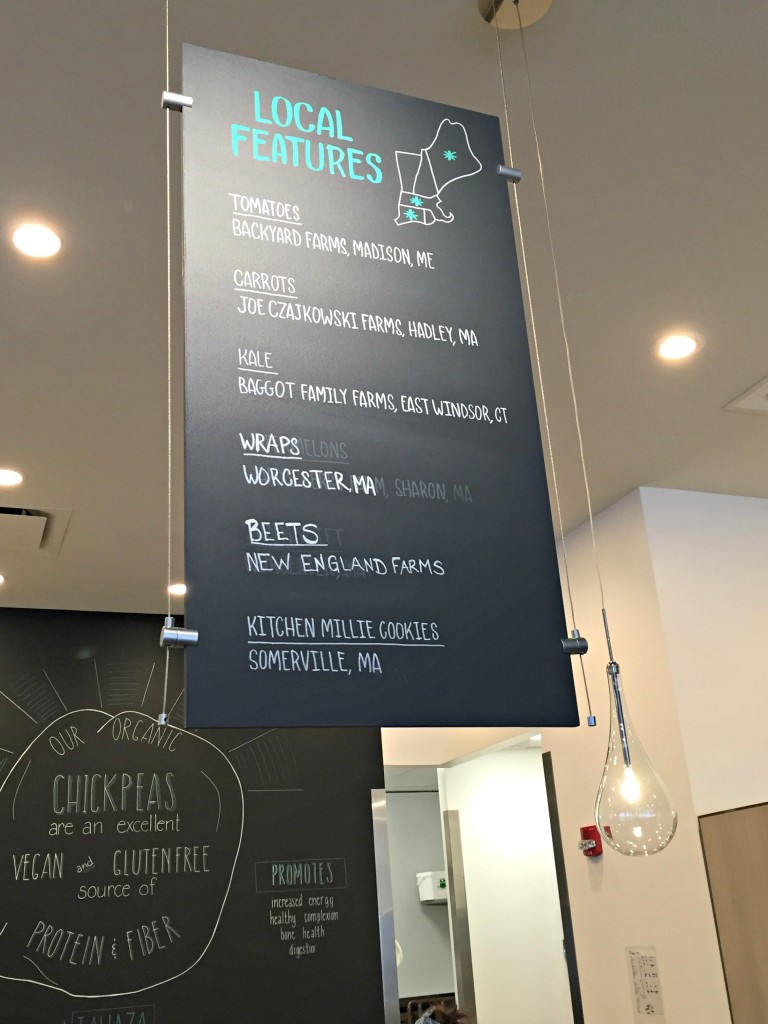 Along the same lines of providing the freshest food possible, Tahaza doesn’t have a freezer in the kitchen. This is almost unheard of in the restaurant world, especially for bread! Emily said that when she first opened Tahaza, everyone told her she was crazy to not have a freezer, but she feels so passionately about it that she wants to stick to her guns. Finally, everything at Tahaza is 100% compostable, even down to their straws and stickers. Like she believes in maintaining a high quality of food, Emily believes in leaving as little of a carbon footprint as possible. I really admire Emily for holding herself to these convictions and spreading the word about the importance of eating fresh and local.

Next time you’re in the Cambridge area, stop in to Tahaza and let me know what you think! Something tells me you won’t be disappointed.

Readers, let’s chat! What do you think of the concept of hummus being a staple in your meals instead of just a side or a snack? Have you been to Tahaza Hummus Kitchen yet? What do you think you would order off the menu?

For other F&F restaurant reviews, check out:

Disclaimer: Tim and I each received a complimentary meal at Tahaza Hummus Kitchen in exchange for this review. As always, all opinions are my own. Tahaza is located at One Canal Park in Cambridge.