A Party for Our Bridal Party

Last weekend, Tim and I hosted our bridesmaids and groomsmen at our apartment on Saturday night for a little party. 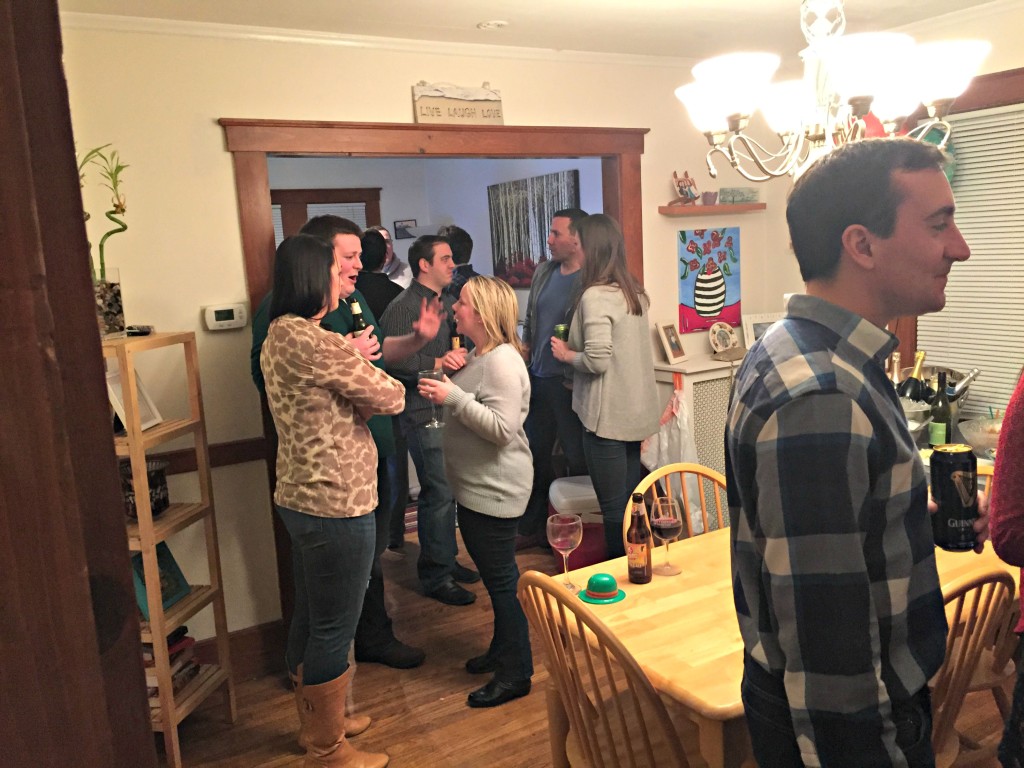 This is an idea we stole from Slesh and Will who did something similar last year. Basically, we just wanted all of our maids and men and their significant others to meet each other before all the wedding festivities begin. Now when dates have to take the shuttle with each other they will have already met, our bridesmaids will know the guys we pair them up with to walk into the reception, and it just makes everything a lot more comfortable. 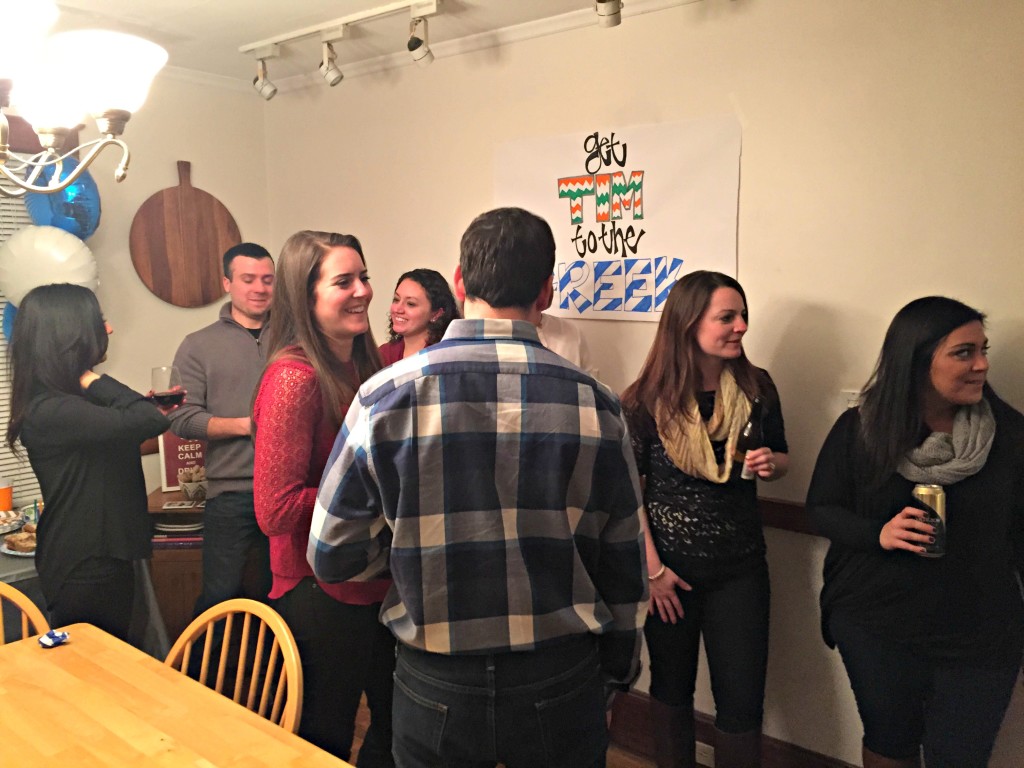 The day actually started with a fun bridesmaids brunch at Shannon‘s house. Shannon is my friend from both high school and college, and she has a blog called Dresses and Desserts. Shannon taught herself how to sew when we were young, and she now runs a little side business doing alterations and designs. Well, her side business is going to be busy for the next 7 months because she is making the bridesmaids’ dresses for our wedding! 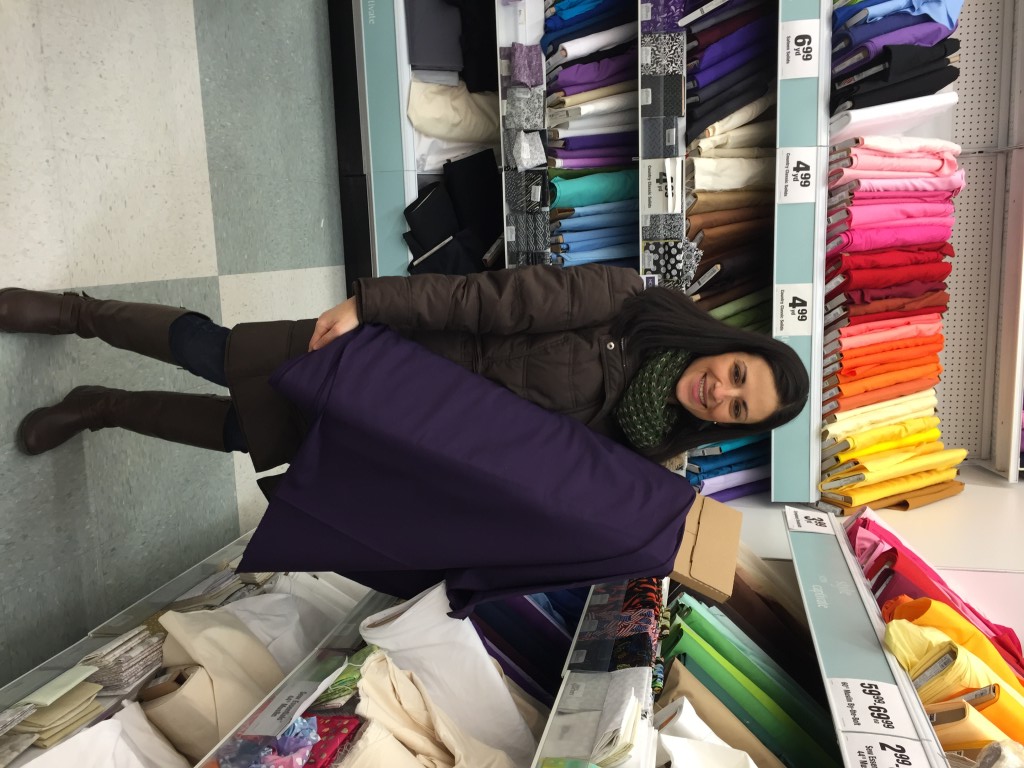 The fabric I chose! ^

Anyways, the girls each brought something over for a potluck style brunch, and we were laughing about the amount of food we ate BEFORE the girls had their measurements taken. 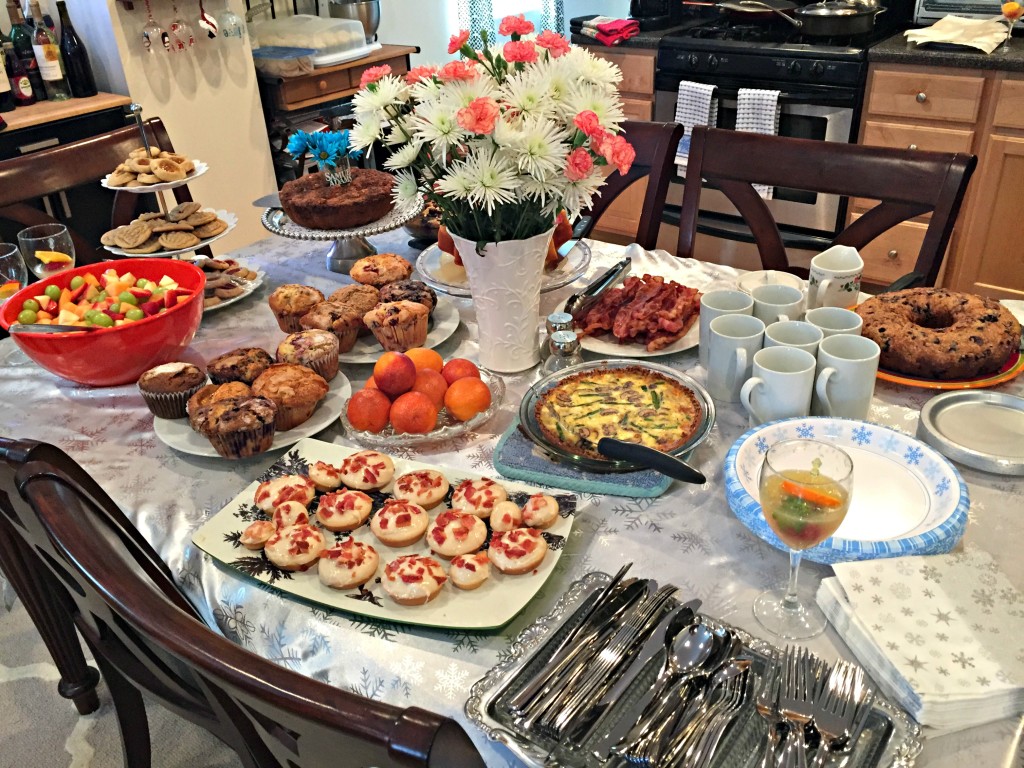 We had multiple coffee cakes, fruit salad, bacon, cookies, blood oranges, muffins, maple bacon bites, a quinoa crusted quiche with asparagus, and a tequila pomegranate booze cake. I brought my favorite French toast casserole (will post the recipe soon!), and of course we cheered with mimosas. Slesh even turned her coffee cake into a bundt cake like in My Big Fat Greek Wedding, except she used a classy Sam Adams glass as her vase. 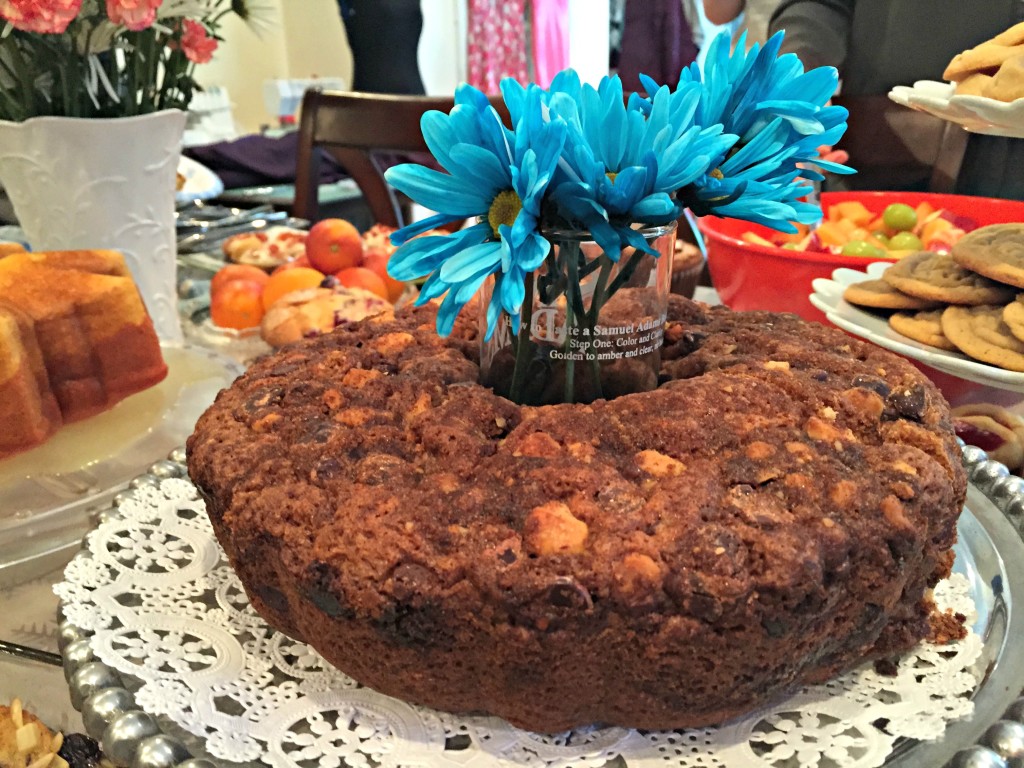 It was fun to spend the day with the girls just hanging out, laughing, and decided on dress styles for the wedding. After the brunch, everyone went their separate ways to get ready for the night, and Tim and I started getting all the food out, most of which we prepared the night before. On our menu to feed 27 people? Whole wheat spaghetti and roasted spaghetti squash, 50 of Tim’s half and half meatballs (half beef, half pork), 36 of my Southwestern vegetarian meatballs, eggplant parm casserole, Greek style green beans, and garlic bread. I made my flourless chickpea blondies for dessert, but Slesh reassured me earlier in the week that the girls would handle the rest of our apps and desserts. She wouldn’t really tell me anything more than that, so I assumed the ladies were up to something. They were! 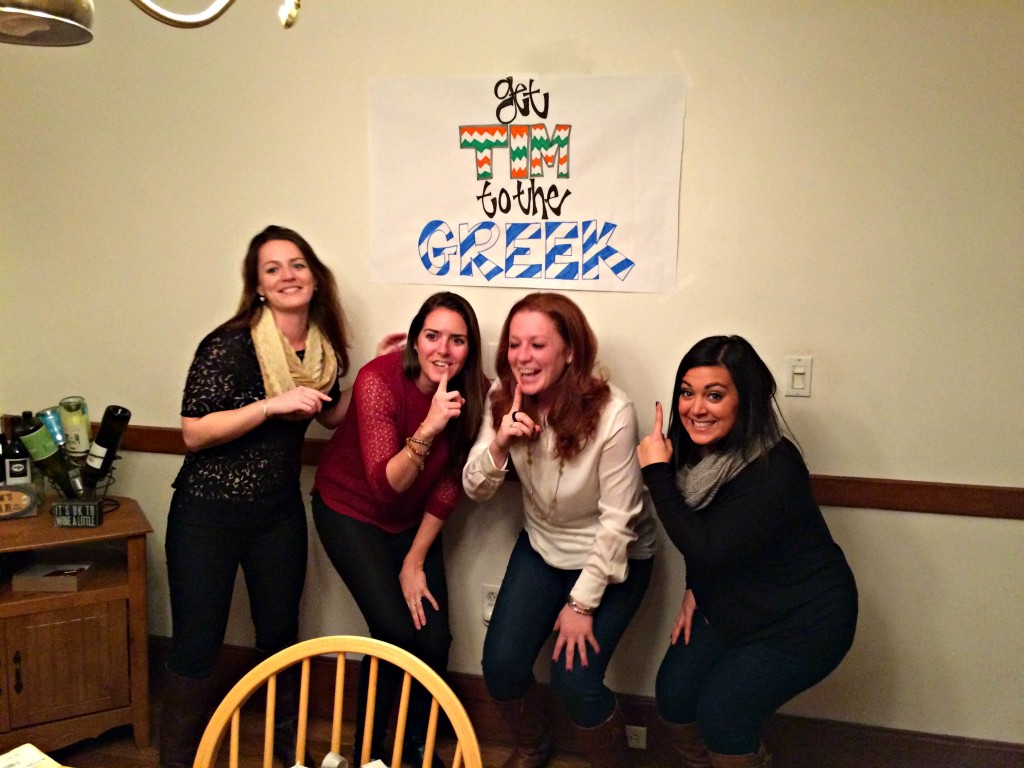 Enter… Get Tim to the Greek, the theme of the night and our new official wedding hashtag! If you’ve been following F&F for a while, you know how much I love themes… themed fitness classes, themed outfits, themed parties… the list goes on. My friends and I actually joke that there’s no such thing as over-theming! Anyways, the girls came in with their Get Tim to the Greek sign (a play on the movie Get Him to the Greek), along with all sorts of party props and thoughtful details for the night. 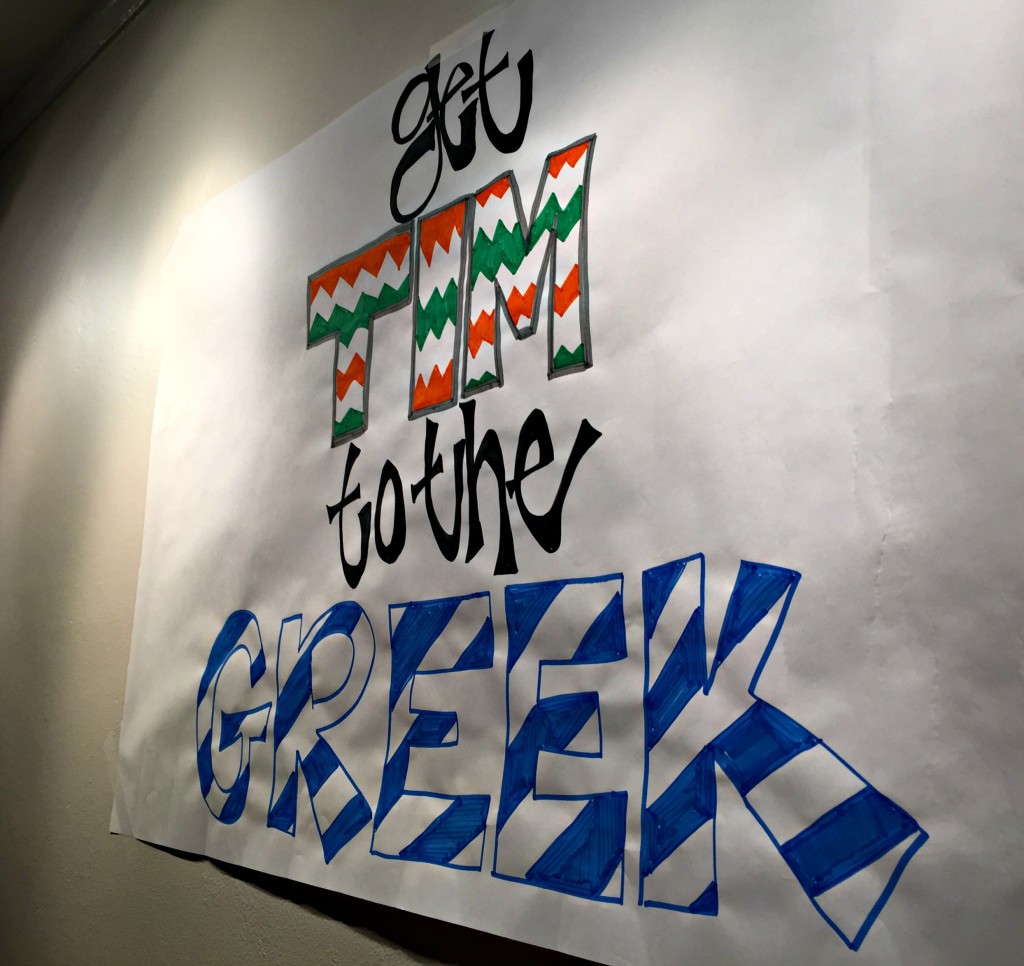 First, all the apps and desserts they brought were either Greek or Irish. There was tzatiki dip, feta bruschetta, baklava, Irish car bomb cupcakes, Irish coffee bars, and more. 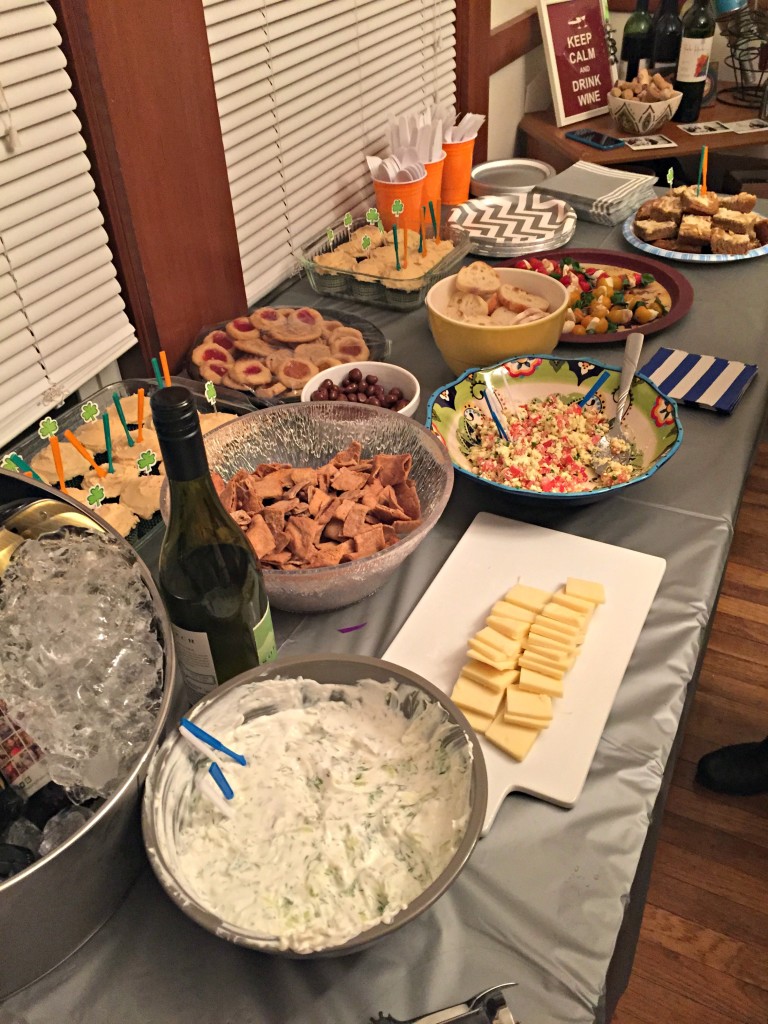 Next, they brought me a little Irish hat to wear and Tim a Greek one. It was really the only blue hat they could find at the store because apparently the party store doesn’t have a Greek aisle even though they have a whole St. Patrick’s Day section. Note the bottles of ouzo we are holding… yes, shots were taken later in the night! For the record, ouzo is disgusting. 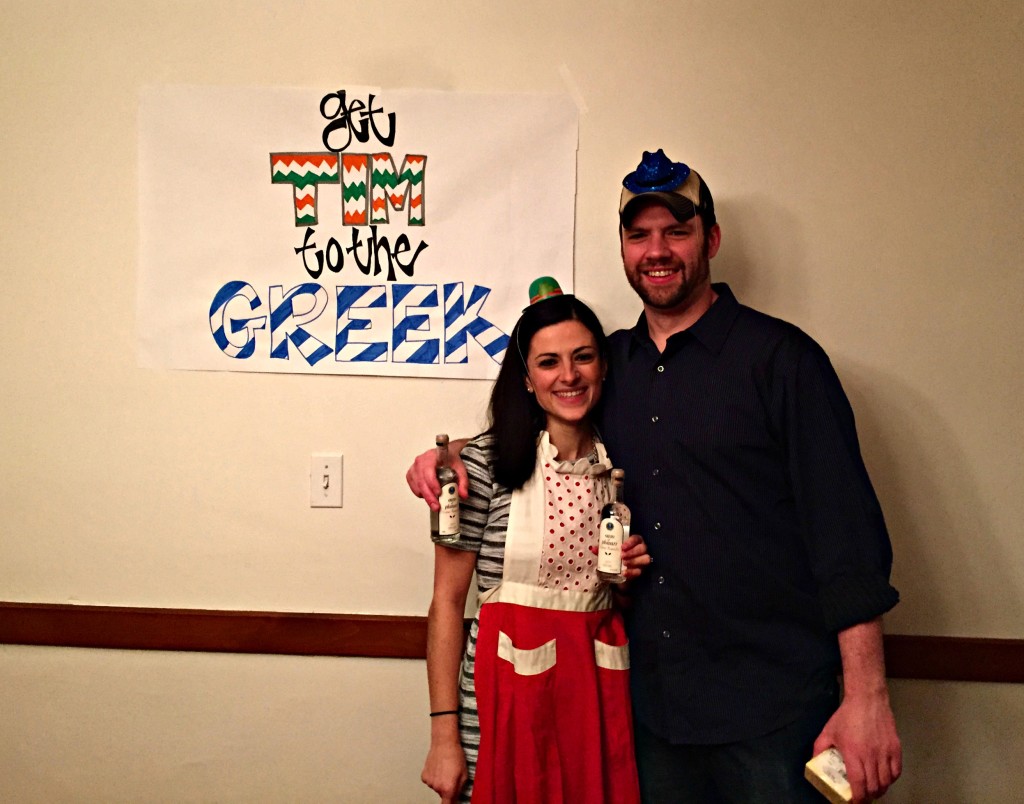 Tim’s sister also brought orange, green, and white balloons to hang on one side of our dining room and blue and white ones to hang on the other side. Here’s a fun picture of my cousin, brother, and me standing on the Greek side! 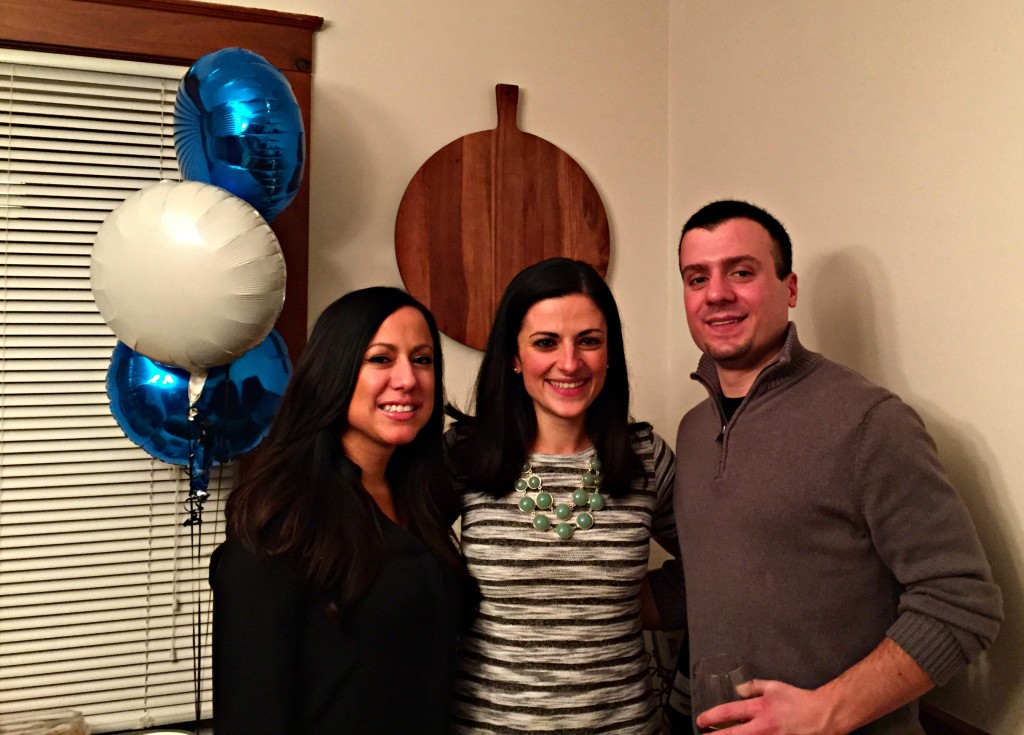 Another nice touch was the game that Slesh put together for us. I had to answer ten questions about myself and ten questions about Tim ahead of time, and Tim had to do the same. Then we were put on the spot in front of everyone to see how well we knew each other. Tim got a lot right about me, but I didn’t do as well! I am sticking to my answers though – I think I just know him better than he knows himself. Erica snapped some funny pictures during the game… you can see where I am saying “WHAT!” to Tim’s responses. 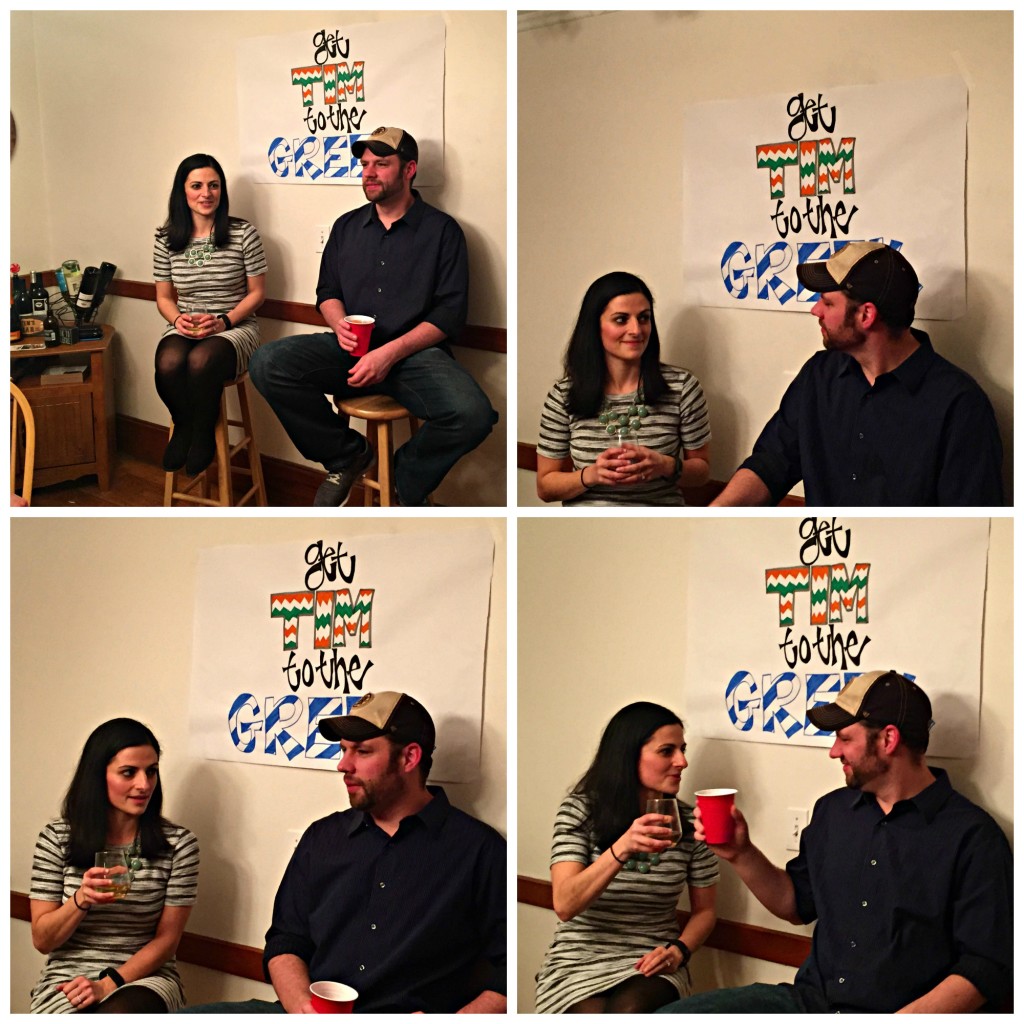 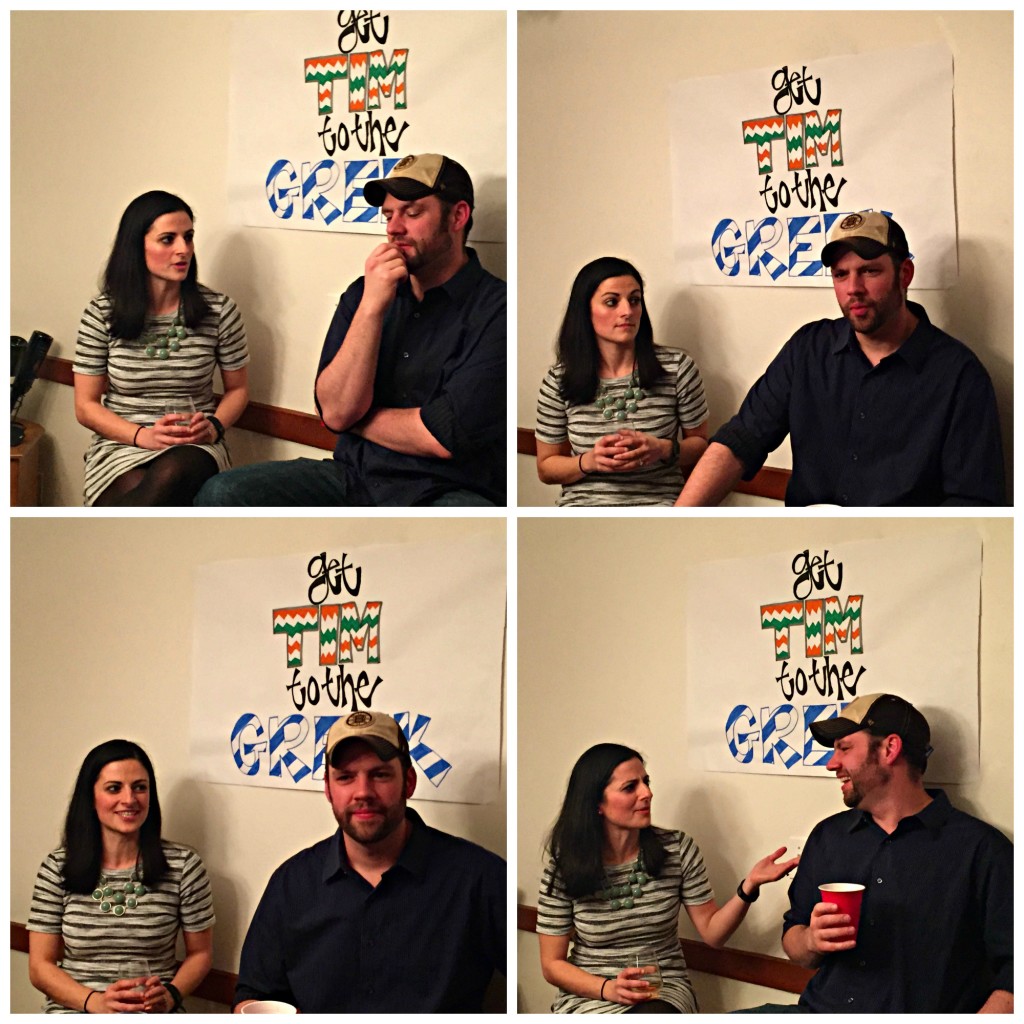 Here’s one of my favorite pics from the night:

And here’s a bunch more that I snapped: 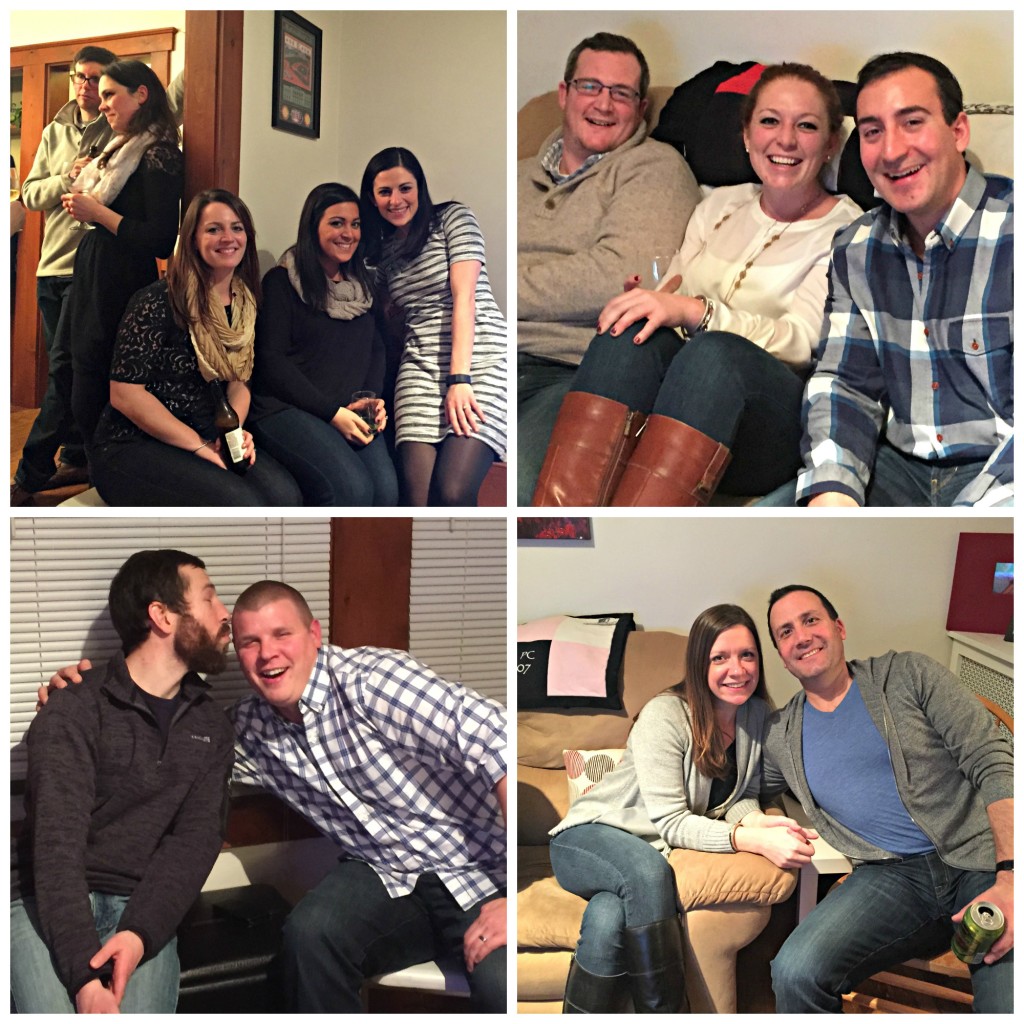 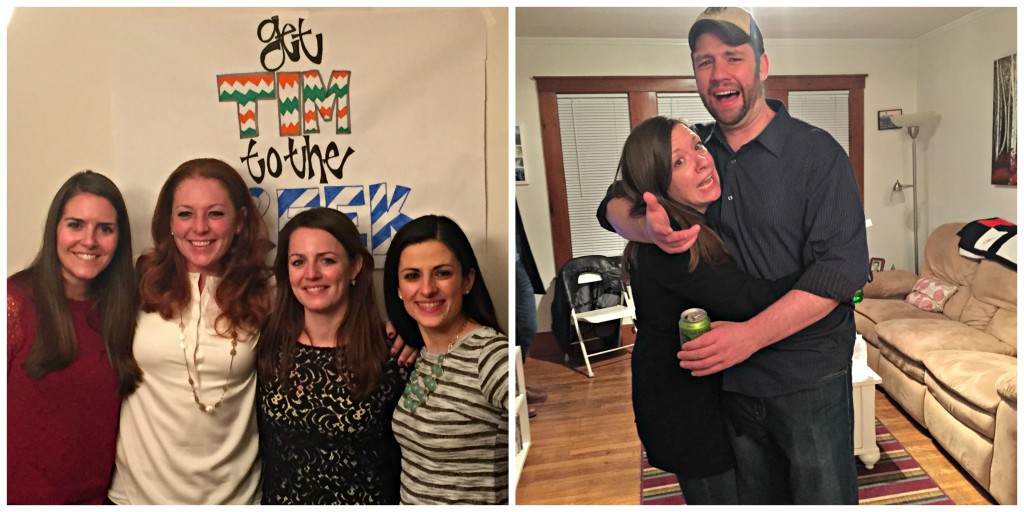 Here are the groomsmen, minus Tim’s 16 year old cousin Neil: 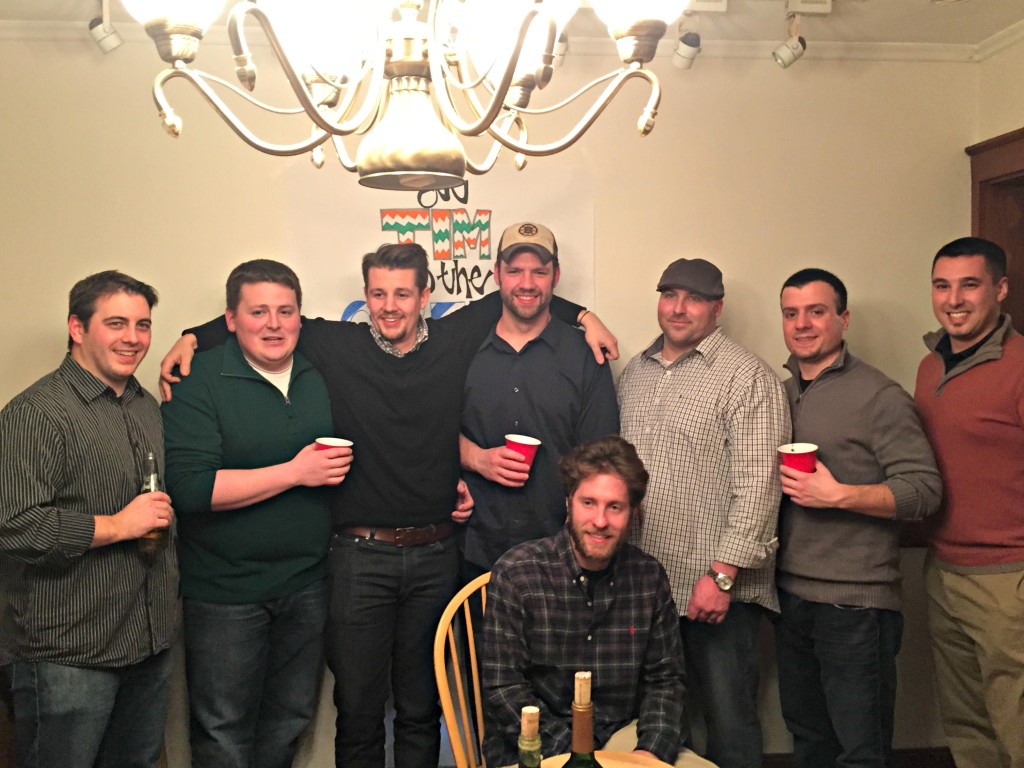 Here are my bridesmaids: 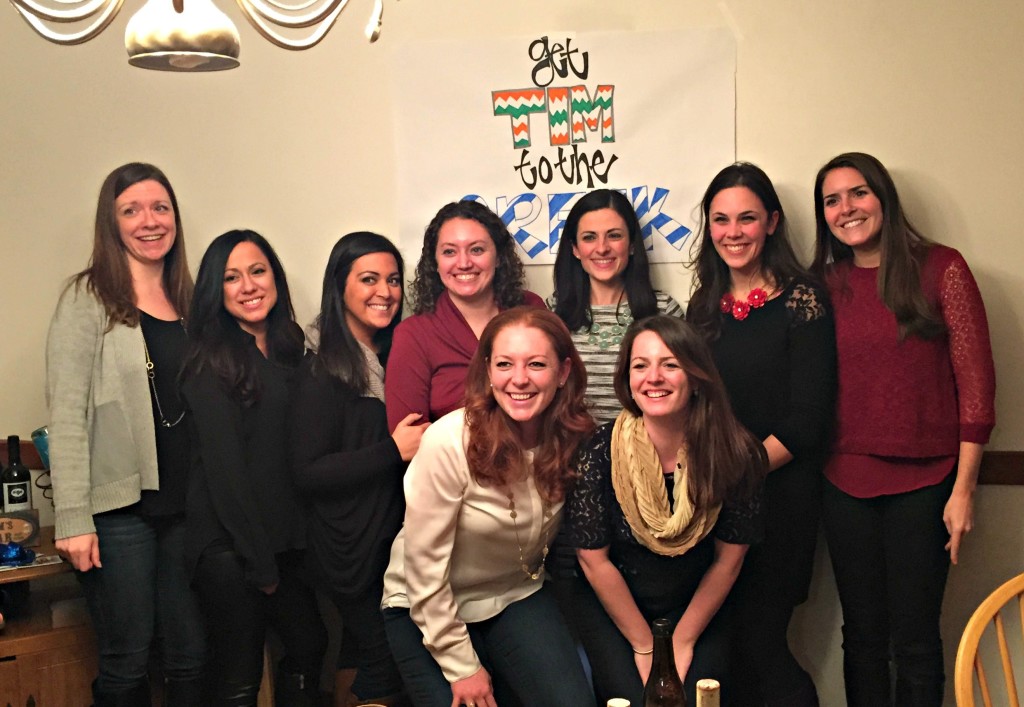 And here’s my other favorite picture from the night, the one where it looks like we are holding up a pair of floating jeans. 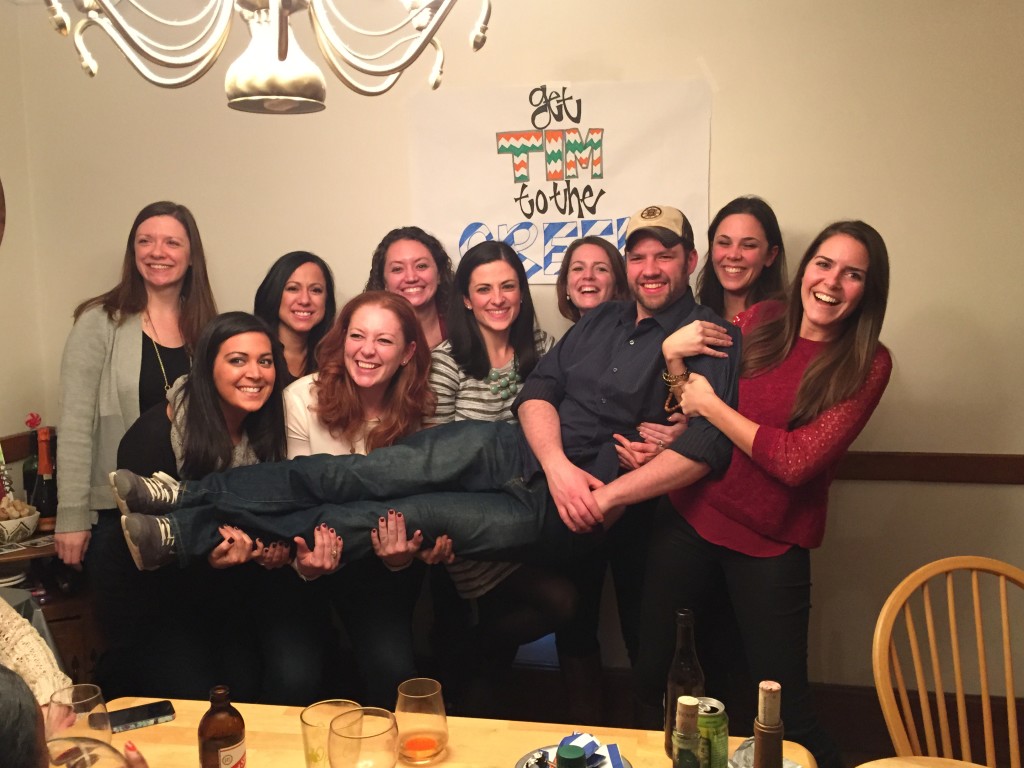 At the end of the night, the girls sent everyone home with a Mythos beer that had a snippet from an Irish poem attached to it. My friends really do think of everything! 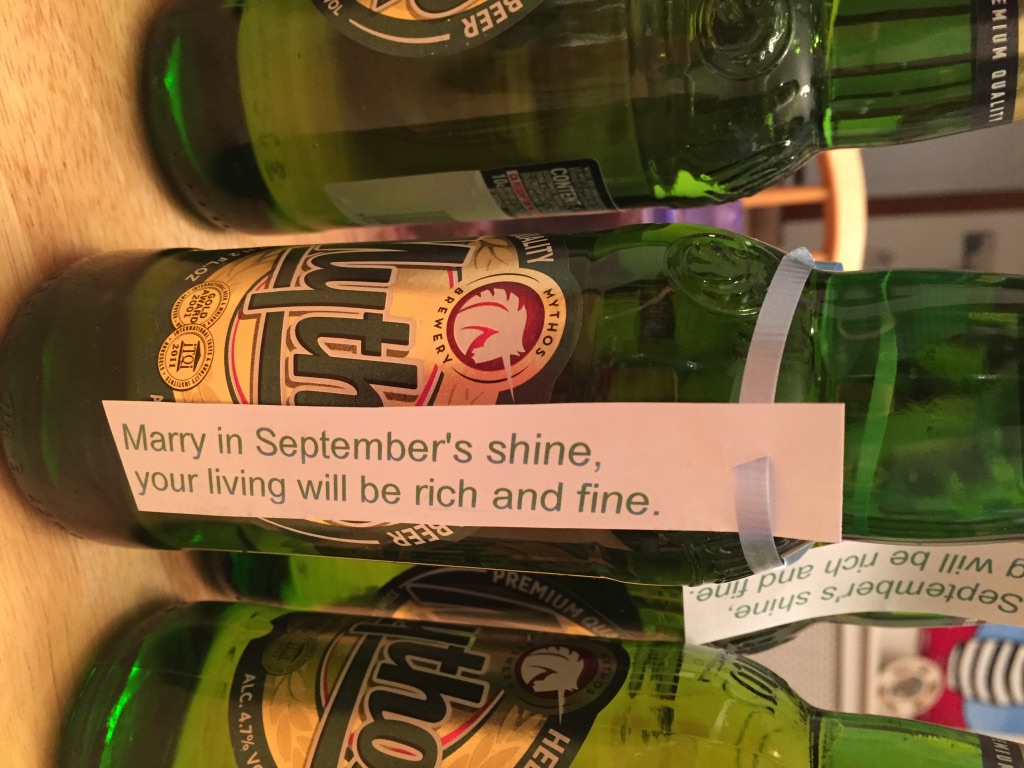 I had such a fun day and night with so many of our favorite people, and it made us so excited for our wedding day and festivities to come. I had a stressful week last week, and it didn’t even matter because I chose to instead concentrate on how grateful I am for the amazing friends and family we have in our lives. A big thank you to everyone who came to our party and made it special!

Readers, let’s chat! Have you ever been to a party for any bridal parties you’ve been a part of? What’s your favorite part of the #gettimtothegreek theme my friends came up with?

Hope you all have a great start to the week!