Last night was a really fun bootcamp class.  The class got competitive!!

I did a themed class of games and partner work.  I used a lot of the material I learned at an Exercise Etc workshop I attended a few months ago called “Bootcamp Games for Grown-Ups.”  Sounds silly, but it definitely made for a fun class.

I set up a huge square (four cones, one in each corner) to mark our “field” for the night.  We began with a warm-up that included jogging from one side of the field to the other, high knees down and back, butt kicks down and back, repeating those three again, a lower body stretch, repeating the jog/high knees/butt kick combo again, and finishing with a lower body stretch.

The first drill we did was called “The Square of Despair.”  I had the class sprint the first side of the square/field, then jog the remaining three.  Then sprint two sides, jog two.  Sprint three, jog one.  And then finish with four sides of sprinting.  I had the winner (Chris) pick a move that the rest of the class had to do for 30 seconds.  He chose jumping jacks.

We then did our first partner exercise.  This was one called “The Annoying Partner Drill.”  Partners stand balancing on one foot and just tap their partners, pushing lightly on their arms, shoulders, legs, etc.  This works your core because you really need to engage your abs when trying to keep your balance.  We did this for one minute, then switched legs to balance on the other one.  To no fail, anytime I do this exercise everyone gives me looks like “What?  Really Athena?”  But by the end everyone is always laughing.

After “The Annoying Partner Drill” we repeated “The Square of Despair.”  This time we started with three sides of sprinting and one jogging.  Then two sides sprinting, one jogging.  One side sprinting, three sides jogging.  And finished with four just jogging.  Chris won this again, but Tim came in second place so I had him pick the next move to give someone else a chance.  He chose butt kicks, which I thought was really mean after so much running, but he only did it because he knows Geoff hates them!  Sorry, Geoff.

Then it was back to partner work for Partner Pushups.  For these, each partner gets in a pushup position facing each other.  Between pushups (at the top of the pushup), they high five each other.  I had them do 10 (one rep being pushup, clap right hand, pushup, clap left hand).  So it was really more like 20.  I’m so tricky.

Next group game was Freeze Tag!  Tim volunteered to be “It” and then everyone ran around within the square/field, trying not to get tagged.  I told them if they stopped moving or went out of the designated area, then they had to do burpees until the game was over.  That was a mean threat apparently because not one person had to do them!  If someone got tagged, they had to go down to the ground and hold a plank.  Only way they could be untagged was if another class member jumped over them.

Then we repeated one more set of Partner Pushups, and one more round of Freeze Tag.  For the second Freeze Tag game, Geoff volunteered to be “It.”  This time if you got tagged, you had to do plie squats until someone did a two hand tag on your back. 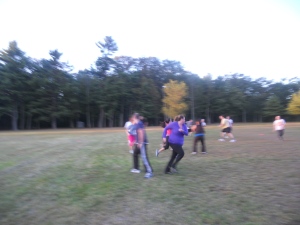 Next partner drill was Wall Sits.  Partners stand back to back and lower down until both are in a squat.  We held the squat stance for a minute.  This one is tough because if you get off balance, so does your partner!  We repeated this one twice in a row.

Then it was Relay time!  For the relay, partners did wheelbarrows from one side of the field to the other (one partner walks on their hands across the field while the other holds their feet and runs behind them).  At the end, the partners did 10 bicep curls together.  Then crab walked back to the beginning.  Then each set of partners repeated the exercise, switching roles in the wheelbarrow, repeating the 10 bicep curls, then bear walking back to the beginning.

Next partner drill:  Tricep pulls.  I think the least popular move of the night.  Partners stand across from each other and hold hands (right hand to right hand).  At the same time they lean back.  Then one at a time they pull the other one in, keeping the elbow back, to use the partner’s body weight as resistance for the tricep pull.  Then switch arms and repeat holding the left hands.

Then we really went back to our childhood and played Duck, Duck, Goose.  Everyone stood in a circle doing squats (I did this last session with planks).  I started the game with the usual “duck, duck, duck” and so forth.  On the goose, you sprint around the circle until you get back to your spot.  We repeated until (almost) everyone got picked to be the goose.  This is my favorite part of games class because when Katrina gets selected she literally screams the entire time she runs around the circle.  So funny.

Almost done!  Last cardio combo was a Shuttle Run game.  So I added some more cones to my square and had everyone jog to the first cone, touch the ground, and sprint back to the beginning.  Then jog to the second, touch the ground, sprint back, and so forth.  The first person to complete a full shuttle got to pick a move for everyone to do for 30 seconds in between football runs.  Lindsay was the first and chose a plank, then squat pulses.  Then we did round 2 of the shuttle race, and Bridget won so she picked jump squats and jumping jacks.  Last set Chet won and he chose speed skates and another plank.

Finally we finished with Ab work.  First the partners lied on the ground with the bottoms of their feet touching each other.  We did 10 single crunches, 10 pulses, 10 single crunches, 10 pulses.  Then everyone put their feet flat on the ground, and the next set was a full crunch where partners gave each other a high five (opposite hands touching) at the top of each sit-up.  That one was more targeted for obliques.  Next I had everyone get in a reverse bridge and clap opposite hands to each other, ten times.  We repeated that reverse bridge, but then with opposite feet.  For the last move of the night, one partner lied on the ground, holding the other partner’s ankles.  Then the standing partner pushed the lying down partner’s feet/legs down either straight, the left, or to the right for one minute.  Then repeated for the other partner.

I think everyone had fun with the games, but this class was definitely more running intensive than usual!  We dont’ have class this Thursday (I’m off to DC for a long weekend) so I figured it would be a good week for it.

Question of the Day:  Have you ever taken or taught a class where you played games or did partner work as exercise?  I would love some new ideas!