Continuing with my Colorado recap posts!  If you missed the first, click over to this post to read about our day on Pearl Street.

Friday after we spent the day on Pearl Street, we headed back to the hotel to relax for a bit, then got ready for a night at Boulder Brewing Company.  This was one of our must do’s during the trip, we’ve had their beers before at the Boston Beer Summit and really like them!

Bonus:  The brewery was a three-minute walk from our hotel.  #forthewin 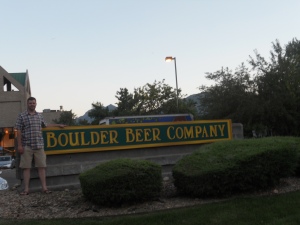 They had a great outdoor patio, again with a view of the mountains in the distance.  Colorado is so weird because some parts are SO flat, but you can always see crazy mountains somewhere far off.  Or not so far off as you’ll see in Recap Part 3 and 4!

We spent a while trying to decide what beers to get. 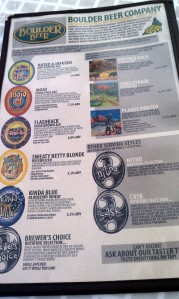 The solution when you can’t decide?  Get all of them!

So good if you can get your hands on them!
After some beer sipping, we got hungry and studied the food menu instead. 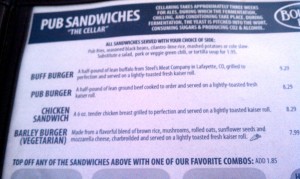 I was craving something burger-ish, so I went with the Barley Vegetarian Burger which was “made from a  flavorful blend of brown rice, mushrooms, rolled oats, sunflower seeds and mozzarella cheese, charbroiled and served on a lightly toasted fresh kaiser roll.”

I ate this as an open face burger topped with sautéed mushrooms and onions with only half the bun, and substituted a side salad instead of french fries.  So good.

At the end of the night, we went inside where Tim bought a t-shirt, and I snapped some photos of the brewery. 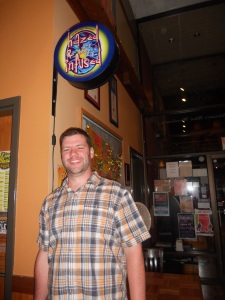 We also bought a 6 pack of the Golden Ale on the way out to enjoy by the outdoor fire pit at our hotel — that’s where we spent the rest of the night relaxing!  After taking this pic of Tim in front of the Get Hazed truck of course — that’s his favorite BBC beer!

Off to teach Core Strength and work a floor shift at the Y!  Enjoy the night.