Yesterday was a million BAJILLION times better than Monday was. Thank you for putting up with my little rant, and thank you for those of you who left me happy comments.

Last night I went to Kickboxing (thanks to someone accidentally signing up three times I was able to get in, phew!) and loved Liz’s playlist, then taught my circuit class. I had two new boys there, which is always exciting to me, but then I always feel the need to make class extra hard so the fellas don’t think it’s just any lame old wimpy aerobics class.

The circuit workout was VERY similar to this one that I taught during a Thursday morning a couple of weeks ago, but I swapped out a few moves. The upper body cardio sections included jumping jacks, lateral ski jumps, single leg jump rope, and lateral lunge punches instead of the cardio you see listed there. The strength moves were the same. For the lower body pyramid work, we tried using weights this time, but it may have been a bit much. I swapped ab toe touches for standing toe touches, and instead of the wall sit we did surrender squats which got me a LOT of mean looks. Abs were all improvised on the spot.

Playlist was 90’s jams, but I skipped through Ricky Martin and Spice Girls so the boys wouldn’t walk out.

Dinner last night was roast beef. Tim really wanted to make one, which is so random right? I kept calling it a roast beast, and Tim kept calling me Dr. Seuss. On the side was mashed cauliflower in lieu of mashed potatoes and cooked carrots for another veggie. Tim always has dinner ready and waiting for me after Two a Day Tuesday. Score!  🙂

Speaking of Tim’s culinary skills, he made this easy and quick appetizer recipe to bring along to my goddaughter’s third birthday party a couple of weeks ago. It’s not too bad for you if you use plain Greek yogurt instead of sour cream. And of course if you limit the chips you are dipping!

This dish was gone pretty fast, so I think the fam enjoyed it. Thanks, Tim!

Layer the ingredients in a bowl in the following order: salsa, bean dip, yogurt, guacamole. Top with shredded cheese and the 2 diced tomatoes. 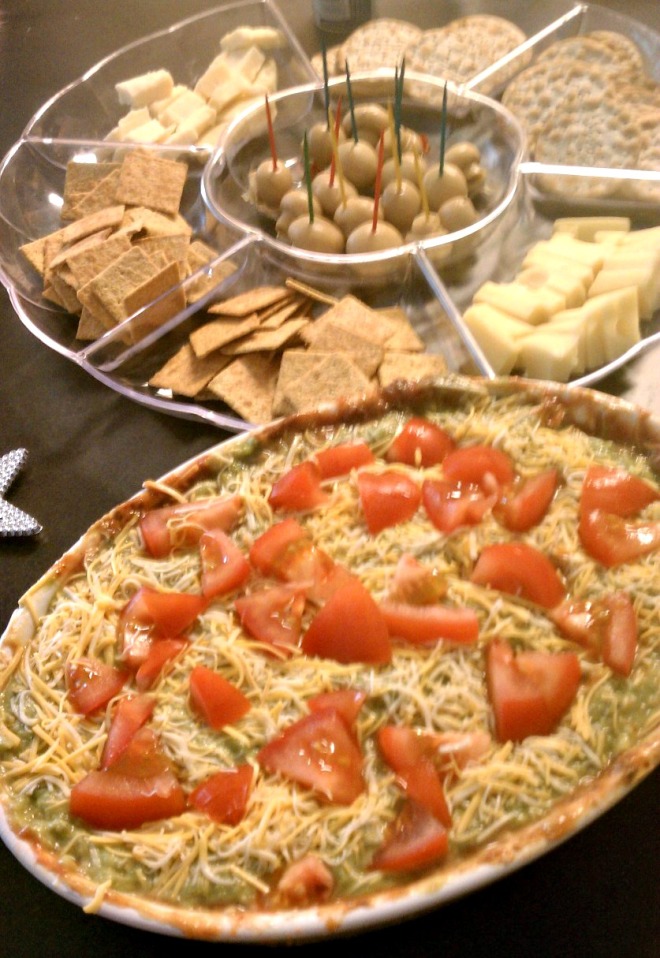 Lots to do today since I decided to play hooky from productivity after classes last night. I’m just too addicted to Chopped!