The following post is sponsored by FitFluential LLC. All opinions are my own.

A few weeks ago, during one of my massive Sunday food prep sessions, I had the urge to make apple crisp. Apple crisp is totally one of those perfect fall desserts that you just HAVE to make at least once a year, right? I definitely think so, but despite being made with fruit, it’s really not so great for you. Every time I’ve tried to healthify apple crisp in the past, I still ended up using butter, white flour, or granulated sugar to some extent. Either that, or I ended up with a massive kitchen fail. My desire to create the perfect lightened up apple crisp recipe came at a great time, because I was recently asked to develop a recipe using Canadian maple syrup through my relationship with FitFluential.

This was perfect because one of my favorite ways to sweeten a recipe without using any added sugar is with real maple syrup. It’s pure, all natural, and something we pretty much always have in stock in our kitchen — and for more than just topping pancakes or waffles with. In the past couple of weeks, aside from this apple crisp recipe, Tim and I used Canadian maple syrup in recipes like quinoa stuffed acorn squash, crockpot pumpkin oatmeal, and mashed sweet potatoes (made with only the syrup and plain Greek yogurt!). And on our meal plan later this week? Maple dijon chicken drumsticks. It’s a very versatile ingredient, and it really adds a lot of depth/complexity to our cooking.

Keep in mind that a recipe is not necessarily sugar free just because it doesn’t call for any added white or brown sugar. For example, maple syrup is still a source of sugar because it’s made directly from the sap of sugar maple trees (the sap is boiled down 40 times to make the syrup). It’s just a better choice in my opinion because it’s unprocessed and offers health benefits of vitamin and mineral content without losing its sweet taste. Think zinc and magnesium (necessary minerals for post workout recovery!), potassium, and 54 different antioxidant compounds (the darker the grade, the higher the antioxidant levels).

Anyways, back to the apple crisp. After poking around a little bit online, I think I was able to combine a bunch of different ideas to create a winning recipe for you guys. 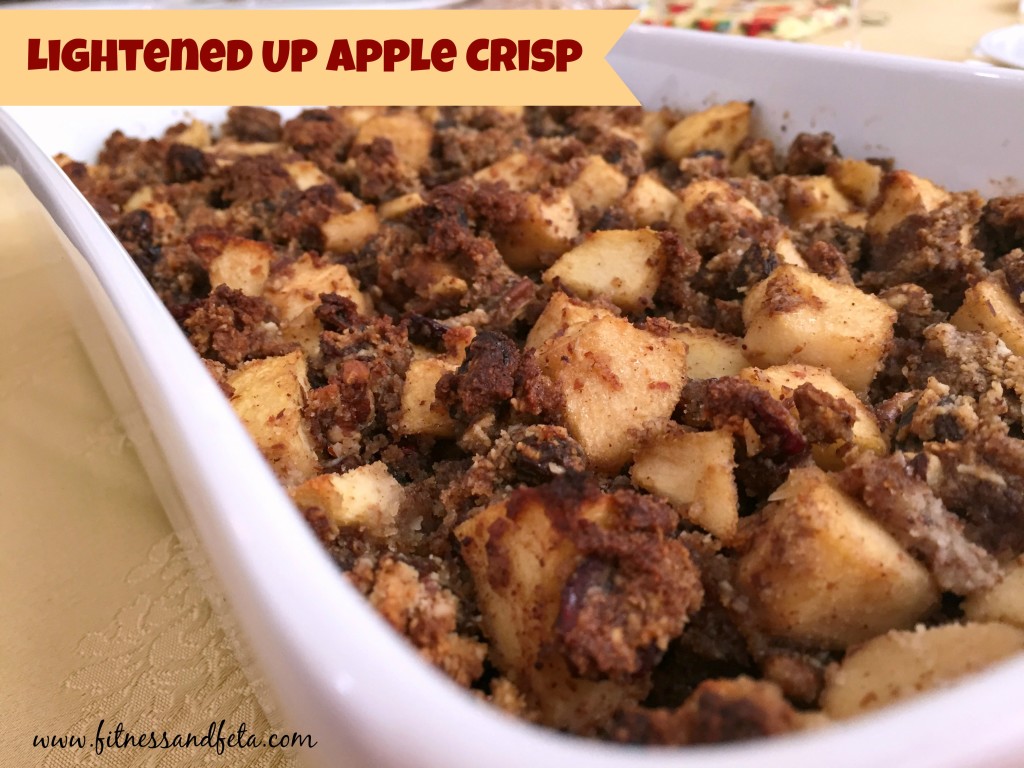 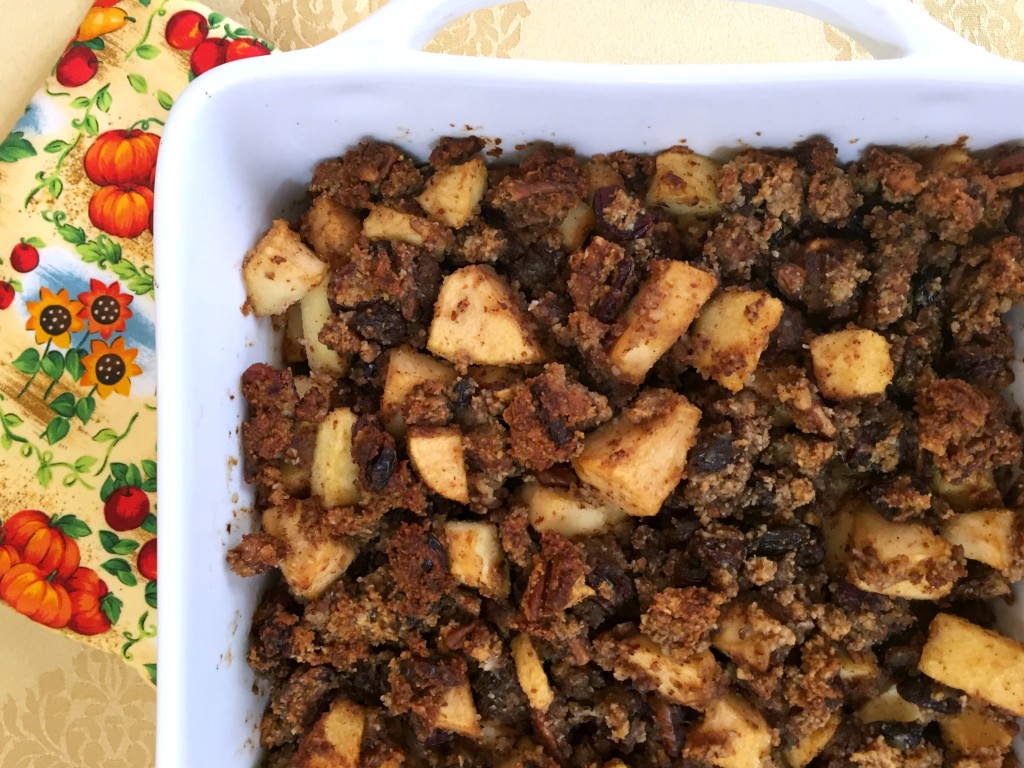 This apple crisp, despite not having the typical bad-for-you ingredients, still had an ooey gooey middle and tasted like the traditional version. The only thing I would say is that its not AS crispy as its non-healthified cousin. After Tim and I finished all our food prep that Sunday, we each enjoyed some of the apple crisp with a scoop of So Delicious almond milk frozen dessert. It definitely satisfied my sweet tooth craving, without the guilt! 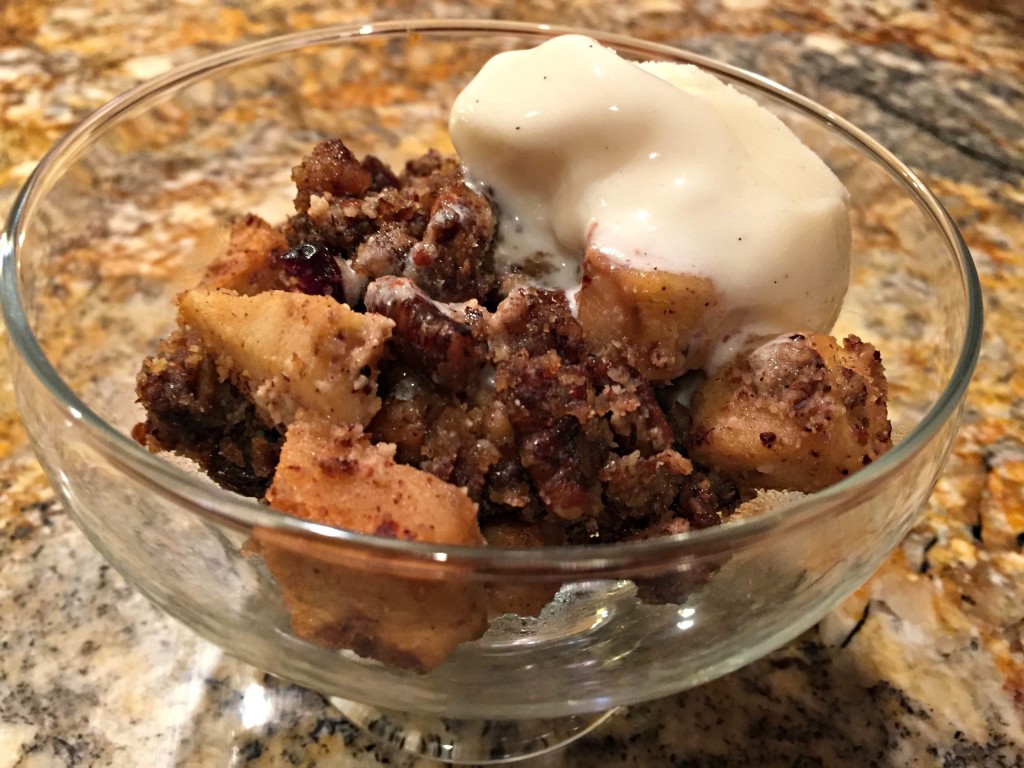 You can make this recipe for a smaller group by cutting the ingredients in half and using an 8×8 baking dish instead. Just cook for 30 minutes instead of going over. As long as the pans are the same depth, you should be okay. I’ve made both versions now, and each came out great.

–Let’s chat–
How do you make apple crisp? What’s your favorite go to fall dessert? How do you like to sweeten recipes without using any added sugar? What’s something you think you would like to make using Canadian maple syrup?

Next on my maple “to try” list is maple water! As someone who simply cannot jump on the coconut water bandwagon, I have high hopes for this one.