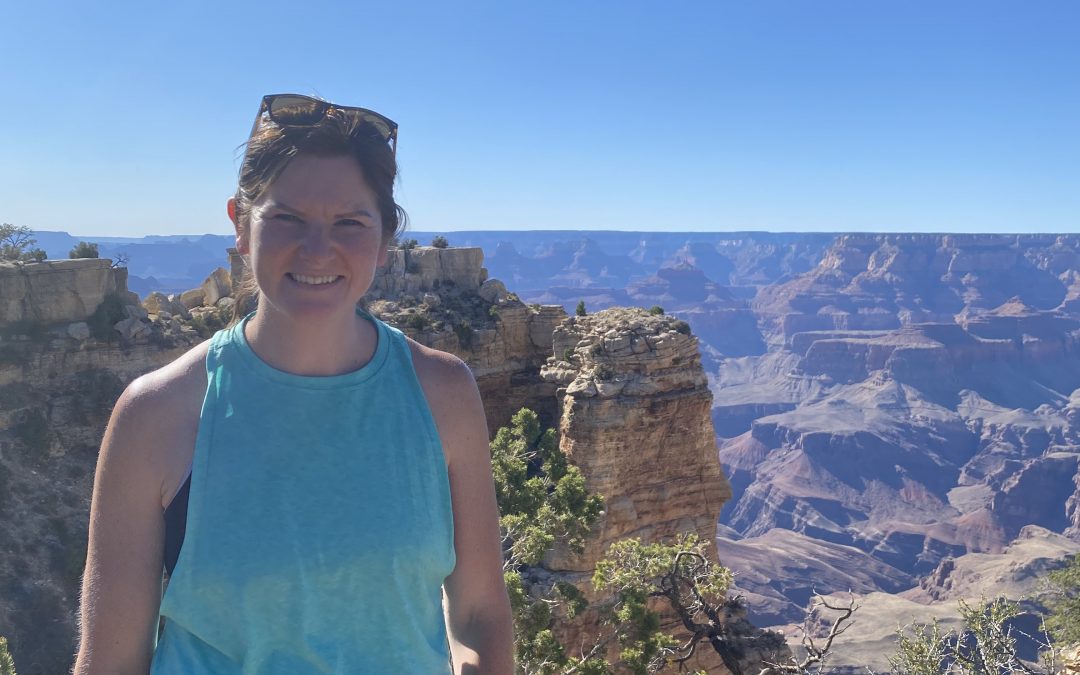 This year, I’m excited to share a monthly series spotlighting some of my amazing clients and Achieve with Athena ambassadors! If you missed the previous months, you can find them here:

This month, meet Liz! When we started working together, Liz had some deeply ingrained diet culture ideas around food and exercise, and as you’ll see, our work together helped her to work through some of that anxiety and develop a much healthier relationship with food and movement!

*Responses have been slightly edited for clarity.

How long have you been working with Athena?

I’ve worked with Athena for about a year and a half.

What did your fitness and nutrition look like before working with her?

Before working with Athena, I had a terrible relationship with food and exercise. I thought it was necessary to work out six times a week and I viewed my workout as a way to “earn” food or to “burn it off.” I viewed certain foods as good, and others as bad. I was constantly saying to myself “I need to get back on track” after most weekends/vacations/anything out of the ordinary. I also didn’t feel like I had control over my food choices in certain situations and didn’t trust myself with certain foods in the house. I had food anxiety before going to parties – what would I be able to eat? Would I feel out of control and eat way too much?

What are some of the most impactful changes you’ve made over the years? Have these changes helped the way you show up outside of the gym too?

Since working with Athena I haven’t said the phrase “I need to get back on track” and that is so freeing! I no longer see food as “good” or “bad” – instead, I see fats, carbs, and protein. I don’t get the “food Sunday scaries” and think I need to eat everything Sunday night because it’s my last chance before the week starts. I look at how to add things to my diet (add more protein and veggies, include carbs and fat at each meal) and no longer focus on what I need to take away. Since I’m adding more fat and carbs to my meals they are more filling and I snack so much less!!! I can now go to parties/holiday gatherings without the anxiety and know I won’t leave feeling overstuffed and uncomfortable- no unbuttoning my pants after Thanksgiving anymore!

Athena helped me understand that the goal isn’t to never emotionally eat again (which was actually really comforting to hear) but to have other items in my toolbox to go to in those situations and not have food as my default comfort strategy.

When it comes to fitness, I work out 4-5 times a week now and know that is enough – my body needs more than one rest day! I’ve also prioritized walking, instead of thinking that I “should be” running or that walking is “useless.” Doing an unassisted pull up has always been on my bucket list and with her encouragement I decided to actually make this a goal I worked towards and completed! Athena has helped me realize I can do hard things both in and out of the gym.

“Athena has helped me realize I can do hard things both in and out of the gym.”

What advice would you give to someone who feels hesitant about working with a fitness coach?

If you have been doing the same thing for years without progress and feel like you’re on a hamster wheel, coaching is worth the money! This investment doesn’t last for the few months you work with her, it lasts a lifetime and can be life-changing, just like it was and continues to be for me. We hire people to do things we don’t have the skills/mental bandwidth for – hair stylists, tutors, plumbers, house cleaners, landscapers, etc. – so why should your health and fitness journey be any different? If you are stuck in a rut, Athena’s knowledge and skills can help you move out of that and learn new skills that will last a lifetime.

If you could only do one strength move for the rest of your life, which would you pick?

A pull up because it makes me feel like a badass and strong AF.

What are you excited to continue focusing on in your journey?

Believing in and trusting in myself more. Cultivating more confidence has always been one of my top reasons for working with Athena. I am excited to continue working on that piece and truly believing in my own capabilities, both as it relates to food and fitness and other areas of my life too.

You can make powerful changes just like Liz. If you are ready to free yourself of food and fitness anxiety, always feel on track, and show yourself that you can do hard things both in and out of the gym, book a connection call with Athena and explore which of her coaching services is the best fit for you and your fitness goals!