My Relationship with Running and My Recent 5k

For those of you who read my weekend recap on Monday morning, were any of you surprised to read that I actually ran a 5k road race?

Don’t worry, I was surprised too.

My Relationship with Running

My relationship with running began when I was in high school.  I mean, I guess maybe it started before that if I randomly “went for a run,” but in high school I joined the cross-country team.  Confession:  I only joined the cross-country team sophomore year because I got cut from the field hockey team.  Wah.  I’m obviously over that now, but as you can imagine that was pretty devastating as a fifteen year old.  Running cross-country, and then running track, ended up being a great experience though.  We had small teams so it very close-knit, and it was fun.  Even though I never brought home any awards.  I was okay, but never very good!  Now that I think of it, maybe I just filled the girls quota?!  Shoot…

When I got to college, I stopped running all together.  Ensue the dreaded freshman fifteen.  When I was home in the summers, I started running again (along with trying out cycle, muscle, and kickboxing classes).  I would run the Wakefield lake (I miss it there!) which was pretty much a 5k.  Once I started seeing improvements, I would run it twice.  I would say summers before junior and senior year I would run six miles a few times a week.  Go me!

Then the injuries began.  At this point, I was a senior in college dancing every single night as part of the Providence College Dance Company and teaching fitness classes part-time on campus (that’s how it all began, people!).  I really hurt my foot — it’s the first time I ever noticed my bunion issues (sigh).  And the first time I had to come to terms with the fact that dance AND fitness classes AND running could not all be in my life at the same time.  So no offense to all you runners out there, but running was the first thing to go.  It just wasn’t my passion.  I finished out my senior year dancing as hard as I could because as much as I didn’t want to admit it at the time, I knew I wouldn’t be doing anything more with dance aside from taking classes here and there after that last dance performance.

After graduation, I got my part-time teaching job at the Y, and well you guys know the rest.  But over the years I’ve struggled with my foot issues — I get arch pain, the bunions always act up, and there was a time I had that Achilles tendonitis too.  And this year my hip flare ups.  The injuries are just part of the territory.  But they make you stronger.  And sometimes allow you to take a step back.  And they also help you realize how amazing the human body is with its ability to heal.

All that being said, do I wish I could run more?  Yes.  Do I hate running?  No.  But do I love it enough to risk hurting myself again and be set back in my classes and other workouts?  No.  That’s why I don’t have many treadmill workouts posted, and I never really run on the road.  Just here and there if I feel like it or get the urge.  I’m always too scared that if I get too into it again, I’ll destroy myself…

So when my gym’s healthy living director forwarded us all a link to the Brian Honan 5k Road Race a few weeks ago, I’m not going to lie.  At first I groaned.  Running?!  ME!?

We weren’t forced to run but it was recommended that we all take part in some way.  Run, walk, volunteer, crawl, kickbox the whole way?!  It didn’t matter.  The charitable race is held every year (this was the ninth annual) in honor of a past city councilor, Brian Honan, who represented the Allston-Brighton community for quite some time before passing from cancer surgery complications.  He served several local organizations during his lifetime, including the Y.  Some of the proceeds from this race go toward the Y programs every year… so of course I was going to participate.

Check out all the Y participants, in our cool blue shirts (except Monique haha!) 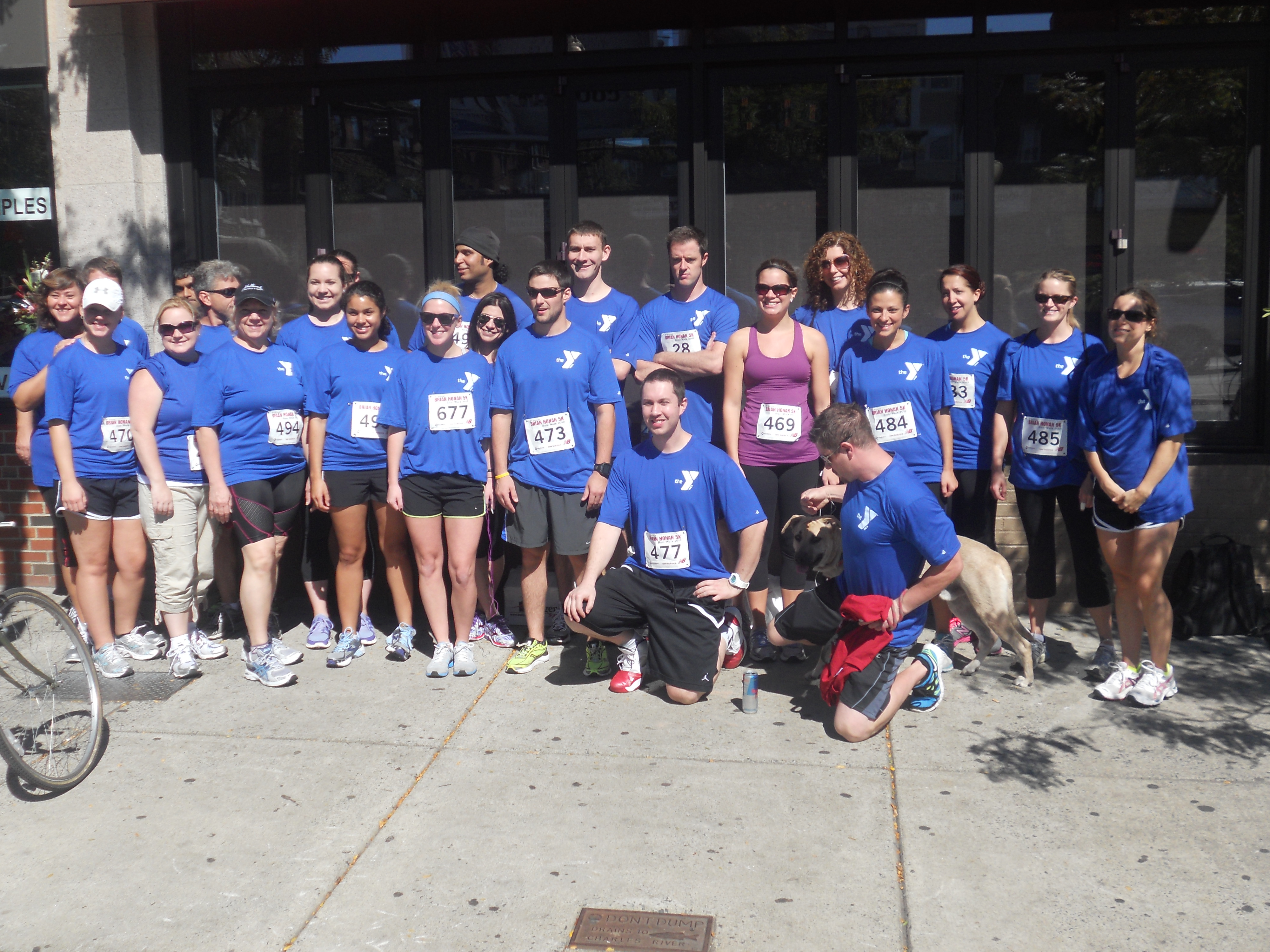 I was kind of unsure whether I would run or not until the morning of the race.  But then I decided “what the heck.”  Let’s just see what happens…  it was a beautiful fall day, so why not, right?

I ran the whole thing without needing to walk.

And I finished with a time of 27:53!  I am pretty proud of myself for doing that with zero 5k training.  Once I made up my mind that I was going to run, my two goals were to not walk and to shoot for under 30 minutes.

The course itself wasn’t very exciting since it was pretty much the same road the whole way down and back.  And “back” went UPHILL so that wasn’t very fun, obviously.  The loop began at Tavern in the Square in Allston, it passed through Union Square, onto Cambridge Street, and then onto Washington Street through Brighton Center before looping back to finish at Tavern in the Square.  Having the route go back on the same street you ran down initially was good though because all my gym peeps that walked the race were cheering me on as I passed them on the way back.  That was encouraging!  But having Ashley running next to me for the majority of the race was the most encouraging of all.  Ash, you kept me going!  We were booking it!

Look, some pictures of us SMILING:

Those must be from the beginning because I know I was definitely huffing and puffing and not smiling so much by the end!!  Definitely had to pep talk myself a few times to keep finishing.  But that feeling when I crossed the finish line was awesome!

Gym friends after the race:

And of course Tim was a supportive boyfriend cheering me on as well. 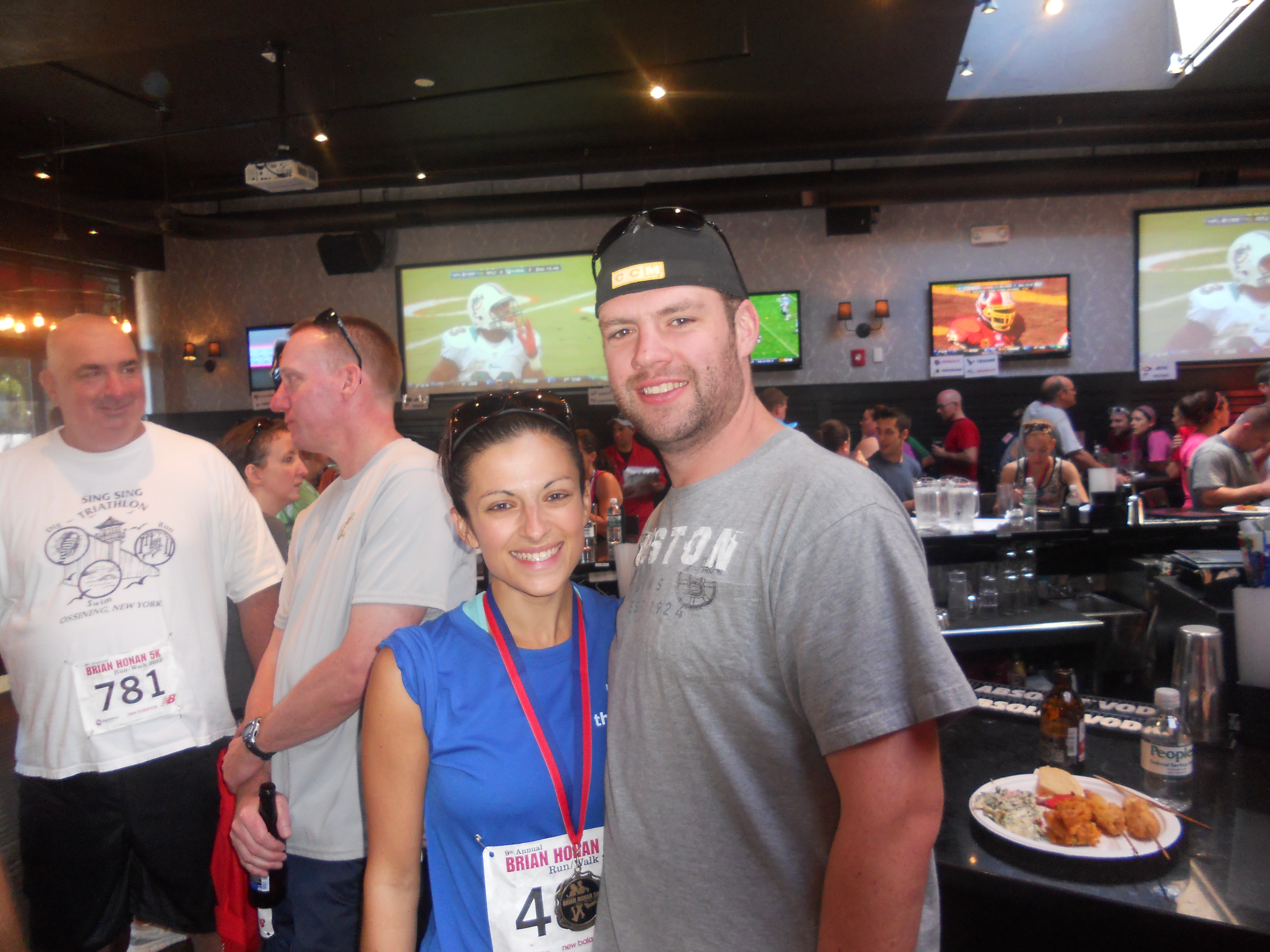 After the race, we stopped in at Tavern in the Square — they had some food out and were hosting the after party and awards.  Side note — two of my instructors placed for their age groups!  Amazing!  And Monique set her personal record… so great!

I slugged down a regular water and a seltzer water, then celebrated with a victory beer.

I was nervous for how my hip would be feeling this week, but I’ve been doing a ton of stretching and foam rolling and *knock on wood* I feel okay.  I mean, holy CRAP my legs were so sore for a few days afterward, but that’s a good thing.  It’s kind of amazing how I can teach or take three classes in a row and make it through and be completely fine the next day… but this 28 minute run kicked my bum.

Despite the butt kicking, I’ve made a few comments like “I wonder what my time could be if I did actually train for a race.”

I kind of want to try another one.  But I’m still nervous about injuries!  Some might say that I shouldn’t hold myself back from trying “just in case,” but I know my body.  My problem is… I love all kinds of exercise so much and don’t know how to say no and not do EVERY SINGLE class and try EVERY SINGLE opportunity that comes my way EVERY SINGLE week.  I guess I could have worse problems, but this is a “problem” for me nonetheless.

What about you guys?  What’s your relationship with running like?  Do you love it?  Hate it?  Love to hate it?  Any advice for me?!

I’ll leave you guys with this amazing running reference that Jen posted on her Facebook this week… apply any kind of workout… I love it!! 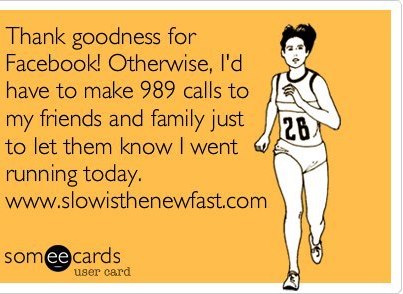