I wish it were still the weekend!  I know everyone probably says this every single Monday, but this weekend was so fun.  Ashley and I took a little road trip out to New York to visit Jen, who is back in the United States for two weeks and staying at her parents house.  Jen beat me to blogging about the weekend, but she honestly sums it up perfectly with this sentence:  “I seriously just really loved having a healthy dose of girl time – filled with good food, drinks, a workout, and fitness talk (my secret favorite indulgence).”  I couldn’t agree more.  The only other thing I would add is that I really just loved sitting and doing nothing except chit chatting over breakfast and coffee.  It was nice to be somewhere that I didn’t feel obligated to clean the house or guilty about not doing something else.  You know, Type A problems.

When Ashley and I arrived on Friday afternoon, Jen showed us to our rooms where she had some treats waiting for us next to our beds.

Two funny cards, Saratoga Springs sparkling water, bottled water, pistachios, tea from Canada, and body butter.  It was like a little bed and breakfast!  We were pretty much starving when we got there, so we headed out to a little brewery called Davidson’s for dinner on the early side. 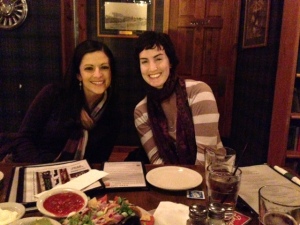 We split nachos, and I ordered the turkey apple melt which consisted of sliced deli turkey grilled on wheat bread with cheddar cheese, green apples, tomato, and cranberry aoili.  I kind of hate the word aoili because 1) I can never spell it, and 2) it reminds me of an areola.

We spent the rest of the night hanging out at a couple different bars in Glens Falls.  The funniest moment was cashing in our free beer tokens.  I can’t really reenact the humor via this blog post, but we were all dying laughing.  One of those “had to be there” kind of moments.

On Saturday, went spent a solid chunk of time sitting in the kitchen over a ginormous breakfast just catching up on life and drinking coffee.  Well, juice for Ashley, but multiple coffee cups for Jen and I! 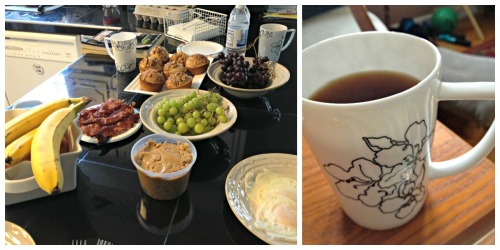 One of my favorite parts of breakfast was Ashley’s homemade pine nut butter (I seriously just wrote pine but nutter at first baha), and it was so good.  Especially on the homemade muffins that Jen’s mom made.  We were spoiled!

Eventually we decided to stop lounging around and got ready for, what else… a workout at the local Y.  I posted on Facebook this weekend that some people may call this pathetic or crazy, but I love that we worked out at the Y during our weekend.  Tim texted me as we were walking in the gym to ask what we were doing.  I replied, “we are at the Y” to which he responded, “you guys are weird.”  Tim, I say psssh to you.  Working out with Jen again was so great!

Since all three of us had already done our Best Body Bootcamp workouts for the week, we wanted to do something different for Saturday.  We felt inspired by Jen Ryder’s Facebook post that morning that said she did Bob Harper’s deck of cards workout, so that’s what went with.  The basic premise of the workout is that each suit of cards represents a different exercise of choice.  For number cards, you do that many reps of the exercise.  Face cards all equal 10 reps, and aces equal 11.  You just flip through the cards and get sweaty!!  This would be a great workout idea for traveling on the road, especially because you could pick exercises that don’t require any equipment.

For the first round, here’s what we decided to go with:

Note, the squats were weighted squats!  We held dumbbells.  We had trouble with the math, but I am pretty sure going through the whole deck makes you do each exercise 95 times.  That being said, we were sweaty and shaking, but secretly (or not so secretly?) loving it.

After a quick break, we went with round 2.  We changed our original plan up a bit:

If you are wondering what a plieT is, it’s really just a plie with a spelling error.  We did the jump plies by doing two hops (feet together), then one big plie, then jumping back into the hops.  Jen started singing “we will… we will… rock you” as we were doing them, and that’s actually a great way to explain the timing of this move!  Two hops on the “we” and an extra long plie hold on the “will.”  Some more sweaty pics: 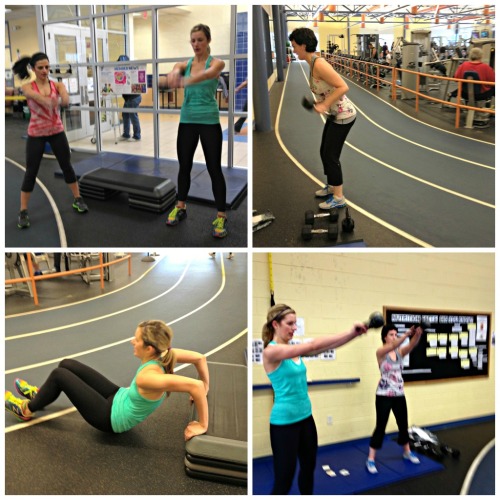 After our workout, we grabbed a late lunch at the cutest little café called Rock Hill Bakehouse.  Jen and I ordered the same lunch, which was a delicious salad with a side of veggie black bean chili.  I was proud of myself for ordering something (and finishing something) that had a little kick to it! 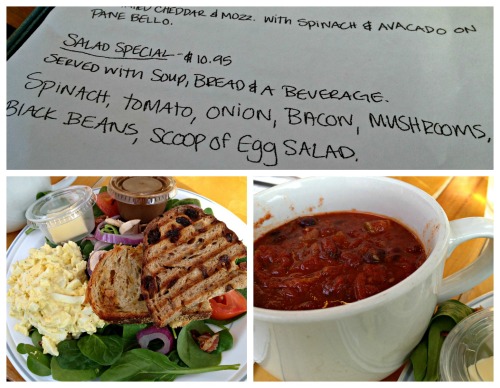 This meal hit the spot after our workout.  Saturday night we headed into Saratoga Springs, which I am actually bummed we didn’t get to spend more time in.  The town had a really cute downtown area with shops and different restaurants.  It’s okay though, because next time Jen is home we can put that on the to do list.  Well, maybe not next time since next time is technically her wedding, but you get the idea.  We spent the first part of the night in Cantina sipping on some delicious pomegranate margaritas.  I also couldn’t stop daintily eating chips of a small portion size.  Eventually we got hungry again for dinner.  I ordered shrimp tacos, my second spicy-ish meal of the day.  Go me! 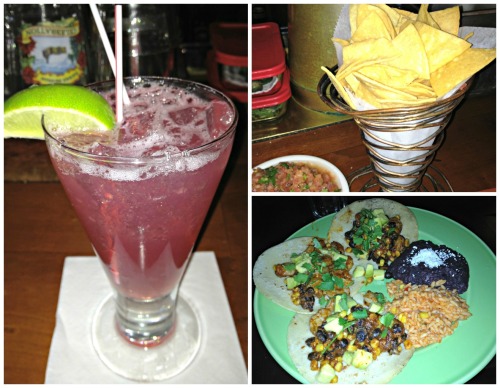 The rest of the night was spent at another bar, where we proudly rocked our long sleeved sweaters and scarves amongst a crowd of, uhh, interesting outfits.  After some awesome people watching, a little dancing, and a very chatty cab driver on the way home, we called it a night.

Sunday morning we were a little sluggish, but some more coffee and chit-chat over breakfast helped with that.  It was so great to just talk for so long about LIFE, and especially being able to have in-depth conversations about fitness and blogging with friends that just get it.  I was sad to leave, but happy we had the chance to see Jen while she was back.  Thanks for a great weekend, Jen!

How was your weekend?  When’s the last time you visited a friend that moved away?  Have you ever done the deck of cards workout?

I’ll be back later with my Weekly Workouts post for this week!  Catch you then!