Let me share a little story about Tim meeting my parents for the first time.  I guess technically the first time he met my parents was at my grandmother’s wake, but that doesn’t really count.  The first time he met my parents for more than two minutes was eating dinner at a Greek festival (obviously).  At the time, Tim had just hit his fifty pound weight loss mark (he lost 30 pounds before we started dating and about 20 pounds after we started dating).  My parents were making conversation and asking him how he lost the weight.  Tim answered with the usual “eating better,” “being more active,” etc.  And when my mom asked what he liked to do for physical activity, Tim replied that he had been running more.  It was then that my dad, in true Chuck fashion, got excited and said, “Oh! I’ve been meaning to sign up for a 5k.  Want to do one together?”  And Tim had pretty much no choice but to say yes.  I mean, you can’t say no to a girl’s dad the first time you meet… can you?

So they did sign up for a race, and Tim started training for it.  At this point in my healthy living journey, I wasn’t into running AT ALL (read my relationship with running post here), so I had no desire to join them.  In retrospect, that was kind of mean of me, huh?  I also wasn’t AS into healthy eats as I am now, so when my dad and Tim ran their race together, I stood on the sideline and ate a hot dog.  Not joking.

Since then, I’ve slowly added running back into my workout repertoire, but until this summer it wasn’t very consistent.  I would just do a few treadmill workouts here and there.  However, this summer for some reason I decided to start running again.  Maybe I was bored with my current routine, maybe I found it a time saver to not go to the gym, maybe I just liked being outside.  Whatever the reason, I’d say that since July or August I’ve done a 2-3 mile run on average once or twice a week.  And then last month Tim and my dad decided they were going to run another race together, the Oak Square YMCA’s annual Oaktoberfest 5k.  This time I decided to up my mileage a bit and join them instead of just getting another sideline wiener.  So I continued running through the fall (still only once or twice a week to be mindful of my injuries), but it must have done SOMETHING for me because I had a great race on Sunday.  I set a personal record of 24:46, and it just felt awesome.  The last time I ran a 5k I ran it in 27:53, which means I shaved a good three minutes off my last time.  So exciting!

Here are some scenes from the race: 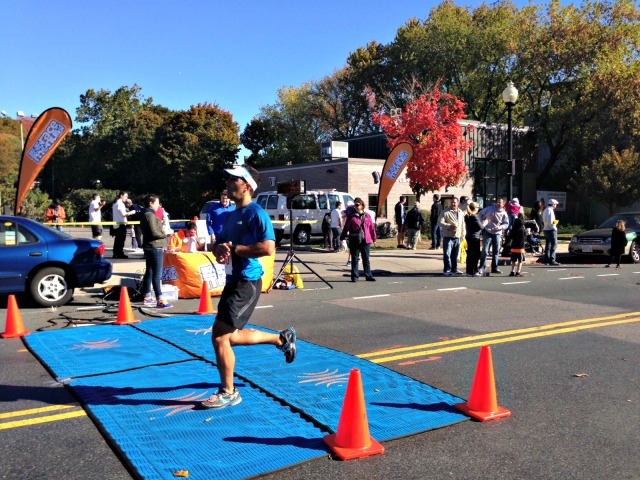 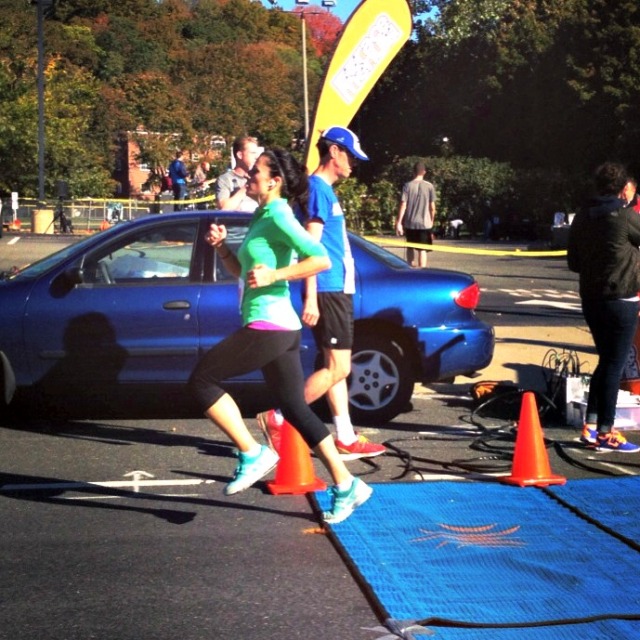 My cousin Dean joined us for the race as well, which was fun.  He’s super into triathlons and races, so this 5k was an easy jog for him.  He placed second in his age category and came in 7th overall around 19 minutes! 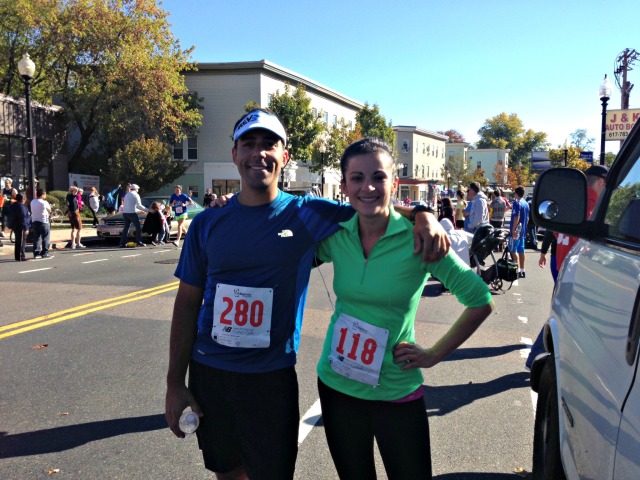 I’m also really proud of both my dad and Tim, because both beat their previous times and ran within the splits they wanted. 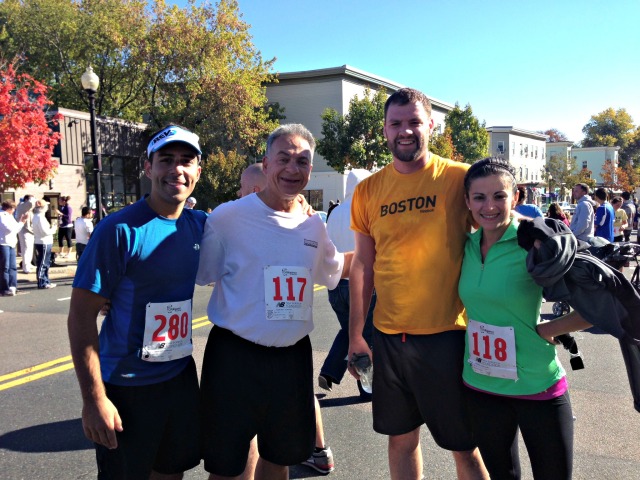 Last year after the race, the Y had a big health fair in the gym (remember I helped plan that day which is why I didn’t run this race last year?), but this year they decided to do an outdoor “taste of Brighton” instead.  So there were restaurants like Fiorella’s, CafeNation, the GreenBriar and Dunkin Donuts there.  They also had a live band and some cornhole tournaments set up.  We stayed for a bit to grab a quick bite and see the awards, but we left shortly after that because there wasn’t too much else going on.

It was definitely a fun Sunday morning, and I’m glad we all ran together!  My dad is already looking up what the next race is he wants to do, so there may be more 5k’s in my future soon.  We’ll see!

When’s the last time you ran a race?  How far did you run?  Any fun PR stories to share?  Did any readers run the Oaktoberfest as well?

Have a great day you guys!