Good morning! Hope you all had a great Halloween weekend. Did anyone get dressed up? This was the first year that I didn’t dress up for either a party or a fitness class. And I’m kind of okay with that.

Friday I worked from home, and I was really busy catching up with post health fair to do items. I took a yoga class at Corepower to break up my day, but I ended up working pretty late that night. 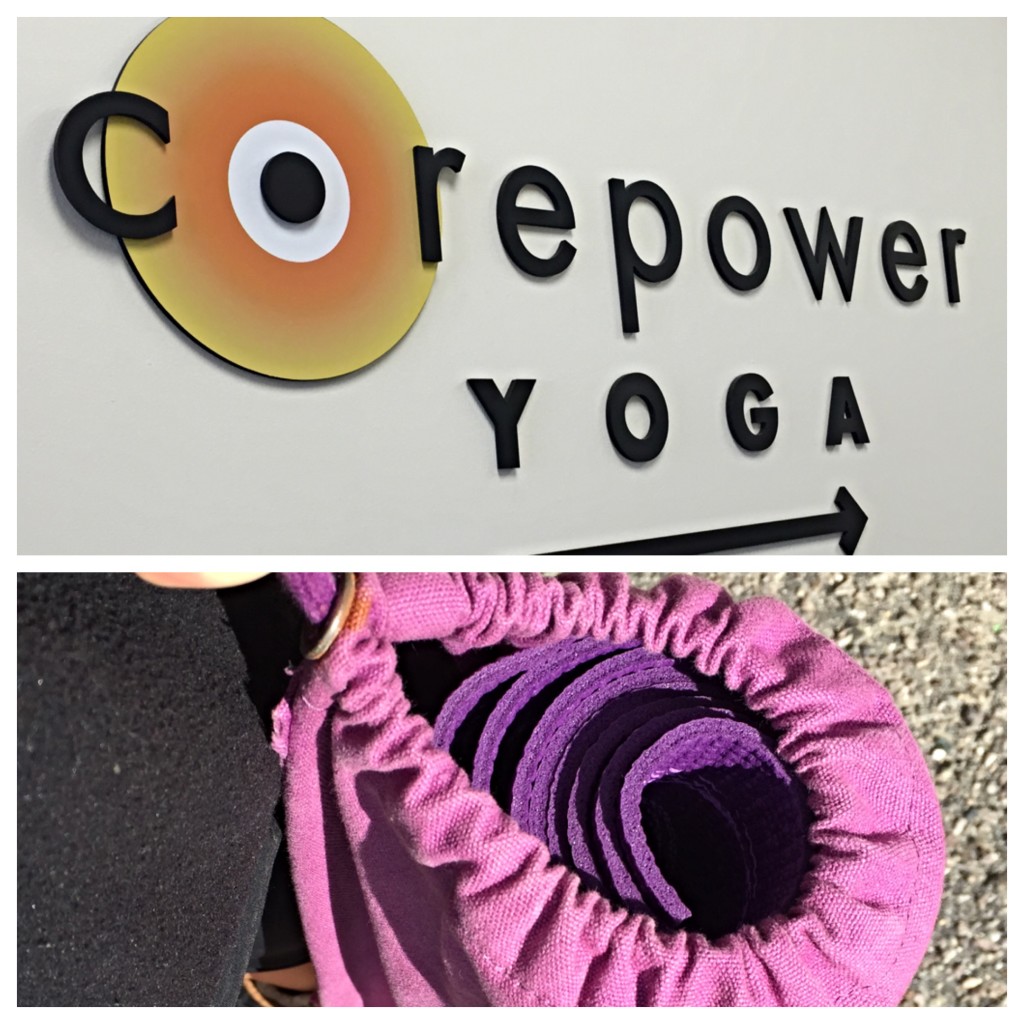 Tim and I stayed in to relax and catch up on TV. We received an ah-mazing delivery to our front door from CartFresh, a grocery delivery company that recently partnered with Russo’s Produce in Watertown for the launch of Russo’s first home delivery service. Everything in our delivery was spot on for our tastes and likes. More details on this to come! 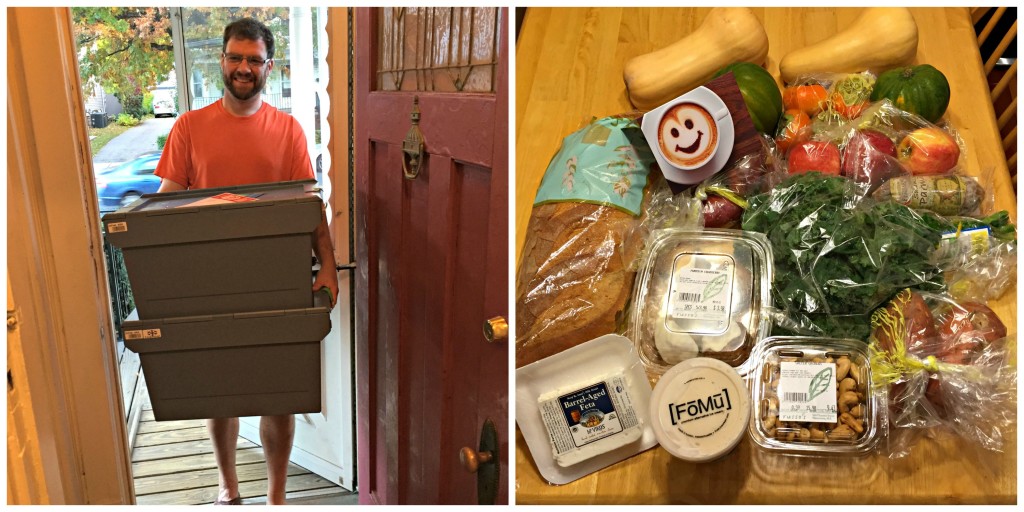 Here was our Friday night wine of choice: 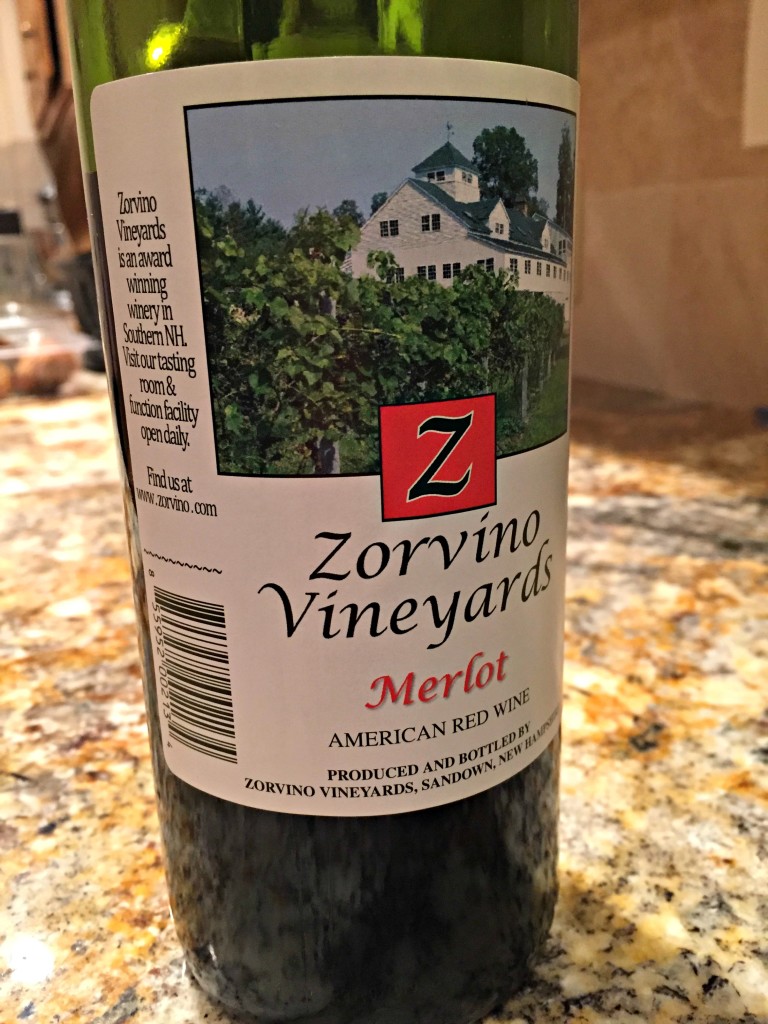 We were also too lazy to cook dinner, which meant takeout from Fordee’s Falafel and Deli instead. I ordered a falafel salad. The salad part was a bit weak, so I ended up adding some veggies from home, but these falafels were to die for! 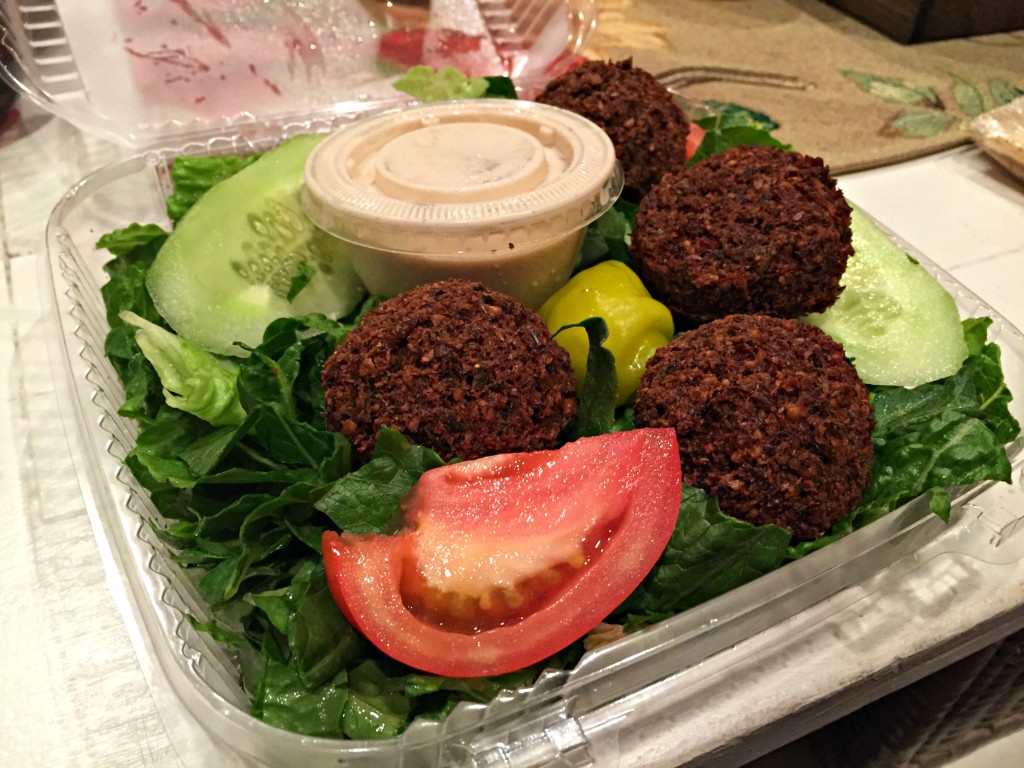 On Saturday, we headed to Canton to run in the Blue Hills Brewery’s 4th annual Halloween 5k: 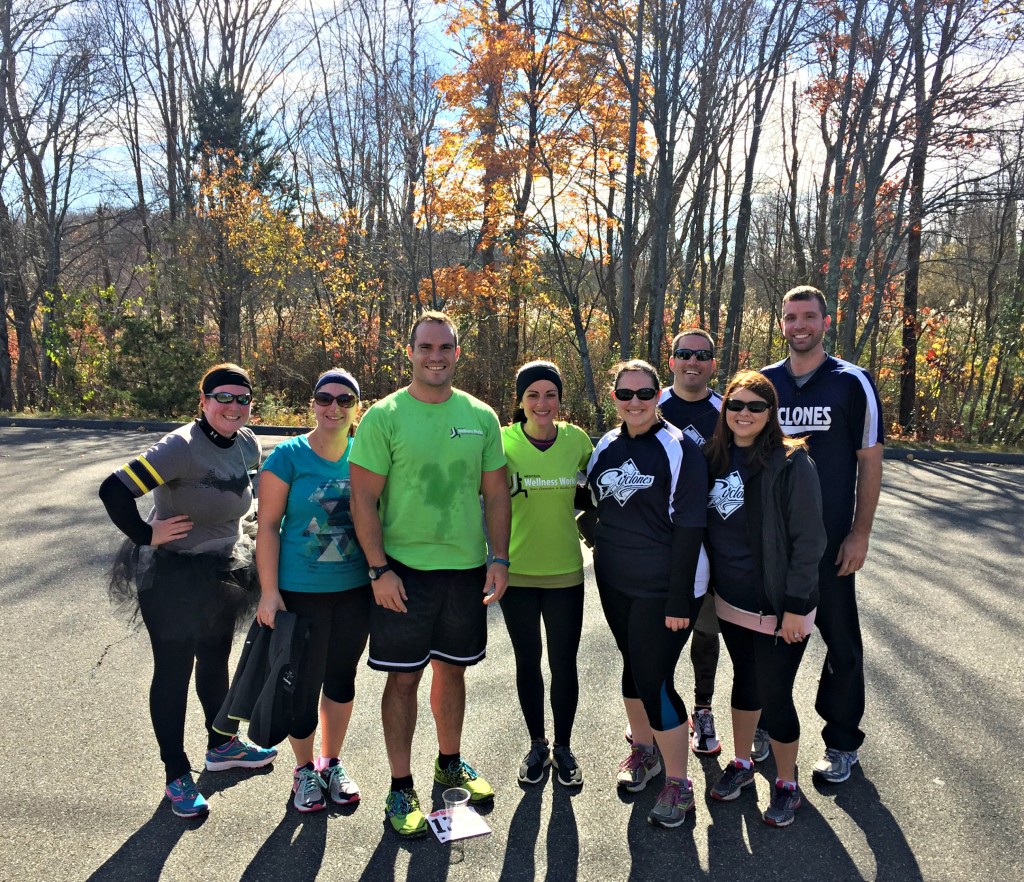 This fall at work, the wellness committee put on a nine week Cube to 5k program for beginner runners. This race was an option we offered for the culmination of the running program, but runners of all levels participated and brought their friends and family. 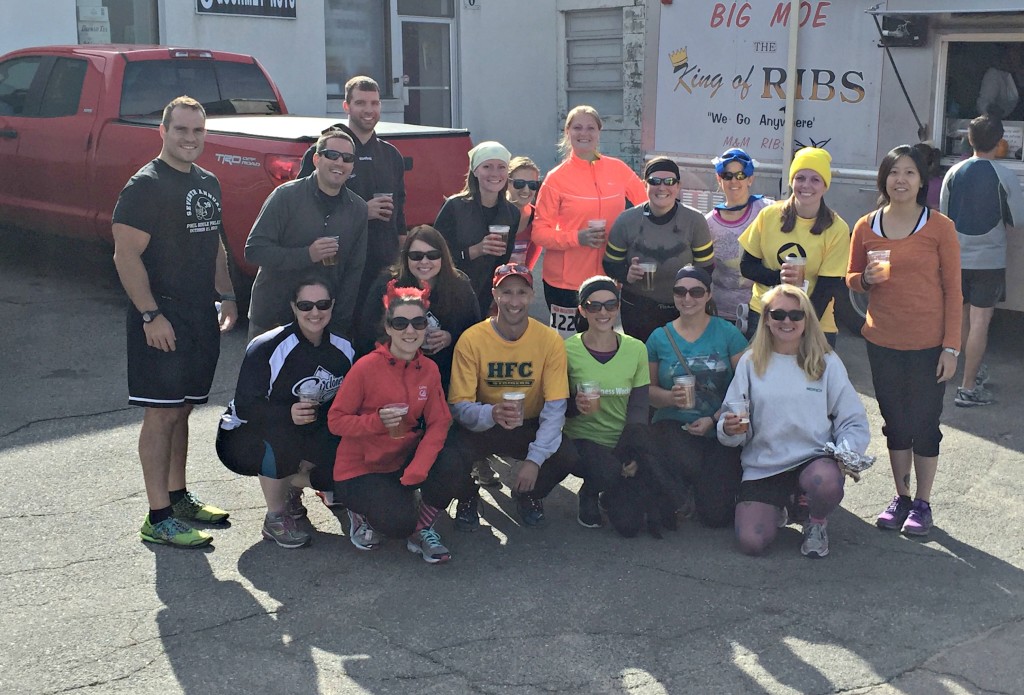 The race itself was pretty low key. They didn’t have an official timing system (the brewery owner stood at the end with his stopwatch), and they ran out of safety pins so I didn’t even get a number. We were laughing about it though, and most people seemed more interested in the two drink tickets and food truck at the end than they did in their official times. I actually received many comments about how it was funny that the company’s wellness coordinator chose a race that offered beer and ribs at the end. What can I say!? 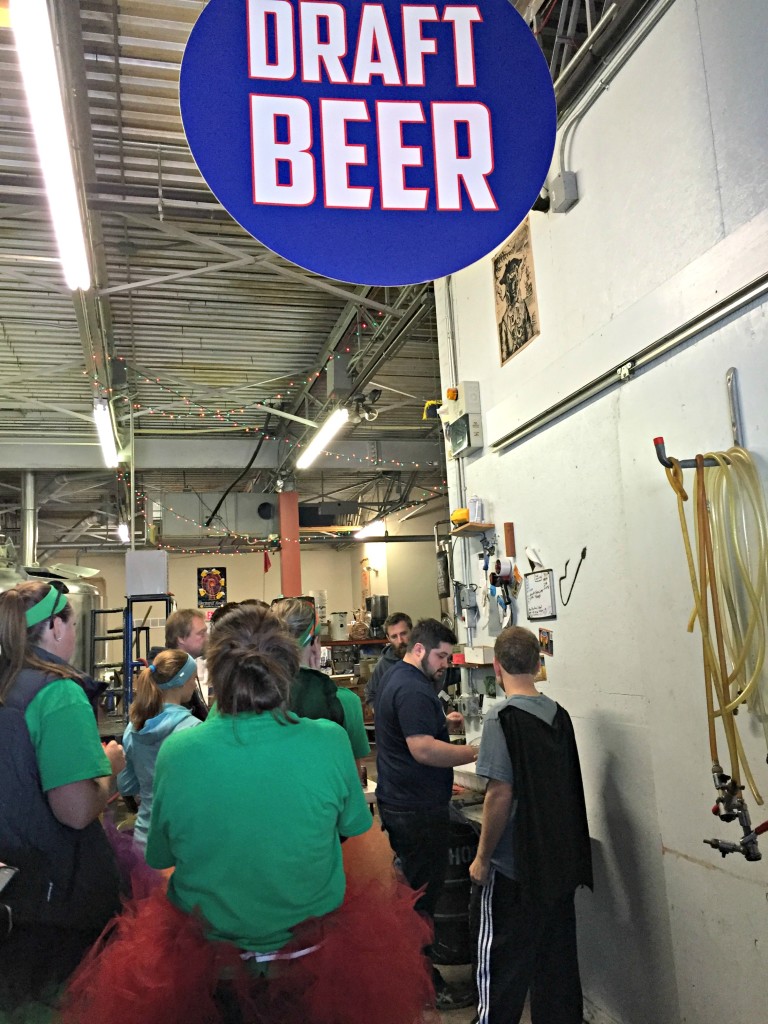 I think I ran somewhere around 25:35 on Saturday, and I actually came in second overall for all women who participated. Tim was mad that I didn’t sprint fast enough to beat the woman who came in first – we would have gotten to take home an entire case of beer! Sorry hubs. 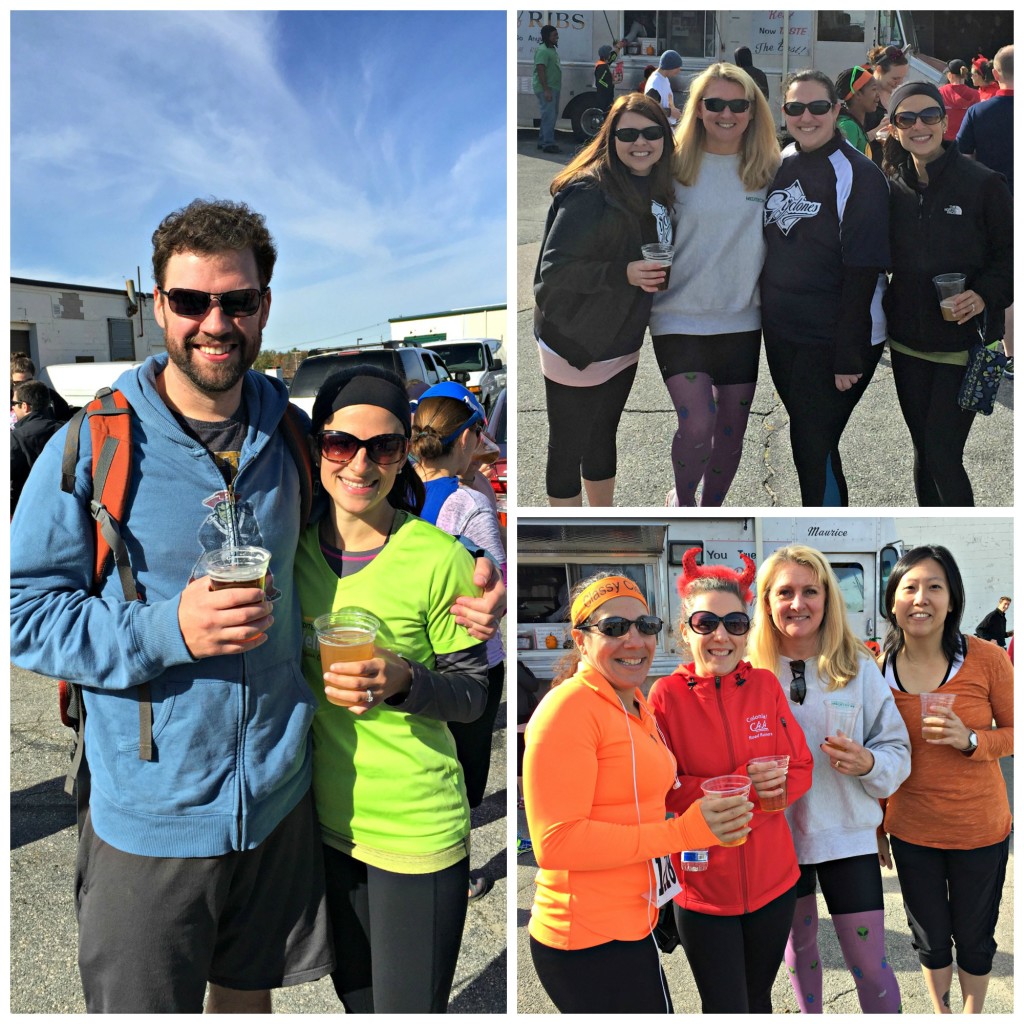 After the race, we all hung around a bit, and then some of us ended up continuing the fun at the Turnpike Cafe down the street. We got a couple more beers and some food for the table. I ordered a cup of the beef chili, and it totally hit the spot. 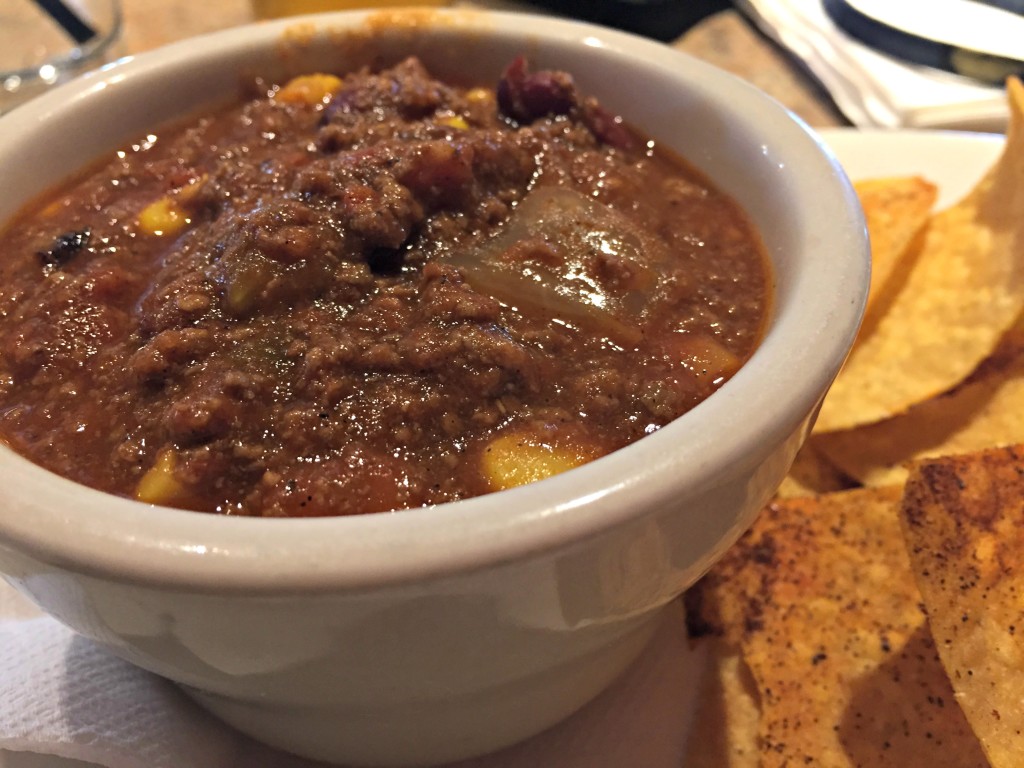 When Tim and I got home, I was exhausted, so I took a nap and totally missed all the trick or treaters. Fail. I woke up just as dinner was ready. Chicken, mashed butternut squash, and sauteed Swiss chard for the win. The rest of the night was spent on the couch! 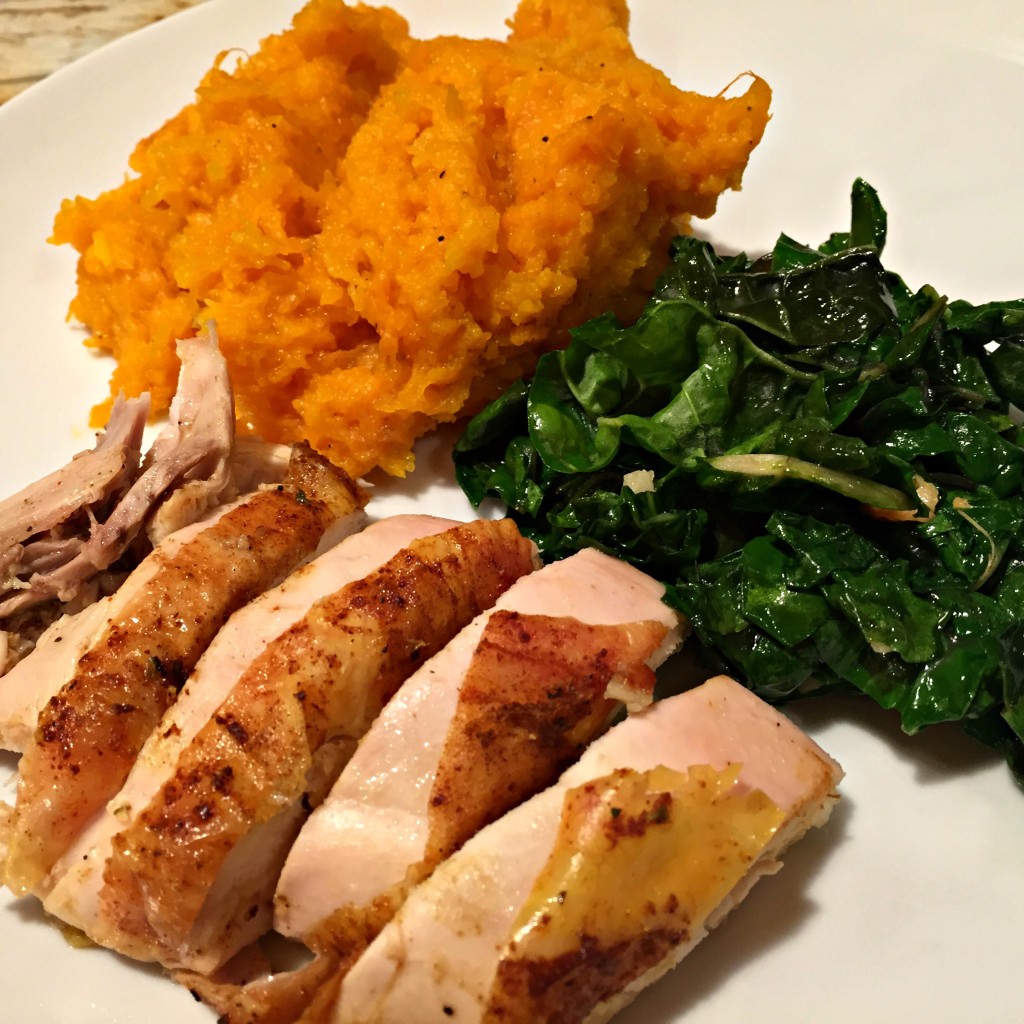 On Sunday, I met my friend Erin and her adorable baby Henry for brunch at Aquitaine in Legacy Place. 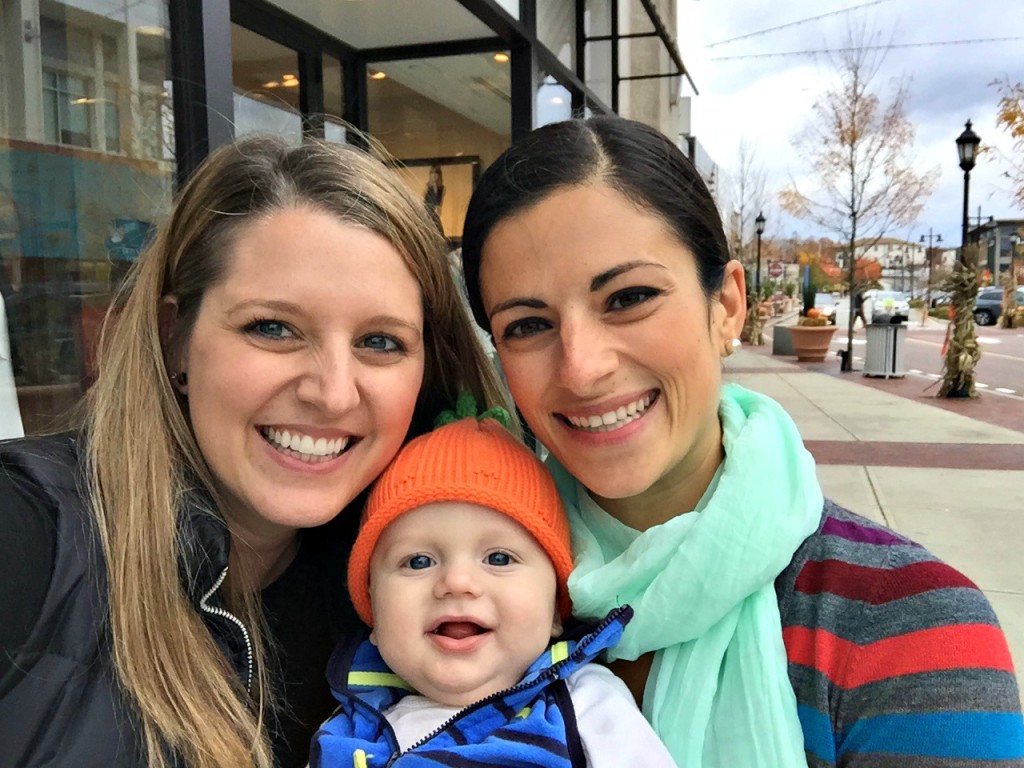 Aside from my bridal shower and wedding, Erin and I hadn’t seen each other in SO LONG. Our catch up was way overdue! We gabbed for a few hours over breakfast and pomegranate mimosas. 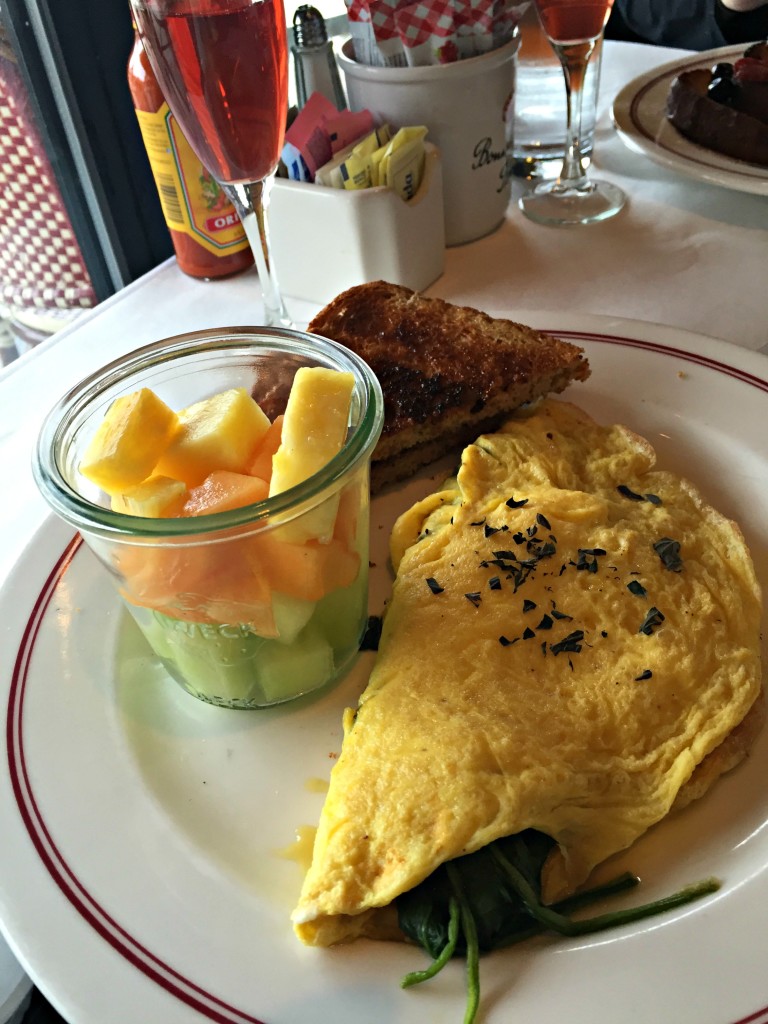 After breakfast, we walked around and did a little shopping before leaving for the family parties we both had that afternoon. I was so happy to get to spend some time with Erin and the baby, and seeing one of my best friends in her element as a mom was so great. 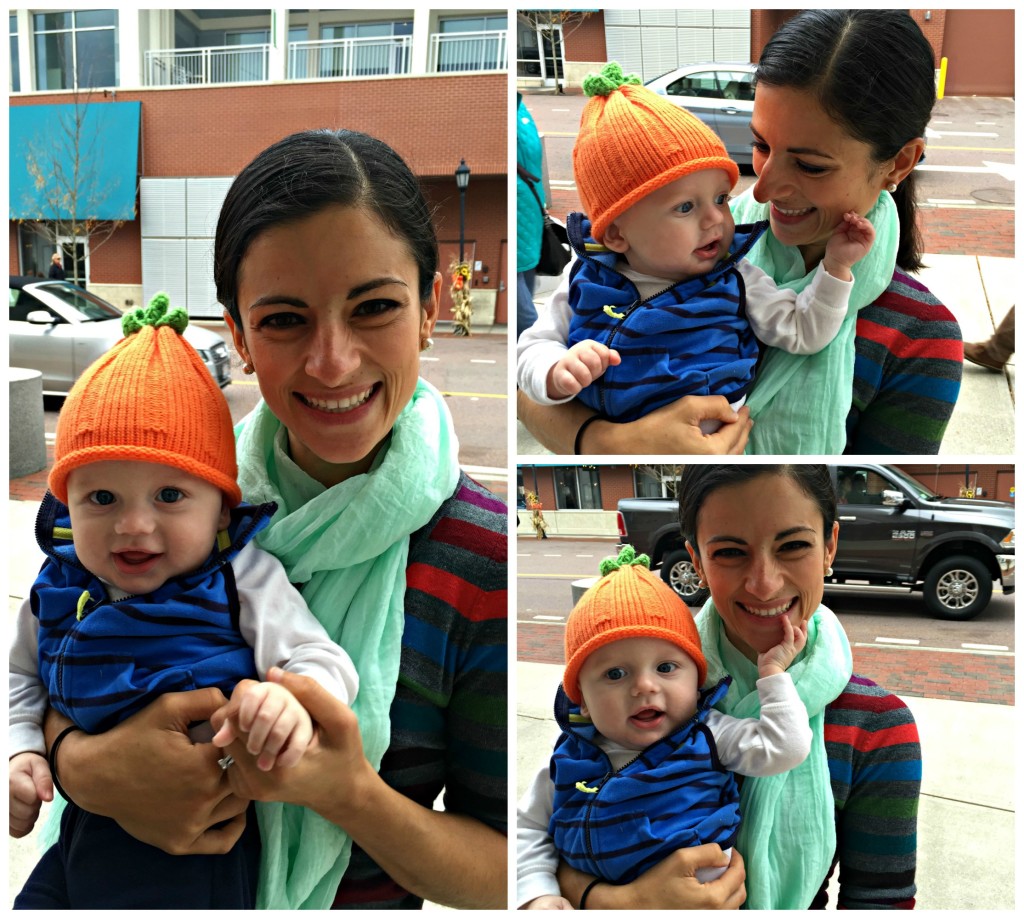 The rest of my day was spent at Tim’s cousin Kelly’s house for his other cousin Neil’s 16th birthday party. 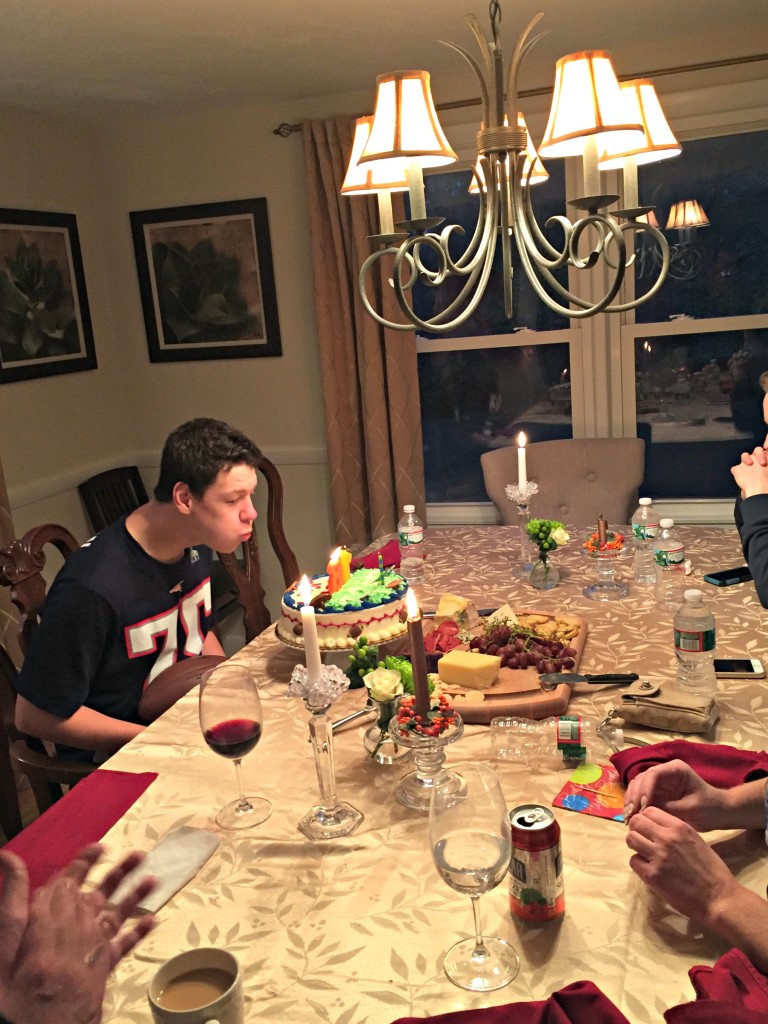 We weren’t feeling in the mood to food prep when we got home, so that will happen tonight. We just got caught up on The Walking Dead and went to sleep. All in all a good weekend!

Readers, let’s chat! What happened over the weekend? I’d love to hear your highlights!