During one of the many New Balance Girls Night Out events over the summer, I had the pleasure of meeting Heather Stevenson, the owner/founder of Thirst Juice Co., a company that serves made-to-order juices and smoothies and always serves the most delicious post workout drinks during NBGNO. When Heather invited me to come in to come in with a guest for a little in person tour in August, it was a little too hectic for me with wedding planning, so I asked if we could hold off until the fall. Heather understood and kindly agreed. 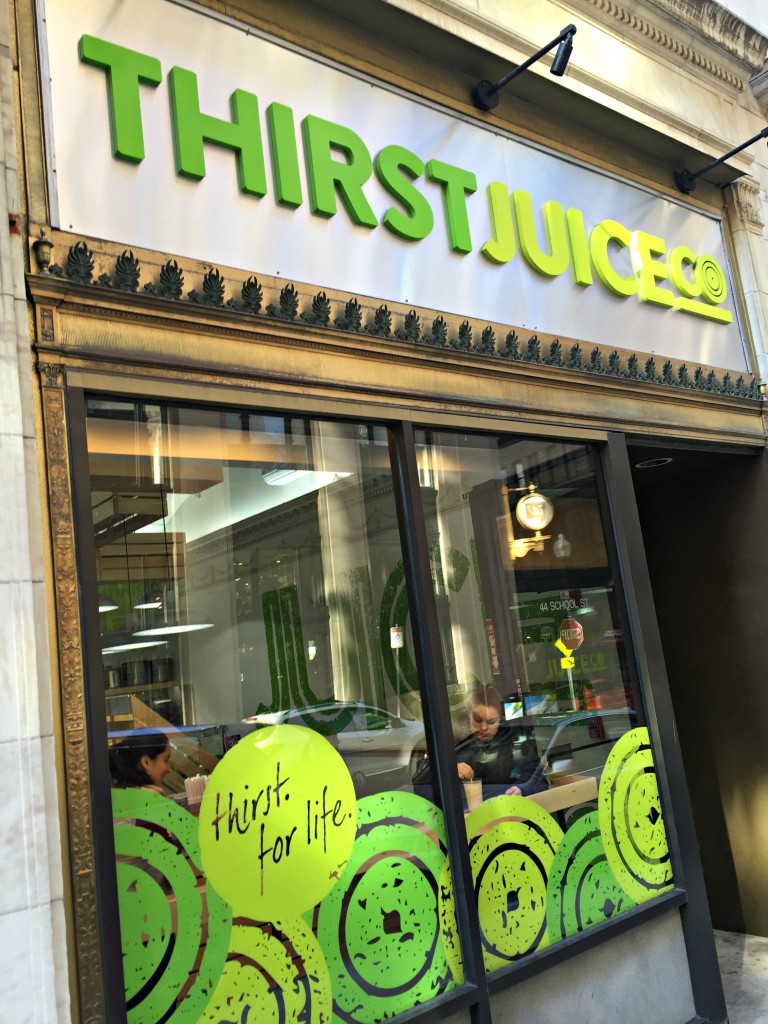 A couple of weeks ago, I finally reached back out to Heather to see if my friend Steph and I could come in after taking a fitness class in the area. We picked a date, and then Steph and I headed downtown to the financial district for a Saturday morning day of fun. We maximized our city time and first got a sweat sesh in at Brick Boston, a nearby CrossFit facility. The class we took was called BX Bootcamp Cardio Fitness, and it was right up my alley: lots of timed circuits with pushups, goblet squats, kettlebell swings, and cardio intervals on the treadmills and rowers thrown in. It seemed a little disorganized at first, but then we learned it was the instructor’s first class, so we’ll cut her some slack. Been there! 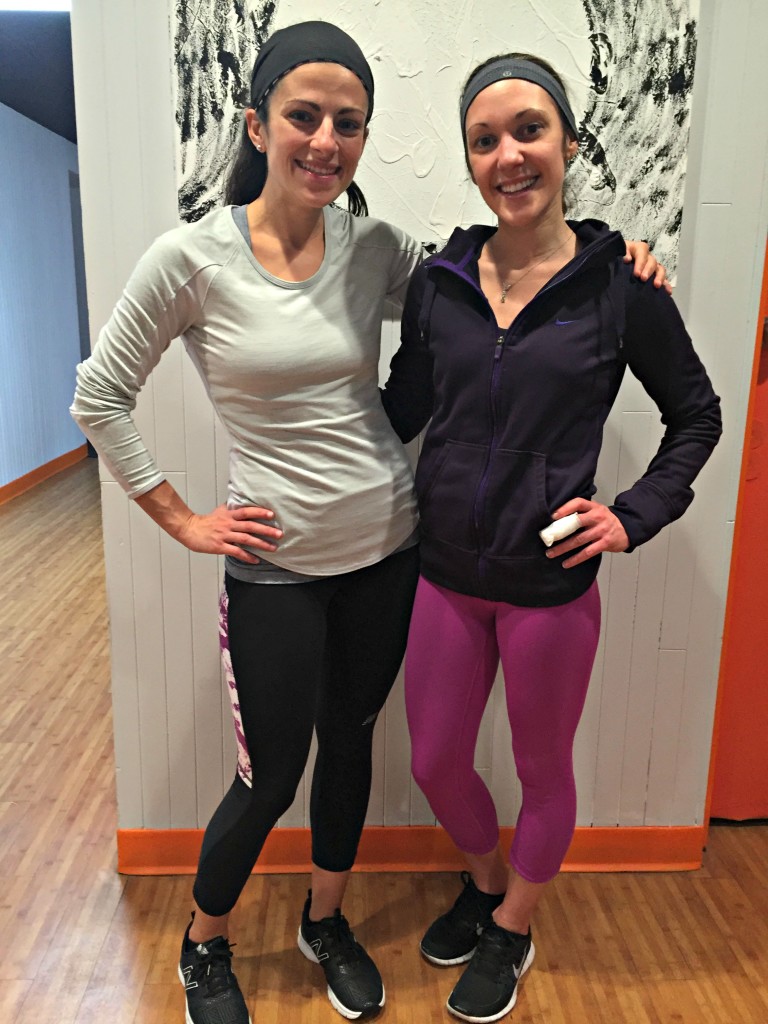 After class, we headed over to Thirst to chat with Heather and try some post workout goodness: acai bowls, juices, smoothies, and more! Before we got to the goodies, we learned a little bit more about Heather’s background: she and her husband were lawyers living in New York City when they decided they wanted to open up some type of restaurant. After exploring their options, they decided on a juice bar. Heather told Steph and me that she is an endurance athlete and has run many marathons throughout her life. While she and her husband were training for an ultra marathon (impressive!), juices and smoothies really assisted with their energy, post workout recovery, and overall performance, and that’s really what inspired the concept of Thirst Juice Co.

Heather also explained a little more about how they came up with the name Thirst. She said that not only was there an obvious connection to their main product offerings, but the definition of thirst is to have a strong or eager desire or craving. Their slogan is “Thirst. For Life.,” and this was born out of Heather’s strong belief that people should always strive to live life outside of the mundane and want to feel better, be better, and become more educated (yes, yes, and yes!). “Thirst. For Life.” reflects Heather and her husband’s love of adventure, exploring new places and flavors, and staying active and healthy. 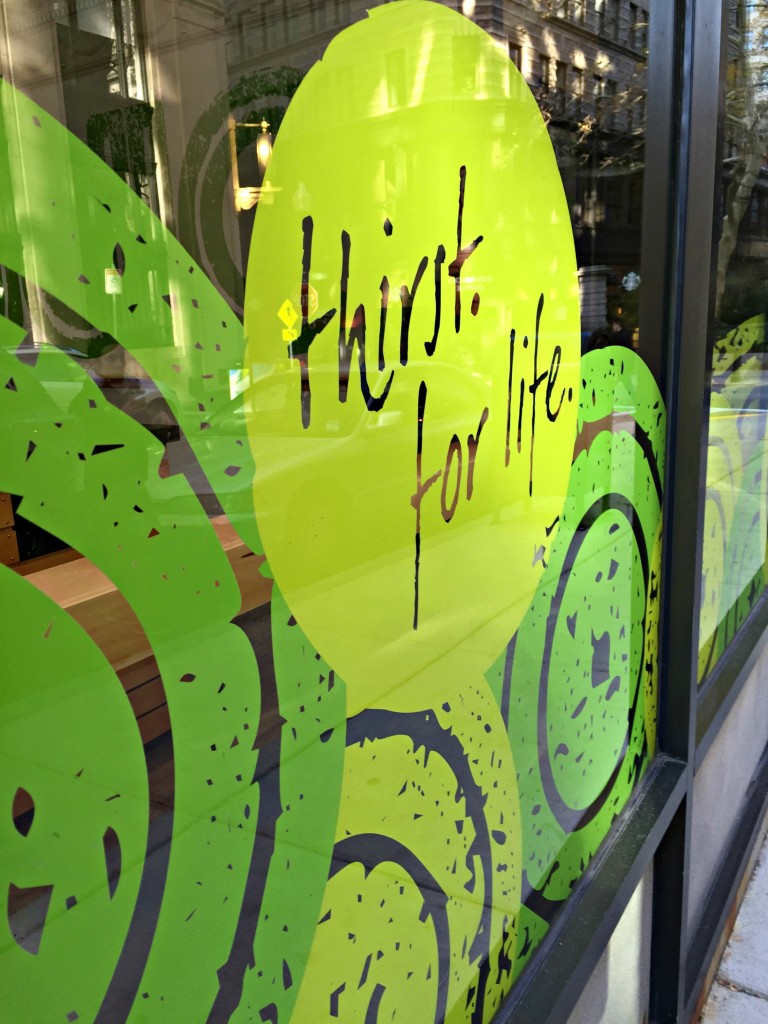 It was clear that Heather truly lives by these values, as I found she was a wealth of information during our visit. She was extremely well versed in the benefits of everything offered on her menu (all from self-education!), and I always appreciate chatting with someone who clearly understands and can articulate the whys behind the company’s product offerings. For example, when I asked her to explain what the heck wheatgrass is (you can see it growing in the bottom left of the picture below), Heather was able to tell me right away that wheat grass is a boost loaded with nutrients, antioxidants, and detoxifying components. It’s actually a natural energy booster, so it can have a similar energizing effect as coffee, but without the crash that comes with caffeine.

When I asked Heather what differentiates Thirst from all the other juice bars and smoothie places popping up all over Boston, she said three things: 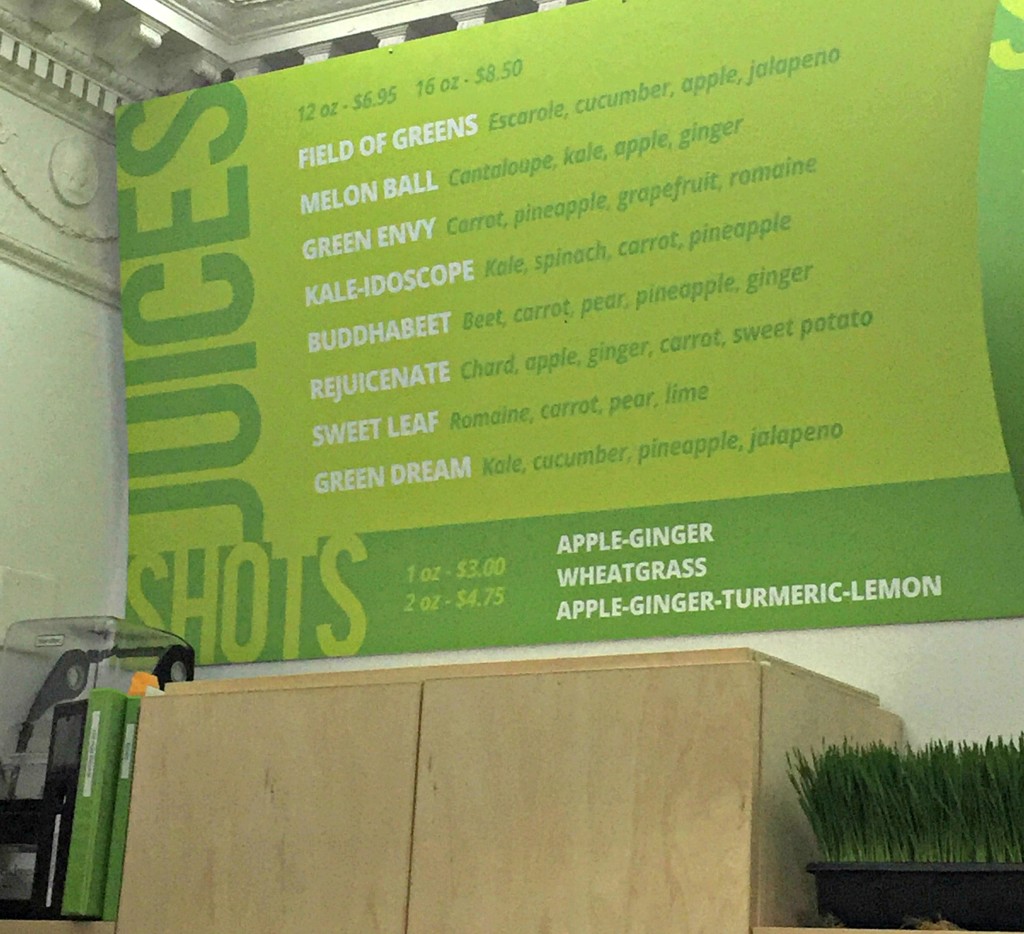 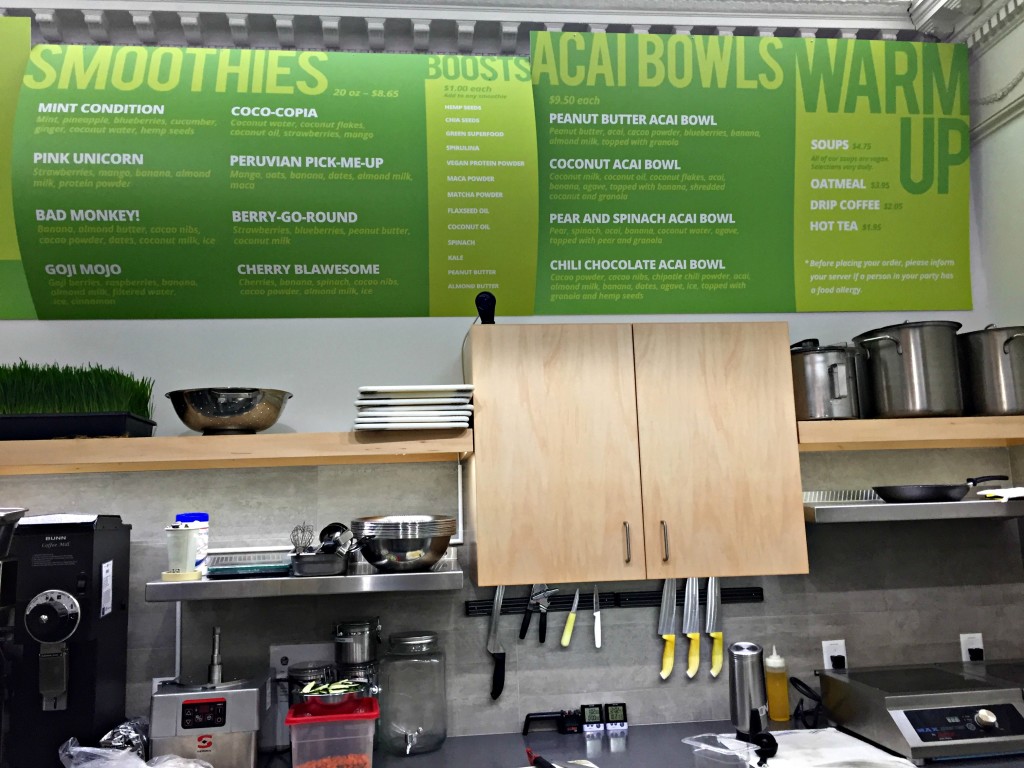 As for the items Steph and I tried during our visit, we sampled a little bit of everything! We first each had an acai bowl, a concept that I was only just introduced to this summer. Acai is a berry that’s kind of a cross between a grape and a blueberry, and an acai bowl is basically a smoothie that you want to eat with a spoon instead of just drink!

I ordered the peanut butter acai bowl which was a bowl full of peanut butter, acai, cacao powder, blueberries, banana, and almond milk, and I topped it with granola and extra banana. 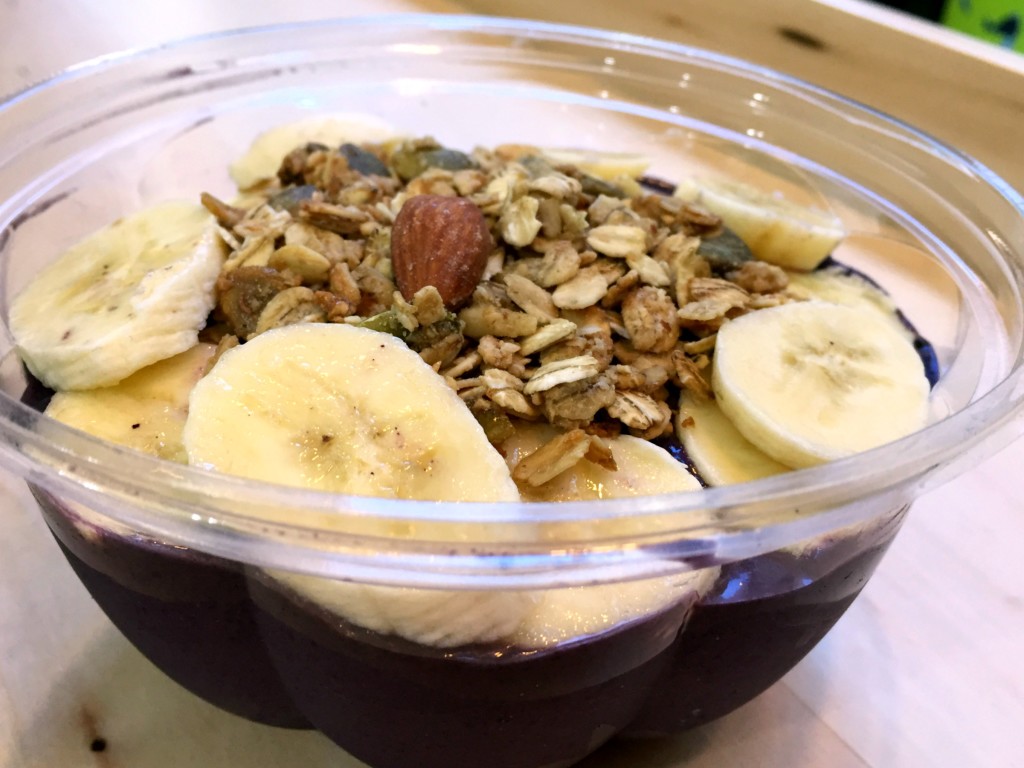 Steph opted for the coconut acai bowl which came with coconut milk, coconut oil, coconut flakes, acai, banana, and agave. It was topped with banana, shredded coconut, and granola.

Both were absolutely delicious, but Heather told us if she had to pick one to be the best fit for a post workout protein option, she’d recommend the peanut butter. 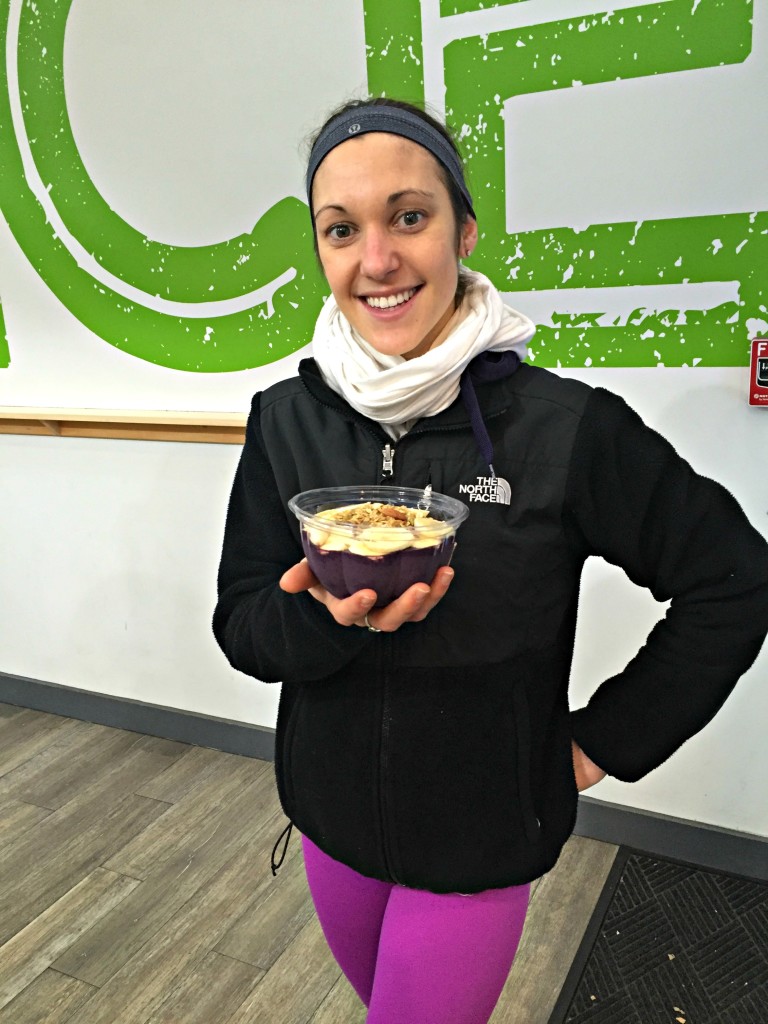 Next we had a few samples of everything. For a juice, we decided to sample the Buddhabeet, made with beet, carrot, pear, pineapple, and ginger. Isn’t that the best name? Buddhabeet! I typically don’t love beet based juices because they are a little too strong for my liking (I’ve actually spit beet juice out in the past despite loving beets themselves), but Thirst Juice Co. changed my mind about this. The Buddhabeet wasn’t overpowering at all. We learned that this juice is a great choice for endurance athletes because of the way the nitrates break down and improve performance. 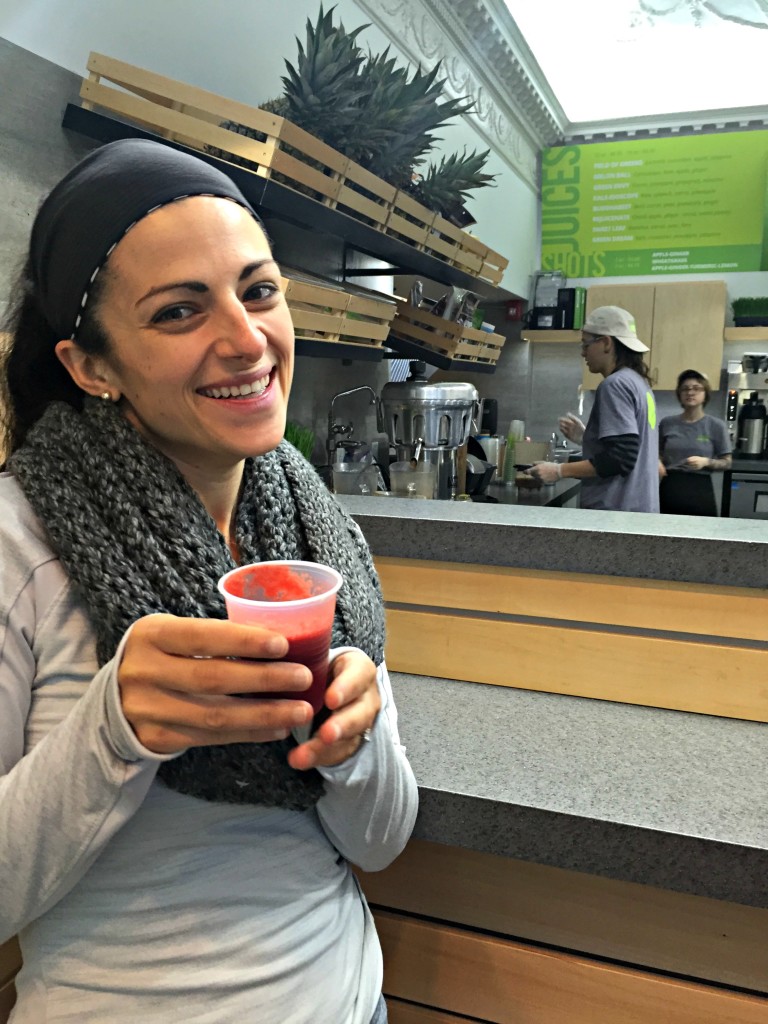 We then sampled a smoothie, the Vitamin “G”reen. It was made with kale, spinach, mango, pineapple, banana, and coconut water. Heather said that for more of a post-workout smoothie, customers have the option to add in protein powder or other boosts such as nut butter.

Next up was a little sip of one of their new winter offerings, the hot cashew chocolate shake.  Made with raw cashews, raw cacao (full of antioxidants), dates, and water, it tasted just like hot chocolate, and I am determined to try to recreate this at home for my hot chocolate loving husband.

Finally, we finished with a shot! We tried the apple lemon ginger turmeric shot, which has a lot of anti-inflammatory benefits to it. The apple cuts into the ginger so it’s not too much, and the lemon adds an alkalinity component to help with the body’s natural balance. The shots were brought out with our other samples on the cutest little slate boards with an orange chaser. I actually enjoyed this little energizing shot so much that I actually just redeemed another free one through my rewards on Wellcoin! 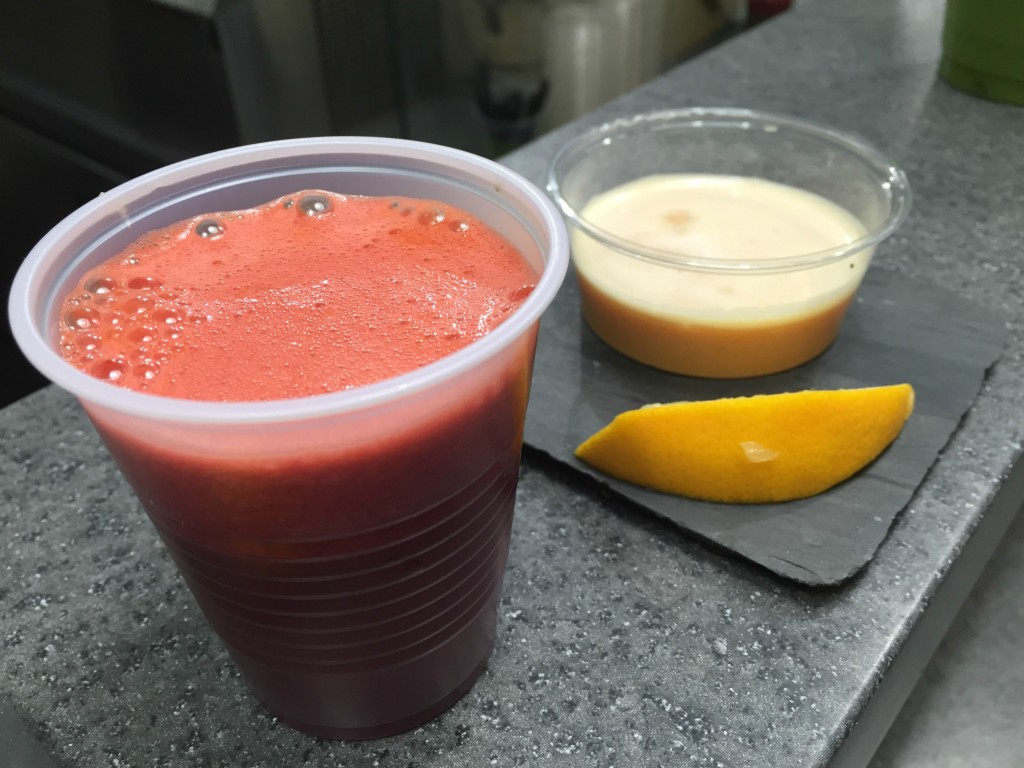 Steph and I had a little too much fun with this:

I highly recommend checking out Thirst Juice Co. if you haven’t already. The only thing I would change besides wanting one to open up near my apartment is that I wish there were tables and chairs to sit and chat over your acai bowl instead of just grabbing them to go. Heather told Steph and me that they actually are opening a second location in Wellesley in the next couple of months, so I’ll just keep my fingers crossed for that option there. I’ll definitely be popping in if I head that way for classes at BTone or HYP!

Let’s chat! Have you ever tried an acai bowl? Where is your favorite place to grab a juice or smoothie? Have you ever been to Thirst Juice Co?

Huge thanks to Heather for her generosity and a fun Saturday morning!

Disclaimer: Steph and I each received complimentary samples at Thirst Juice Co. in exchange for this review. As always, all opinions are my own. Thirst Juice Co. is located on 44 School Street in Boston along the historic Freedom Trail, steps from the State Street, Downtown Crossing, and Park Street T stations. Their entrance is on Province Street.