Yesterday was a fantastic day.

Guess who was back in town?

Jen has spent a few weeks in New York with her parents doing a lot of wedding planning since she won’t be back in the States until her wedding day with the exception of Christmas, and yesterday she trekked to Boston to attend Two A Day Tuesday.  I was SO excited for Two A Day Tuesday yesterday because 1) Jen was back, 2) Liz was back to teaching Kickboxing after being out for what seemed like forever, and 3) it was the first time since Cinco De Mayo that the two of us could stay for each others classes.  A true Two A Day Tuesday!  Like Ashley said in her comment on yesterday’s post, my excitement level was bordering on embarrassment.  100% agree.  Do other people get that excited for the gym!?  I think not.

Anyways, Liz had a fantastic Kickboxing class with a really fun playlist and then I taught Circuit class in the Annex with a workout inspired by my bootcamp program.  To these jams: 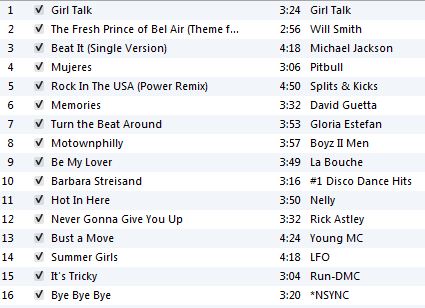 Since Jen was going to be here for only one class, I had a really hard time deciding what music to play.  Part of me wanted to use her good-bye playlist that never was (the farewell playlist I was going to use but we were both sick that week), but I ended up deciding on a little “Yay, Jen is Back” workout mix instead.  Aka, random songs from all the theme playlists I’ve used since February that Jen sadly never got to hear, only read about.  So above you not only have a few from that good-bye list, but you have a little MJ, a little summer, a little Cinco De Mayo, some 80’s, some 90’s, some Hip Hop, and some Valentine’s Day.  Boom.

It was so nice to have our sweaty little gym family reunited.  And someone to outburst in class randomly.  It was like Jen had never left!!

Picture courtesy of Mary (thank you!), and missing a few key people, but hey what can you do?

After class, Jen and I had a slumber party.  I would like to announce that I am officially the worst host in the WORLD, because I didn’t have any type of dinner ready for us and my apartment was in shambles.

I did have these though:

Yep.  Brewskis.  After my workout.  On a school night.  Ashley came over for a bit after class too and we just sat around hanging out and catching up with Jen.  And I didn’t go to bed until after midnight.  You know what?  It felt kind of nice to be “breaking all the rules” on a Tuesday.

Meh now it’s Wednesday.  NOT as exciting as Two A Day Tuesday.  I’m working from home, teaching Spin class on my lunch break, and then I have my dad’s birthday dinner tonight.  Happy Birthday, Dad!!!

Not that your birthday isn’t exciting, Dad, I’m just sad to see my friend go.

At least we have the bachelorette festivities to look forward to on Saturday!!!

When’s the last time you reunited with a good friend?