Most people would probably say more time for sleep.

But I’m just a huge loser and okay with it.

On my lunch break, I made a return to yoga.  Since I’ve been subbing so many classes lately, I have been on a yoga hiatus.   I actually can’t even remember the last time I went to yoga class before Friday, so I was a bit nervous that I’d be really off during class.  I went to Prana for Hour of Power, and to my surprise I wasn’t as “out of it” as I anticipated.  By the end of class I was dripping as usual, but on Friday the instructor didn’t even turn on the heat since it was 99 degrees in the room when we started.  I tend to like Hour of Power classes better than the regular All Levels classes because I like more of a vinyasa style yoga where there is more flow and steady movement through the poses rather than holding the poses for long periods of time, which I think is more of a Bikram style.  Just my preference!  Plus the instructors usually pack more moves into Hour of Power than they do during a regular 90 minute class so sometimes I feel like I get more out of it. 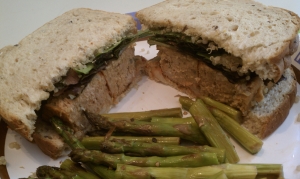 …was pretty much spent in Cleveland Circle.  After a lazy morning, Tim and I ventured over to Cityside with Katrina and Geoff.  We spent the afternoon hanging out on the roofdeck for lunch and beers for the boys / mimosas for the girls.  I ordered the turkey and artichoke panini which was thinly sliced smoked turkey pressed with artichokes, roasted red peppers, parmesan and mozzarella cheese on a panini roll.  Instead of fries, I substituted a side salad.

On our walk back to the apartment, we passed Chill and of course had to stop in for some dessert!  If you’ve never tried Chill, you MUST.  Their frozen yogurt is low calorie and prepared daily.  The flavors are also made with real fruit that are pureed right there on site.   They also have a huge choice of toppings for the frozen yogurt, regular ice cream, frozen drinks, and coffee and tea.

I went with original flavor yogurt, topped with strawberries, mango, and kiwi. 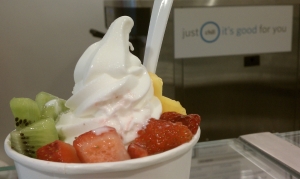 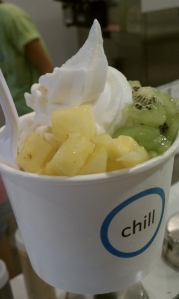 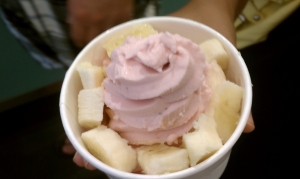 Geoff was too cool for yogurt and went with ice cream instead! 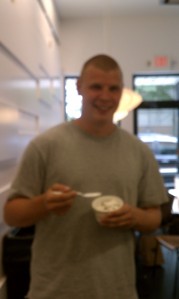 After Saturday’s Chill stop, I’m only five punches away on my frequent buyer card to getting a free yogurt.  If you know me, you can only guess how excited that makes me.  🙂

Saturday night was Slesh’s birthday celebration.  We headed to Tommy Doyle’s in Harvard Square.  I don’t regret the beers I drank, but I do regret the late night pizza fest in my kitchen when we got home.  Ugh.  Dancing in the bar counts as a workout and could make up for that, right?!  Oh well.  It was a fun night.

Check out our lips & staches: 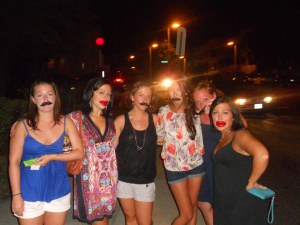 We do take normal pictures too.

…was another lazy morning.  In the afternoon we had Tim’s little cousin’s birthday party.  I actually skipped breakfast which I NEVER do and really do not recommend doing because it’s so bad for you, but I honestly was so full from the pizza the night before that I waited until we got to the cookout to eat.  I was disappointed that there weren’t a lot of healthy options there.  I had some meatballs and a stuffed shell and a little turkey sandwich.  Tonight Tim and I are going to make big salads for dinner since Saturday night and the BBQ today did not consist of the healthiest eating.

Question of the Day: What do you do if you want to make healthy choices but the venue you are at doesn’t have anything that you would normally select?

I’m off to clean my room and pack for Colorado – away for work this week until Friday.  Good thing Colleen and I already planned out our workouts for the week.  You all can expect some healthy living on the road updates from Boulder while I’m away!