What I Ate During the Super Bowl 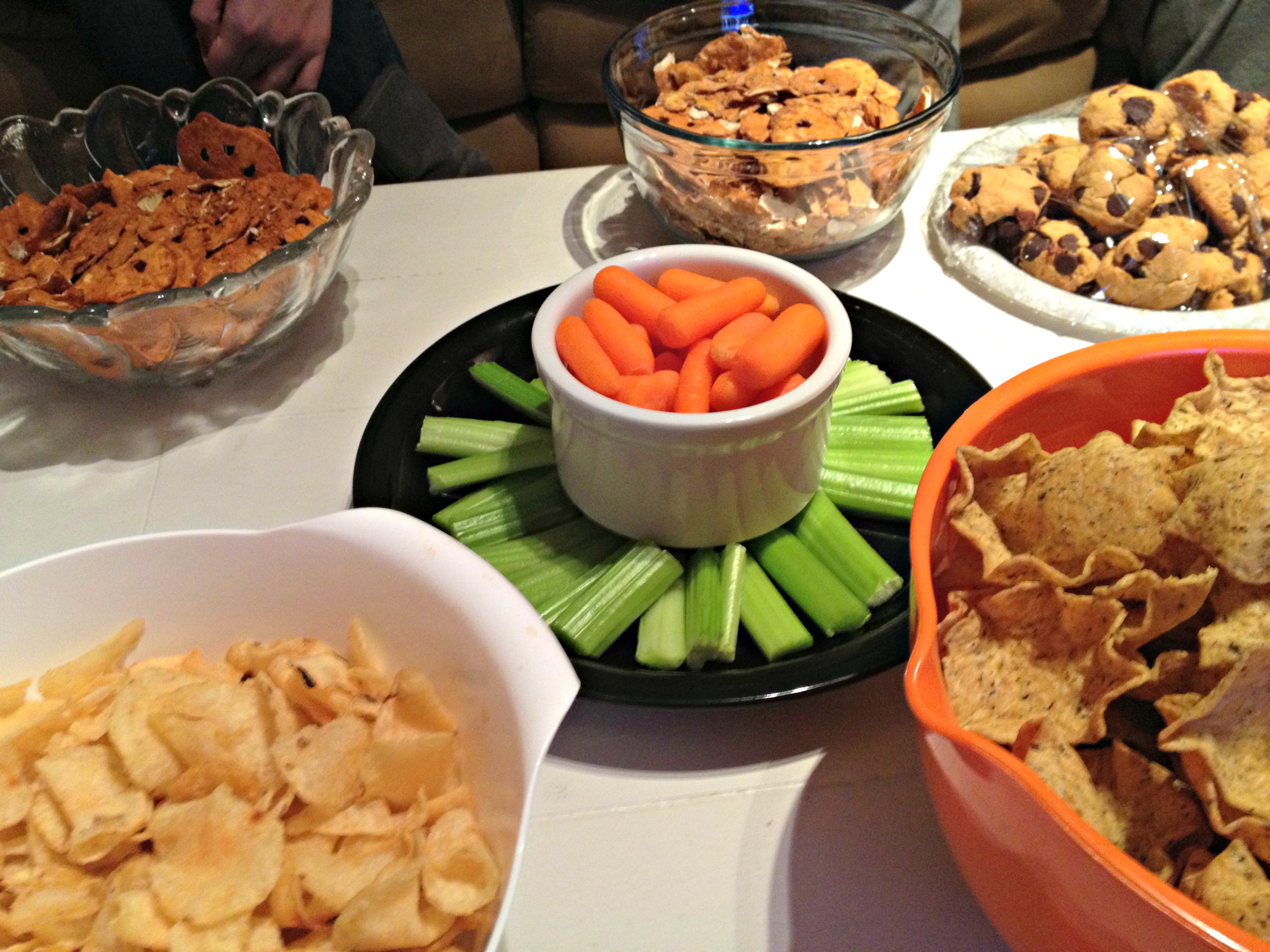 Hello from another snowy morning in Boston! I’m thankful for the snow day and ability to work from home today because my body definitely needed the extra sleep.

Today I want to talk about the Super Bowl. No, I’m not going to talk about anything related to football or the game itself, but instead I want to chat about my experience with navigating the food. I shared on my Facebook page last night that I originally was planning to stay home for the Super Bowl, but I ended up making a super last-minute decision to go out with Tim and his family. Tim’s dad recently started bartending at a local American Legion for some extra money, and since they were having an event, we decided to go support him.

Since my change of plans happened about an hour before we were supposed to leave the house, it means I didn’t have the chance to make anything to bring along ahead of time. You guys know that normally I like to make something protein packed and on the healthier side when I head into social situations where I know there will be a lot of munchies.

Going into the night, I had no idea what the food situation was going to be like. Since the party wasn’t held at someone’s house, I wasn’t expecting a massive spread of food. Also, since we weren’t going to be at a regular bar, I wasn’t expecting your average bar food either. Like I said, I had no idea what to expect except for that Tim’s dad was really excited about his homemade deviled eggs.

I could have let this situation stress me out.

I could have freaked out and demanded we stop to pick up a veggie tray on the way to watch the game.

I could have arrived at the party and refused to eat any of the food that was there because it wasn’t the kind of food I’m “supposed” to eat to “stay on track.”

I could have said eff it when I got there and stuffed my face because today is Monday, and don’t Mondays mean we get to start over and just erase everything we ate over the weekend?

For the record, I didn’t do any of those things. But a past version of me would have! And that’s why I’m telling you guys this story. I’m sure many of you might be rolling your eyes, asking yourself what the big deal is, or thinking that I need to chill out because “it’s just food.”

I’m telling you this because to many people, food is not just food.

Food paralysis is very real and an enormous cause of stress to so many people, especially when there is a sense of having no control over the food you will be around. But that’s just the thing. There’s always control, and the very best kind of control is to trust yourself, regardless of the environment you are in or the foods you are exposed to. It just takes practice to mindfully navigate all different kinds of food situations and the understanding that the practice doesn’t happen overnight.

For the record, I work on this mindset almost every day, and it’s still an evolving process for me.

Here’s how this practice looked for me last night during the Super Bowl, if you missed the live play by play on Snapchat:

–Once I made the last-minute decision to head out for the game, I told myself I would do my very best to navigate whatever food situation was in front of me. Doing our very best is all we can really ask of ourselves, isn’t it? Sometimes just repeating a mantra like “I will do my very best” can change the whole tone of a situation you are feeling stressed about. <—that applies to anything by the way, not just food stress.

–Before I left the house, I ate some leftover farro and chickpea soup so that I wouldn’t be famished upon arriving at the event.

–On the drive down, I drank a lot of water to hydrate. 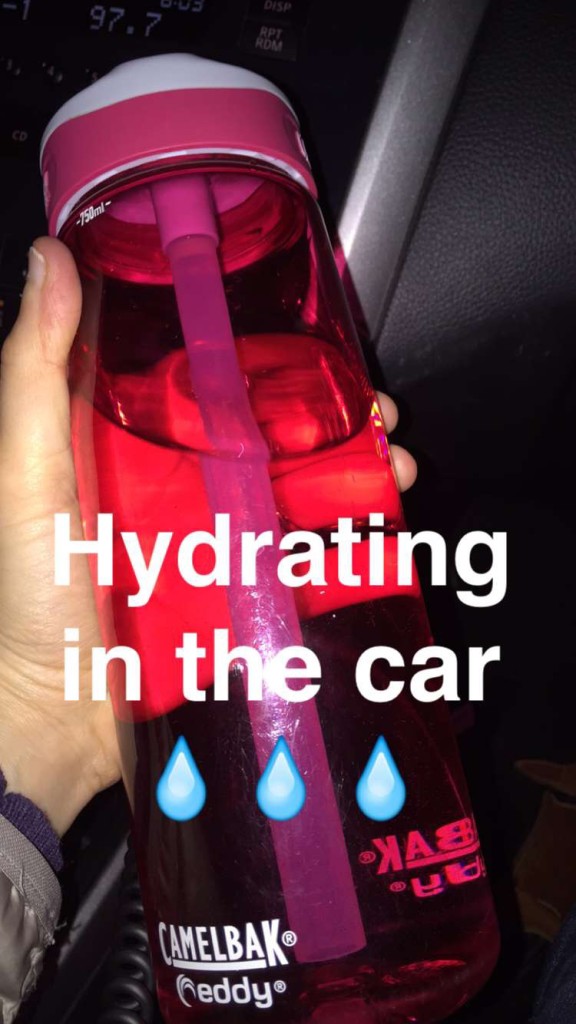 –When we arrived at the American Legion, I did a quick scan of the room. The snack spread included cheese and crackers, pepperoni slices, Fritos, Tostitos, Wavy Lays, store-bought ranch and French onion dips, and hummus. Tim’s dad’s deviled eggs were also out. I got a bottle of water to start, and of course I had to try one of the infamous deviled eggs (made with bacon and mayo). I also put some cheese, crackers, and pepperoni on my plate. I ate two of each, and then gave Tim my third piece of pepperoni because it wasn’t tasting as good as the first piece did. <—First bite rule for the win.

–After I finished my bottle of water, I ordered a beer. We were laughing because they had all types of Sam Adams beer except for the winter. While I enjoyed my Octoberfest, I decided the snacks didn’t seem that interesting enough for me to take any more. I don’t feel like I deprived myself of anything because I was in tune with what I really wanted to eat. I definitely took a Frito off of Tim’s plate (yes, just one), but I also reminded myself that everything that was on the table in front of me was something I can literally go buy ANY TIME I WANT. It wasn’t like last night was the last night I could ever eat Fritos ever again. <—Novelty factor gone.

–At halftime, the food buffet was put out. The options were dinner rolls, Caesar salad, corn on the cob, steak with peppers and onions, and chicken with broccoli and ziti. Nothing that was really my jam, but here’s where you just have to do the best you can regardless of the situation. I filled half of my plate with the salad, took a piece of corn on the cob, and filled the rest of my plate with the steak and peppers and onions. The steak was delicious, and I enjoyed the salad, but the corn on the cob was way too buttery for my liking, so I didn’t eat it and instead went back up for more Caesar. <–Here’s where you have to just trust that whatever you eat that may be a little off from your norm, whether it’s Caesar salad or ziti or whatever, is not going to throw off your entire physique or how worthy you are or all that nonsense. 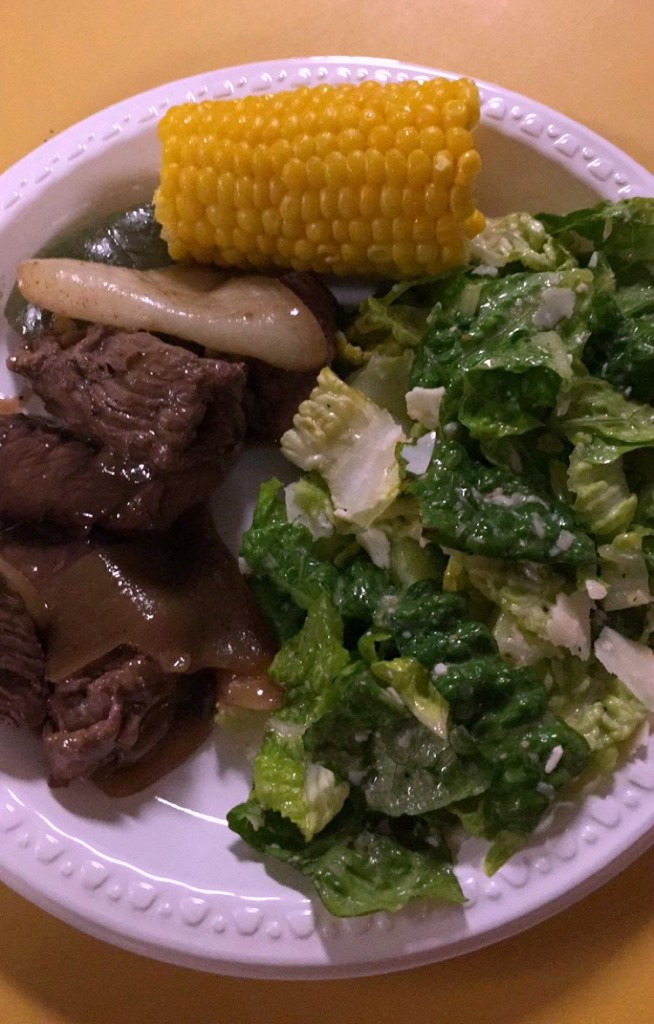 –After dinner, I was really full and drank a few more bottles of water throughout the night until we left. I just didn’t feel like having any more beers (I had a couple out on Saturday night).

And that’s that! Not anything super exciting or earth shattering. Again, you might think “oh, what’s the big deal to eat more than one Frito,” and to that my answer is that it’s NOT a big deal if you truly want Fritos! As long as you eat them mindfully (are you loving every bite?) and aren’t going to beat yourself up about them in the morning (do you feel guilty? are you depriving yourself of calories? are you overdoing it on exercise to “make up for it?”), then go ahead and eat all the Fritos in the world. I just know that all too often, binge eating and feeling like you just have to eat everything in sight because it’s there or because you already “messed up” earlier in the day can actually fuel MORE deprivation later in the week. That’s when the deprivation/binge becomes a never-ending cycle that effs with your head and feelings of self-worth and causes you to be unkind to yourself… and that’s never worth it to me.

I hope this helps give you a little insight as to how I try my best to mindfully navigate food settings that I have no control over. Last night is just one example, and please understand that there are MANY times when I’m not as “good” at the practice as I was yesterday. In fact, every day is different, and there’s really no hard or fast rules about good versus bad when it comes to food decisions: it’s just more about how you FEEL after the food choices you make. And today, I woke up feeling good. No feelings of deprivation. No feelings of guilt. No stomachache. I’m just proud of myself for not going balls to the wall on those cheese and crackers (definitely the snack I tend to go overboard the most with!), and I’m happy I didn’t let the fear of food cause me to miss out on a fun night with my husband and in-laws.

P.S. Did anyone else notice the horrible kettlebell swing form in the Fitbit Blaze commercial? My friend Ashley and I were texting about how atrocious it was!