You Will Get There

Last Thursday was the first morning class I’ve taught in a while that felt like my usual crowd again. To say attendance has been wonky with all the stupid snow and cold temps in Boston lately would be an understatement. But last week many of my regulars returned, and it definitely helped me find the instructor energy that I’ve really had to dig deep for with the low class numbers this month.

I also had a couple of new faces in class. With my morning crowd usually being so regular, it’s pretty easy for me to spot newbies or at least members who haven’t been to class in awhile. To make everyone feel as comfortable as they can (it’s always a little intimidating to try a new class!), I always make sure to welcome anyone who might be new when I introduce myself and get class going, I explain that my classes are a mix of both cardio and strength training and that I try to switch things up every week. Most importantly, I tell everyone to please work at a pace that works for them. Whatever feels right one morning might not necessarily be the case week to week, so I usually set the tone by saying as long as everyone is listening to their bodies but also choosing something that is challenging for them, that they will get a lot out of the class.

Last Thursday I taught my sit, sit up, stand, crawl, and jump workout. 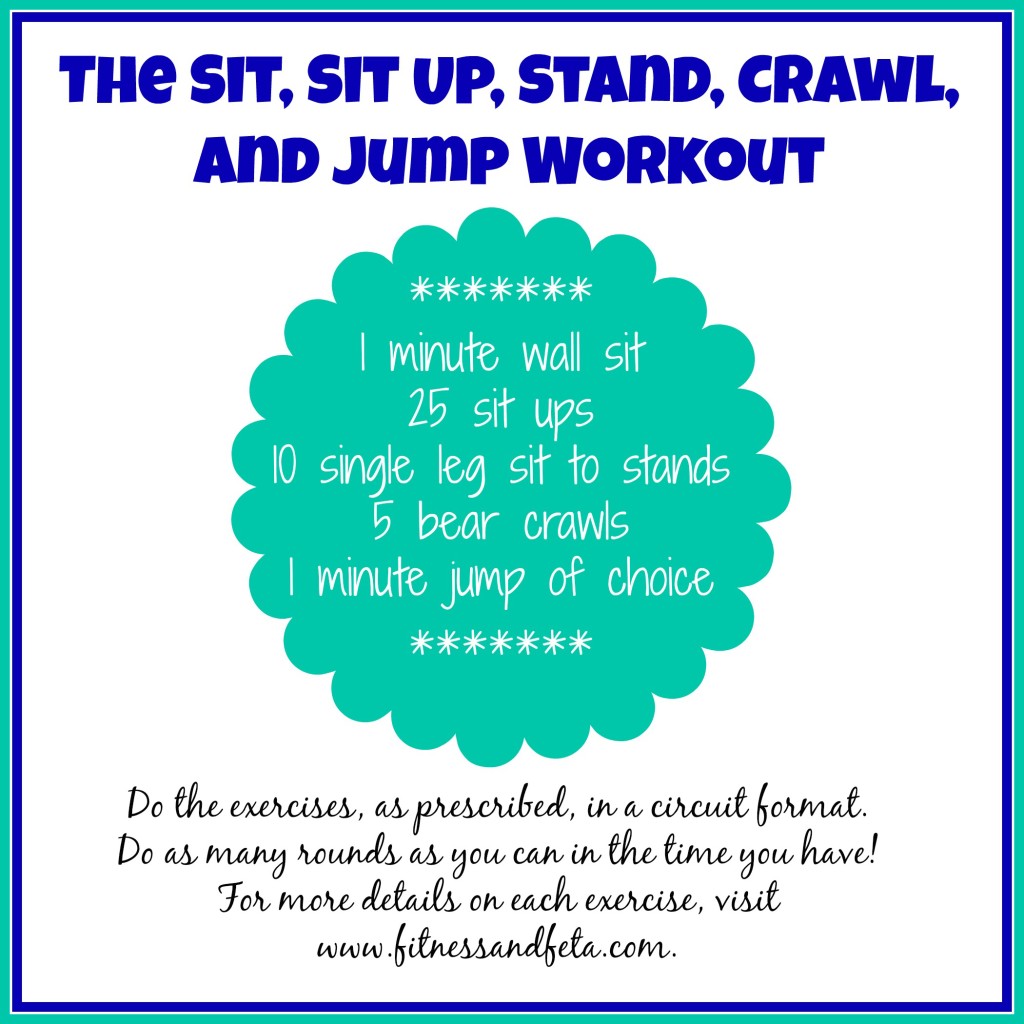 I’ve done this both a few times in class and on my own, and it gets me every time. It is not an easy one. I gave modifications for most of the moves, but I did forget to give a modified option for the bear crawls. For those of you who don’t know what a bear crawl is, check out this video from Girls Gone Strong/Molly Galbraith, and fast forward to a little after two minutes.

Anyways, as the class was doing their bear crawls during one of the rounds, one of the new girls happened to be right next to me. She stopped where she was and asked me if there were any modified versions of the bear crawl that I could show her. I gave her a couple options such as doing less reps and only going forward instead of the forward and backward combo we were doing. I also showed her how to do bear crawl holds without actually crawling and gave her the option of balancing in the bear crawl stance while lifting either a hand, a leg, or both in opposition. Finally, I said that spiderman planks were perfectly fine too.

After I explained each one, she looked up at me with a big smile and said something so simple.

“Thanks. I will get there.”

She didn’t get frustrated with herself.

She didn’t say that she couldn’t do it.

She listened to her body, spoke up, and chose to do something that was still challenging for her current fitness level instead of nothing at all.

She didn’t give up.

I gave this girl the biggest smile back and said, “Yes. You WILL!”

All of this took about 90 seconds total, but I’m still thinking about that moment in class. It made my heart so HAPPY. Too often we are so quick to say “yeah… no” when something seems a little bit out of our comfort zones. I’m guilty of it too, but whenever we say that we can’t do something, we just reinforce that message in our minds.

Instead, we need to all approach challenges with the words CAN and WILL. It makes a world  of difference in what we are actually able to do.

So next time you find yourself telling yourself you can’t do something, no matter in what context of your life, stop the negative self talk and think of the bear crawl girl. You aren’t any different from her.

And you will get there too. <3

Readers, let’s chat! Do you find yourselves using negative self talk and saying “I can’t do that” when something seems challenging? If so, how can you start saying that you can and will instead? For those already embracing positive self talk, what advice do you have for those who are still working on it?